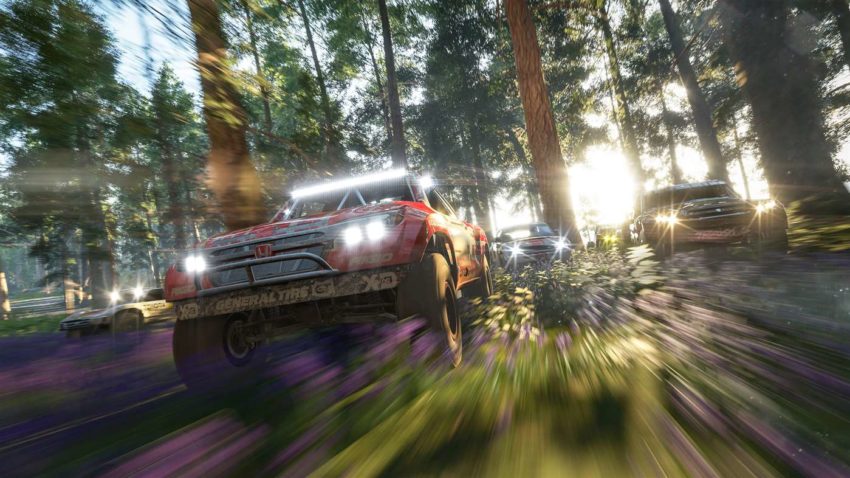 There is no official Forza Horizon 4 car list, but we do know about some of the vehicles in the game thanks to the trailer and the gameplay footage.

Microsoft confirmed that there are over 450 Forza Horizon 4 cars from more than 100 manufacturers. Thanks to the intrepid fans on the Forza Motorsport Forums we know many of the cars already from the list. Here’s a look at what we’ve picked out and what the community has discovered.

Some of these cars may come as part of Day One DLC. We expect to learn more about the cars over the coming months.

We saw a Hovercraft in the trailer, but that’s definitely a boss that you need to take on. Other vehicles you don’t likely get to drive include tractors and snowplows as well as some of the traffic.

Motorcycles appear throughout Forza Horizon 4 trailers and gameplay, but there is no indication yet that you get to drive them.

You can place your Forza Horizon 4 pre-order now through most gaming retailers or through the Xbox.

You can also skip the pre-order and play Forza Horizon 4 on Xbox Game Pass. GamePass is $9.99 a month and includes Forza Horizon 4 and many other Microsoft exclusives. Here’s more on if Game Pass is worth buying.

There are two main Forza Horizon 4 gameplay videos out that show us what it is like to play the new Forza Horizon. First up is the video above from IGN that offers a 9-minute look at Forza Horizon 4 in the McLaren Senna, an off-road truck, a rally car and others.

The next video is from BlackPanthaa, who walks us through some of the menus, controls, and explains how the game plays. We get a great look at the environment with wet roads, construction and potholes as well as other environment features.

The Forza Horizon 4 map is about the same size as the Australia map in Forza Horizon 3. With that in mind expect it to grow with add-on sections that come as DLC.

We don’t have a full look at the new Horizon 4 map yet, and it will likely be a little while before we are able to put that into perspective.

The Forza Horizon 4 location is set in Britain. This wasn’t the first choice for the setting, but it allows them to use Seasons to change play.

You will play through each of the four seasons during Forza Horizon 4. These will change slightly each week, and switch between seasons as you go. There will be changes to the event types and to the environment. This will be little things, as well as big things — like driving over a frozen lake to an island that wasn’t available in the Spring.

When the game start you will play in Summer and then in the course fo a few hours, you get to experience all of the seasons. Once you get to the live server you will be playing a season for a week or so, and then it will switch.

In the video above, we get an overview of the new features and how things work. When the seasons change, you will see differences each time. This could be vehicles, buildings, traffic or even Forzathons.

While the game handles 72 players in a world, you will not be playing next to all of those players each time. Your friends will be in your session more than random players. The same goes for your crew in Forza Horizon 4.

You can buy 10 properties in Forza Horizon 4. This allows you to buy houses or garages, where you can keep your cars. You can also buy businesses, including a taxi business. More info is coming about the properties.

A new route creator allows you to better outline a race for your crew or friends to race on. There is some hope that you will be able to set up specific checkpoints.

Driver choices ramps up in Forza Horizon 4, but we don’t have full details about the game.

It also sounds like we will see more car customization options, but we are waiting on new details about what you can

The standard Forza Horizon 4 edition is $59.99 and it includes the base game as well as the Formula Drift Car Pack.

The Forza Horizon 4 Deluxe edition is $79.99 and includes the Formula Drift Car Pack and the Forza Horizon 4 Car Pass. The Car Pass is normally $29.99 as a standalone purchase, so you save $10 with this edition.