Last week Samsung unveiled its latest and greatest smartphones. The Samsung Galaxy Note 5, and the big curved Galaxy S6 Edge Plus. These two high-end 5.7-inch powerful Android smartphones have a lot to offer, but will need to compete with many other impressive phones. Here we’ll detail six or so key differences between the Galaxy Note 5 and the LG G4 for potential buyers.

On August 13th at the annual Samsung Unpacked event in New York City, Samsung announced both of these phones. One is a successor to the Note 4, and the other is just a big and beautiful neat curved smartphone. Samsung’s Note 5 has a few huge changes from previous years, things that users need to be aware of before making a purchase.

The new Samsung Galaxy Note 5 is a fantastic smartphone built out of all glass and aluminum. It no longer feels like a cheap plastic Samsung phone, which is one of the many differences between it and LG’s latest G4 smartphone. Prospective buyers will want to read on for all the details about both smartphones. 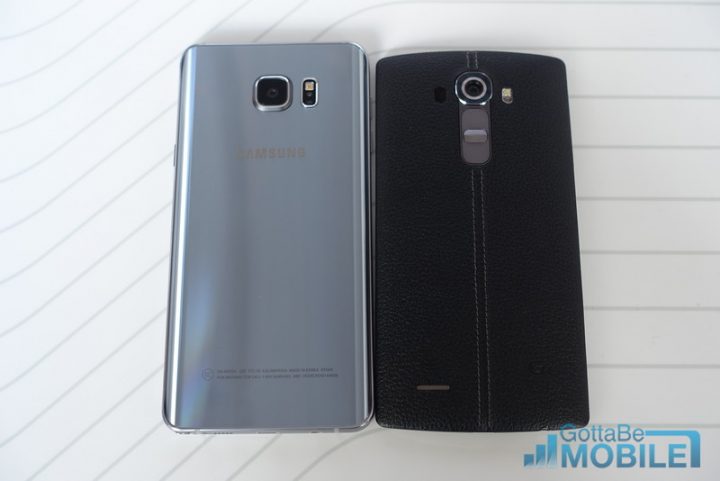 LG has a slight lead on Samsung as its G4 hit shelves in the United States and around the globe during the first week of June, a little after the Galaxy S6. And while it’s been trying to compete with it, due to having a large 5.5-inch screen it’s also taking on Samsung’s new Galaxy Note 5.

The Note 5 is more of a content creation or consumption device, and great for business users, but thanks to a great design and a huge screen will be bought by millions or regular smartphone users as well. That means everything from the LG G4, Moto X, Nexus 6 and more will all have to compete with it.

Now that all the rumors have been put to rest, the Galaxy Note 5 is official, and it’s set to be released on Friday, August 21st, buyers will want as many details as possible. And while there are lots of differences between these two high-powered devices, the six slides below will go over what we feel are the most important details and differences overall, and for buyers.