With the Samsung Galaxy S20 here and the OnePlus 8 Pro coming soon buyers have some tough choices to make. With similar huge screens, powerful cameras and sleek designs, which one is right for you?

In this Galaxy S20+ vs OnePlus 8 Pro comparison we’ll go over everything you need to know about both, and how the specs and features compare to help you choose your next phone.

Samsung just released three different versions of the Galaxy S20, and it looks like you’ll have more than one option from the OnePlus 8 as well. And while this makes the choice more difficult, you’ll also get different screen sizes and several price points to choose from. 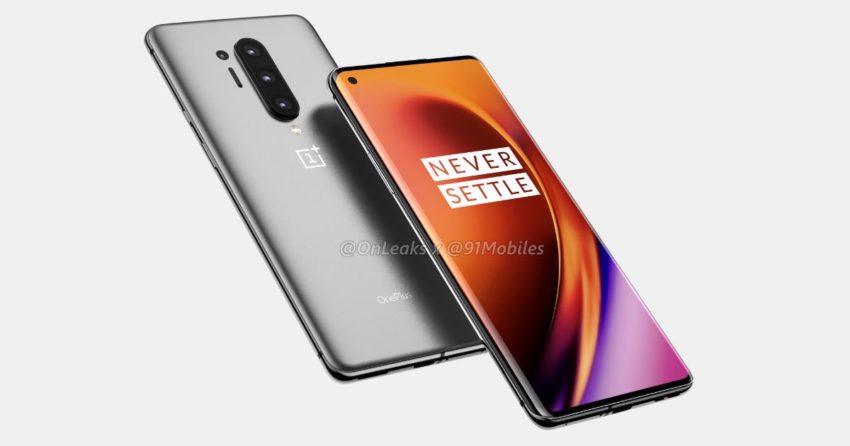 Considering the OnePlus 8 Pro is still just a rumor at this point some of this information could change between now and the release date. That said, we know everything about the Galaxy S20+ and have lots of leaks regarding the OnePlus 8 Pro to help us fill in any potential blanks. Here’s the rundown.

As you can see, these two phones are very similar in several ways. Not just in overall looks, but under the hood. They both have a similar screen size, resolution, and high refresh rate. Furthermore, OnePlus is using a Samsung display in the phone so the screens might not be all that different from one another.

Both phones will have plenty of power thanks to the latest processor technology that will allow for a smooth user interface, video streaming, or gaming experiences. They both have plenty of storage, lots of RAM, and optional upgrades. The Galaxy S20 comes with 128GB of storage, which is more than enough for most. The OnePlus 8 Pro however, will likely come with 64GB to keep the price down, then have optional upgrades to match the Galaxy S20 at 128GB or even go to 256GB for more money.

The two biggest differences between these phones will be the camera experience, where Samsung usually wins, and software. Then things like a microSD card for storage expansion, wireless charging, and water-resistance. All of which we can confirm on the Galaxy S20 but doubt will be on the OnePlus 8 Pro.

What it really comes down to is the screen size, cameras and pricing for most people. So, we’ll break down those areas with a few more details for potential buyers.

Last year OnePlus put the front-facing camera in a mechanical part that popped-up from the top of the phone when you wanted to use the front camera. Resulting in a big bezel-free screen with no notch like the iPhone, and no camera cutout holes like Samsung. It was beautiful, but it looks like they’ll take a different route this year.

Instead, the OnePlus 8 Pro will have a hole in the screen for the front camera, just like the Galaxy S20 series. Basically, they’ll probably look almost identical from the front. 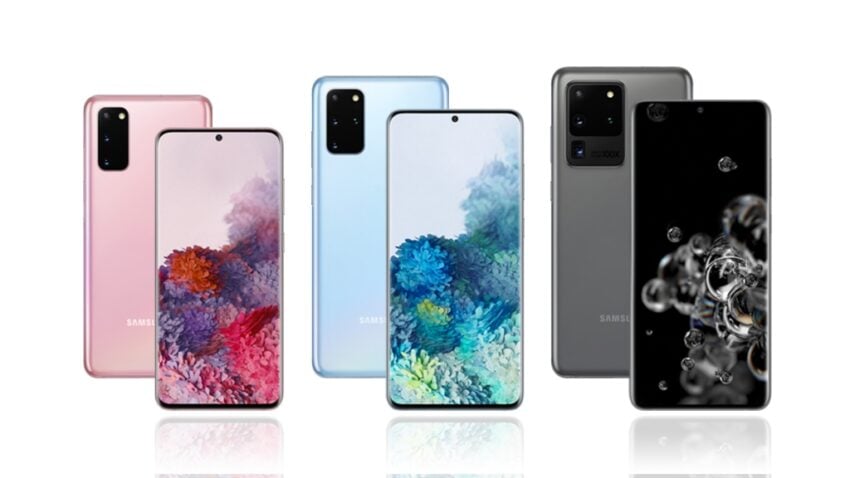 The screen size is the same, resolution is nearly the same, and they both have 120Hz high refresh rates. This year OnePlus is going from 90Hz to 120Hz, where the screen refreshes 120 times per second. Users will notice both devices feel faster, more smooth, and more responsive thanks to this technology.

As for the cutout in the screen for the front-facing camera, they are slightly different. Samsung put it in the middle (shown above) and claim it’s smaller than it was on the Note 10, while OnePlus opted to put the cutout on the left side. Notifications will work around the cutout, so that shouldn’t be a problem on either phone. 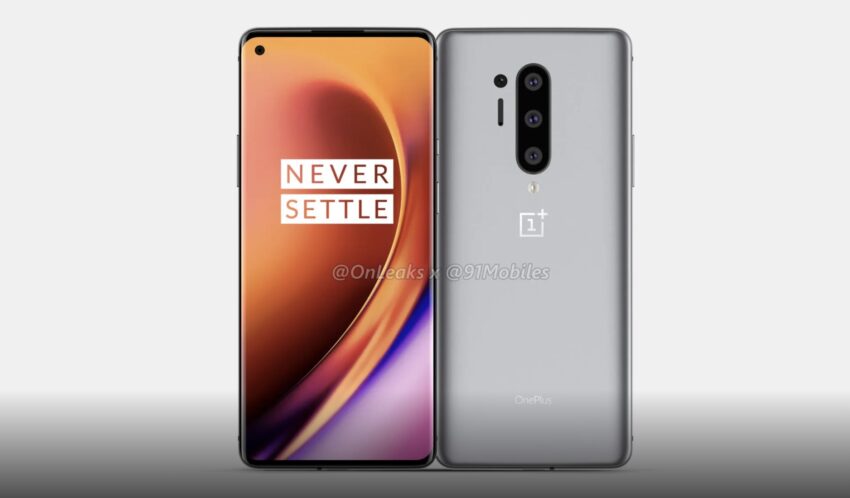 Both phones have curved glass displays, a metal frame, and glass covering the back too. Both phones will be quite fragile and you’ll want a case. We don’t know for sure the screen sizes from OnePlus this year, but we’ll update this post once we know more. As for Samsung, the S20 lineup comes in 6.2-inches, 6.7-inches, or a massive 6.9-inch Galaxy S20 Ultra.

Next, we want to briefly mention the cameras on both of these phones, as that will be the strong suit and selling point for many. Both the Galaxy S20 and the OnePlus 8 Pro will have Quad-Camera systems on the back. That said, users only have access to the three main cameras. 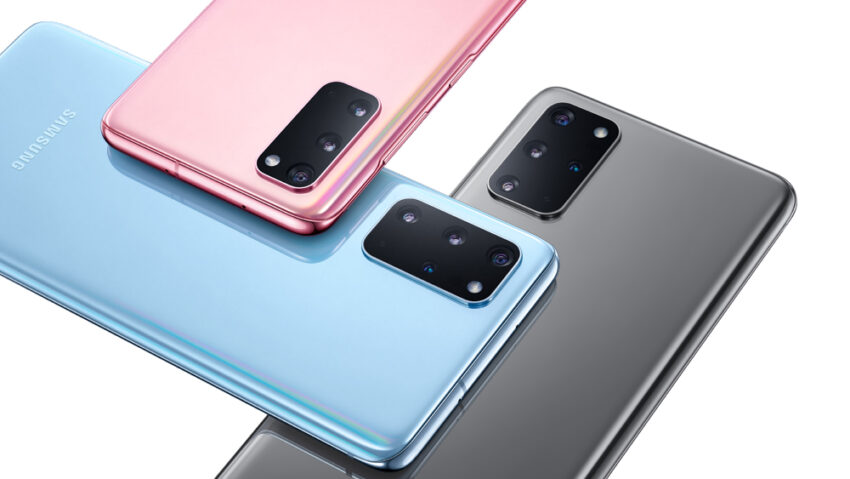 Again, two similar overall setups with a different approach. Samsung is using an upgraded yet similar main camera as previous models, which takes great photos. Then, they’ve updated the telephoto camera to something new that does 3-30x optical and digital zoom, and so far the results we’ve seen are excellent. Furthermore, that lens can take 8k video.

Then, OnePlus will reportedly use a huge upgraded 60MP main camera for daily photo and video, then a similar setup as previous models for telephoto zoom, wide-angle photos and more. With a 60MP camera, we’ll likely see 8k recording from OnePlus, too.

If we had to guess, the Galaxy S20+ will be the better of the two, as Samsung typically leads the pack when it comes to camera performance. Plus, early reviews suggest the Galaxy S20 family has an amazingly capable camera setup.

Another area both of these phones will be much improved over previous models will be in the battery life and charging department. Samsung finally added bigger battery cells and faster charging with the Galaxy S10 last year, and they took both of those even further this year. Then, battery life is always somewhat of a weak spot for OnePlus phones, but not with the upcoming OnePlus 8 Pro.

In fact, these two phones have basically the same screen size, the same battery size, and overall battery life will come down to software and optimizations. That said, the OnePlus 8 Pro has the company’s WARP fast charging technology, which will charge it almost twice as fast as the S20.

We won’t know more about battery life until we see just how much the big 120Hz screens and 5G speeds drain the battery. Either way, if OnePlus does deliver 50w charging, they’ll be the clear winner here, not to mention stock Android is a little more efficient than Samsung’s One UI software overlay.

And finally, we want to talk about the release date and pricing for these phones. Obviously, when they’re available and how much are two very important topics — especially the pricing.

As we said earlier, the Galaxy S20 release date is March 6th, following the launch event on February 11th. They’ll all be very expensive, and OnePlus will surely be the cheaper option.

Yes, those are super expensive phones, there’s no other way to say it.

Unfortunately, we have no solid details on a OnePlus 8 Pro release date yet, but with the Galaxy S20 finally here expect the OnePlus 8 Pro leaks to ramp up. Based on previous years, OnePlus will likely announce the OnePlus 8 around the end of March or early April and release it near the end of April. The OnePlus 7 came out in May, but they can’t afford to be that late with how good the S20 is. 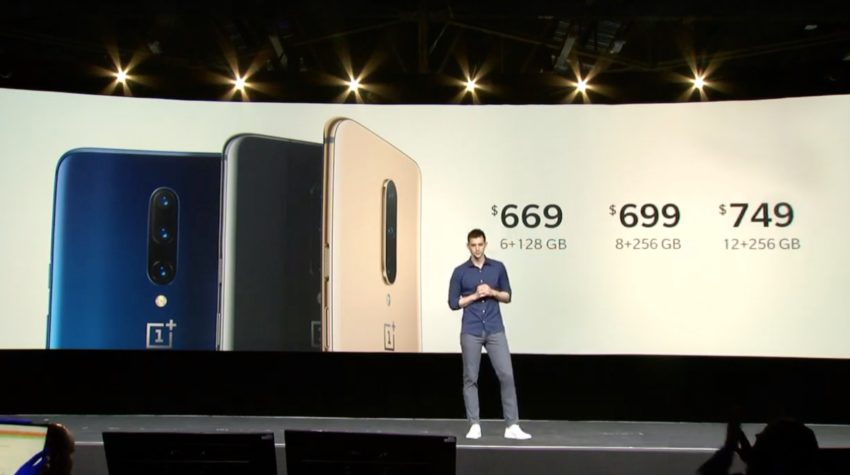 As you can see above, OnePlus is usually pretty aggressive with its pricing strategy. That said, we have a feeling this year they’ll come closer to Samsung pricing than many expect, which will make the choice even more difficult. We’re hoping they’re able to keep pricing around $749 and $849, giving them a good $200+ buffer over Samsung. We’ll have to wait and see. These will both be expensive phones, but you can save a few hundred by choosing OnePlus.

Then again, it’ll probably be worth it to buy that highly impressive Galaxy S20+ and enjoy it, instead of waiting a few more months for the OnePlus 8 Pro.

In closing, it’s hard to completely compare these two phones this early, and we’ll have a lot more information once we get our hands on the Galaxy S20 for some testing. Plus, as we said earlier, some of this information could change once we see what OnePlus has been working on for the last several months.

Either way, these are stacking up to be two of the best smartphones for the first half of 2020, if not the entire year. You should definitely consider waiting for and buying one of these instead of something released last year.