Ubisoft’s confirmed Tom Clancy’s Ghost Recon Breakpoint and it’s on sale right now ahead of a release later this year. If you decide to pre-order a copy of the game, make sure you buy the correct version for your interest level and budget.

As expected, Ubisoft’s announced the successor to Ghost Recon Wildlands. Like Wildlands, Breakpoint is an open-world game that can be played alone or with friends in an exciting co-op mode. There will also be a competitive multiplayer mode.

In the game you play as a Ghost, an elite special ops soldier. Your fellow soldiers have turned against you and you must now fight behind enemy lines. It’s an exciting premise and the game is definitely worth a look if you’re in the hunt for a game to play with friends.

Assuming the game doesn’t get delayed, it will arrive ahead of the holidays on October 4th. This is the release date for Xbox One, PlayStation 4, and Windows PC. There aren’t any plans to release the game for Nintendo Switch.

Retailers around the world are taking pre-orders and there are some benefits to putting in an early order. For one, you’ll be able to take part in an early beta. You’ll also snag some interesting pre-order bonuses that could be of interest to those that like to customize their characters.

If you do decide to pre-order, you’ll need to choose between four versions of the game. There’s a standard version, a Gold Edition, an Ultimate Edition, and a Collector’s Edition. Each has a different set of bonuses as well as a different price point.

In this guide we’ll take you through each Ghost Recon Breakpoint edition and help you decide which version is the right one for you.

The cheapest version of Ghost Recon Breakpoint is the $60 standard edition. The base version of the game comes with a copy of the game and some pre-order bonuses. These include: 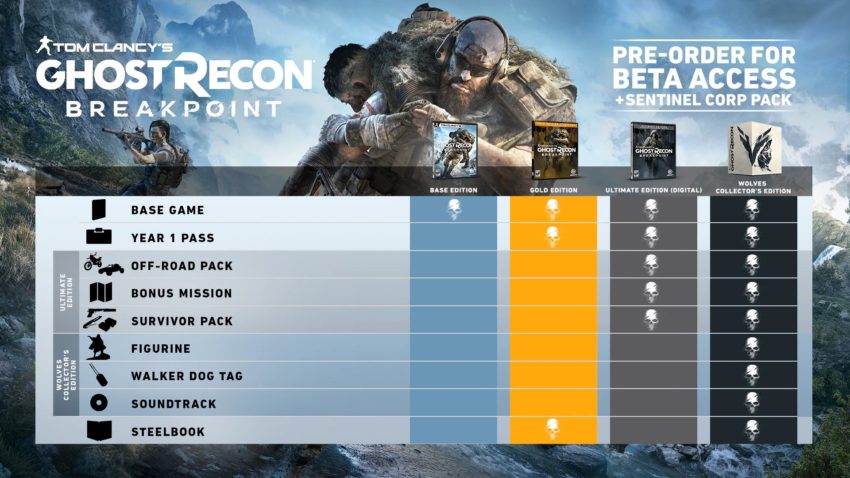 We don’t know when the Ghost Recon Breakpoint beta will start, but those who pre-order automatically get access to the early version of the game. If you don’t pre-order, you can signup for a chance to participate.

If you don’t want to pay $60 for the standard edition keep an eye out for deals as we approach the release date. Retailers like NewEgg often take 5-10% off pre-orders.

If you pre-order a copy via Best Buy, you’ll get a $10 credit if you’re a My Best Buy member. You can use that credit toward another game or something else at the retailer.

This is the most basic version of Breakpoint, but it’s probably the version most people should buy.

Who should buy the standard edition?

You can buy the standard version of the game at Amazon, Best Buy, GameStop, the Microsoft Store, NewEgg, and the PlayStation Store.

If you want a little more from your pre-order, you might want to check out the Gold Edition. 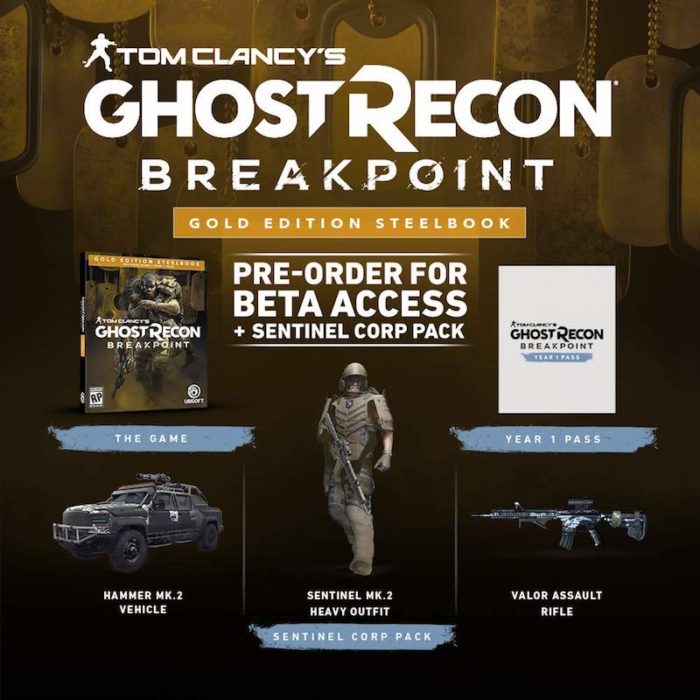 The Ghost Recon Breakpoint Gold Edition is far more expensive than the standard edition, $109.99 vs. $59.99, but you get a lot more with your purchase.

In addition to beta access and the pre-order bonuses, you get access to the game three days early, a steel book case, and the year one pass which includes two DLCs, a launch mission, early unlock for three new classes, and the Spec Ops Forces Pack.

So who should spend the extra money on the Gold Edition?

You can buy the Gold version of the game at Amazon, Best Buy, GameStop, the Microsoft Store, NewEgg, and the PlayStation Store.

For a little bit more you can snag the Ghost Recon Breakpoint Ultimate Edition. The physical version of this bundle is exclusive to GameStop. 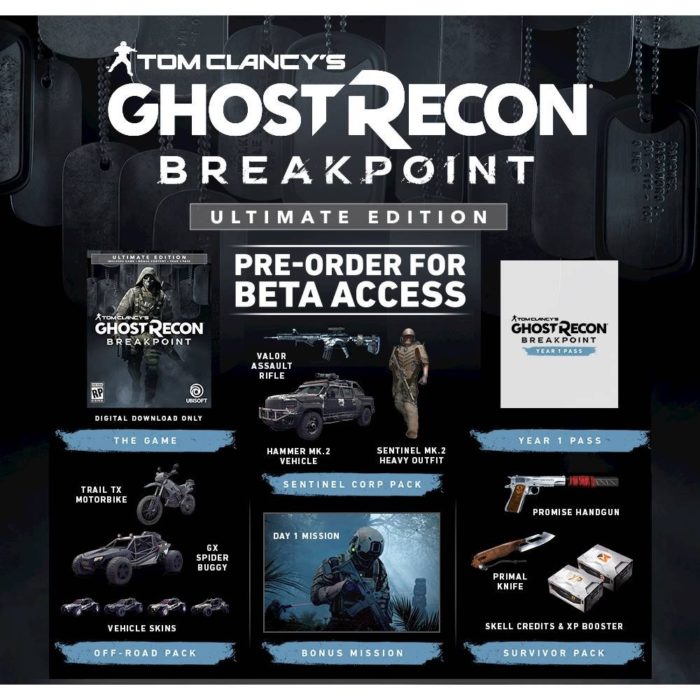 The Ultimate Edition includes the pre-order bonuses, access to the beta, three days early access, the year one pass, the Off-Road Pack, the Survivor Pack, and a Bonus Mission. So for $20 more than Gold you get two additional packs and a bonus mission.

So who should buy the Ultimate Edition?

You can buy the physical version of the Ultimate Edition at GameStop or the digital version at Best Buy. 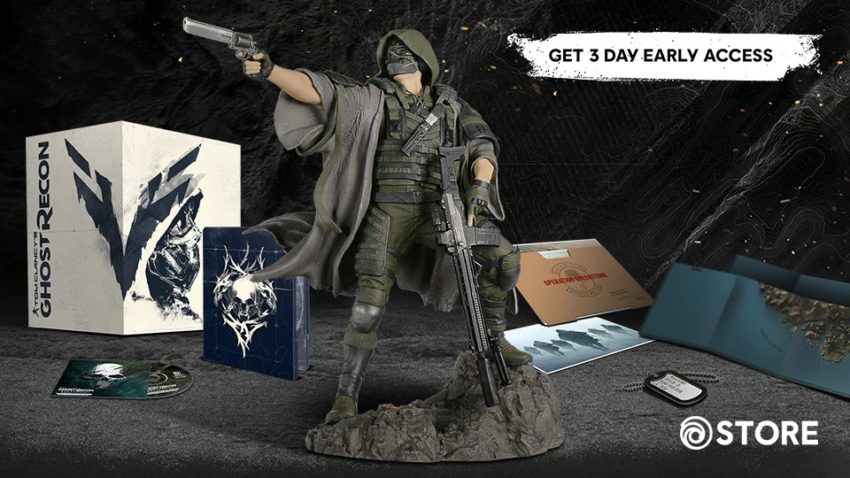 The Ubisoft Store-exclusive Ghost Recon Breakpoint Wolves Collector’s Edition comes with a mind-boggling number of items including the pre-order bonuses, beta access, the year one pass, the Off-Road Pack, the Survivor Pack, a Bonus Mission, and these unique items:

The collector’s edition is aimed at collectors and huge fans of the series. Most people should go with one of the cheaper editions. The Collector’s Edition is a whopping $189.99 on the Ubisoft Store.

Ghost Recon Breakpoint comes in both digital and physical formats. There are some key differences between the two and you’ll want to buy the right one for your situation. 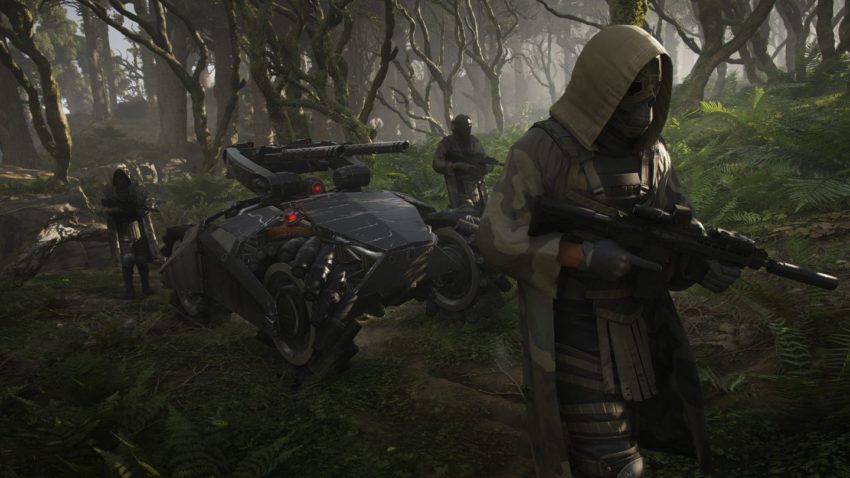 Here are a few reasons to go with the digital version of the game:

Here are a few reasons to consider going with a physical copy of the game: