Fortnite Battle Royale, known often just as Fortnite is the most popular game out there in 2018 and there is a good chance that your kid is asking to play it. This is what parents need to know about Fortnite and if Fortnite is safe for kids to play.

The biggest appeals are that Fortnite Battle Royale is free to play, it works on iPhone, iPad, Mac, PC, PS4 and Xbox One and is coming to Android soon. That means kids can get started playing by downloading the free game on almost any device.

We’ll walk you through everything that parents need to know about Fortnite and Fortnite Battle Royale. 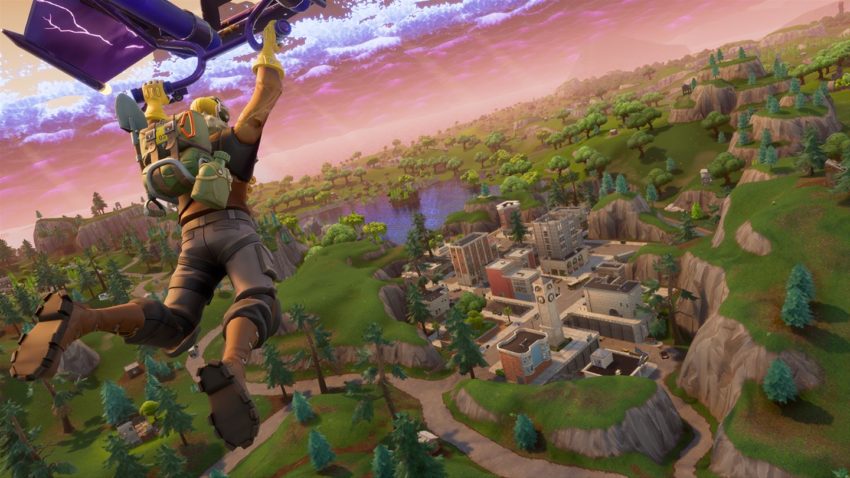 Is Fortnite safe for kids? This is what parents, need to know.

Fortnite is a third person shooter that includes building elements similar to Minecraft. At the start of a game the player skydives and then glides into a map with 100 other players. Once the player lands they can collect resources with a pickaxe and search for guns. From there players need to build defenses and take out other players as the map size shrinks. The game ends when only one player or one team is left.

A game of Fortnite can last 2 minutes if the player dies quickly or it may last 20 minutes if they make it to the top 10 or if they win. Every game is different, which is part of the appeal.

Players can choose to play solo, duo or squads with one, two or four players on a team. When playing on a team there is voice chat with other players on PS4, Xbox One, PC and Mac, but not yet on iPhone or iPad.

What Violence is Shown in Fortnite?

Fortnite is a very cartoony game, so there is not gore or realistic fighting like you see in PUBG. When you kill another player a robot swoops in and takes them away, leaving loot for the player to pickup. There are no knives in the game, but there are many guns as well as other weapons like a rocket or a boogie bomb which forces the enemy player to dance before you kill them.

Common Sense Media says the game is good for kids 13 and up, while most parents rate it as good for 11 and up.  Kids rate the game as good for ages 10 and up. You can read parent reviews of Fortnite Battle Royale to see what other parents think about the game.

Ultimately the decision comes down to if you want your kid playing a game with shooting, even if it is not as graphic as Call of Duty: WWII, Battlefield 1 or PUBG.

Fortnite Battle Royale is totally free to play. There are in-game purchases that allow you to buy V-Bucks which can be used to buy a Battle Pass that unlocks the ability to earn cosmetic items like outfits, new gliders and other things that make the in-game character look special. These are cosmetic only and don’t help you win, but kids may want to spend money in the game.

A Battle Pass adds roughly 75 to 150 hours of content to the game for 950 V Bucks, or about $10. You can also buy cosmetic items directly in the game for V-Bucks. V-Bucks are sold in four increments from $9.99 up to $99.99. The more you buy at a time, the more bonus V-Bucks you get. Watch out for scams offering free V-Bucks

One common concern after watching mainstream coverage of Fortnite Battle Royale on TV is that the game is addictive. There are some reports of kids getting sucked into playing the game and avoiding responsibilities and other commitments.

Ultimately parents will need to monitor gaming time and where kids are playing. It’s a good idea to set limits on playtime and to occasionally play the game alongside your kid to see what is happening and to help keep those limits in place.

The random nature of each Fortnite game helps make the game more appealing and with each game being different from the last. This can easily convince gamers to play another and another game.

One upside to this game is that gamers can play alongside friends on a team, which means kids aren’t shutting themselves out of relationships with friends. There is a good chance your kid wants to play Fortnite with their friends over the Internet.