The first of many Madden 15 deals is here and it cuts the cost of Madden in half with a Madden 25 trade in. That’s just the up front savings. If you count the added $10 you get towards another game this Madden 15 deal drops the price to just $15.

Madden 15 deals like this won’t come along every day, and may not appear again until well after the Madden release later this month. This is such a good deal you could buy a used copy of Madden at GameStop and still make a few dollars on Best Buy’s Madden 25 trade in deal.

Yes, this Madden 15 deal drops the price to just $15 after you collect the Madden 25 trade in, a $10 coupon and another $10 in rewards towards another purchase. Of all the Madden 15 deals we expect to see over the next few weeks this is the best one you’re likely to see. 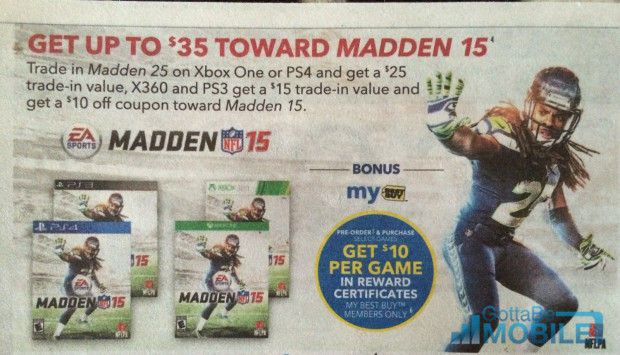 Madden 15 deals cut the price to $15 with a Madden 25 trade and a free Best buy membership.

In order to take advantage of this deal you’ll need Madden 25 for Xbox One or PS4. You’ll need to trade it in this coming week, and you’ll need a free My Best Buy membership to get all of the savings.

The Madden 25 trade in value is already high at Best Buy.

In addition to this you also get a $10 My Best Buy reward after you pre-order and purchase the game. This pushes the savings to $45 and $35 respectively. Even though you can’t use this until after you get Madden 15 it’s an incredible deal.

To score the king of all Madden 15 deals and get the most for your Madden 25 trade in you will need to wait until Sunday August 10th when the deal starts. You’ll also need to go to a Best Buy store, rather than buying online. The higher Madden 25 trade in value is already live, but there is no mention of the coupon code online.

Some Best Buy stores offer a midnight Madden release, but not as many as for a new console or for a game like Destiny, so if you do get this offer you may not be able to play at Midnight.

You can take advantage of this Madden 15 deal on any of the consoles listed, even if you jump from the Xbox 360 or PS3 to the Xbox One or PS4. If you plan to upgrade to the newer consoles this year, this is a great time to do it, before all of the fall and holiday releases arrive.

When you trade in you’ll be without Madden 25 for about two weeks, but you can sign up for EA Access later this month to play Madden 15 early and carry the progress over to the full game you get with this offer.