The No Man’s Sky release date is just a few hours away, which means there is not much time left until you can play this exciting exploration and planet forming game.

As the No Man’s Sky release date nears, we are seeing major leaks that spoil some of the game and streamers are showing off planets that don’t always match what gamer’s expected.

One of the most interesting issues discovered so far is that it is possible to go to the center of the galaxy faster than anticipated, in less than 30 hours. We show you where to look for more information, but don’t share any spoilers here.

There is a new No Man’s Sky patch that includes many changes to the game and the in-game universe. If you are getting the game for the first time tonight or tomorrow, you are good, but if you already played you may need to start over.

We’ll walk through the most important No Man’s Sky release date details including deals, where you can buy, pre-order bonuses and special editions.

We’ve added in No Man’s Sky pre-load details and multiplayer details as well as missions and a new video walking through No Man’s Sky features. We’ll also show you how to find the No Man’s Sky Limited Edition in stock.

Even though No Man’s Sky is an online game, you will not play directly with your friends, so you don’t need PlayStation Plus to play the game.

A new No Man’s Sky video shows off the first of the four main tasks you have in the game. Exploring, Fighting, Trading and Surviving on the 18 quintillion planets in the in-game universe.

In late July we see a new space combat No Man’s Sky video that shows off how you can fight in the sky throughout the game.

Another No Man’s Sky video shows us how trading works in the game so you get a bigger look at what to expect when you start playing.

The final No Man’s Sky release hype video is about survival. While you travel from planet to planet you need to stay alive. Deadly animals can pose a threat, but you also have to worry about radiation, heat, weather and acid rain in addition to sentinel drones and the need for oxygen.

In No Man’s Sky you explore space in, “an infinite procedurally generated galaxy.” That’s a fancy way of saying you are playing a science fiction game where you travel from planet to planet to explore new environments on planets and stars. 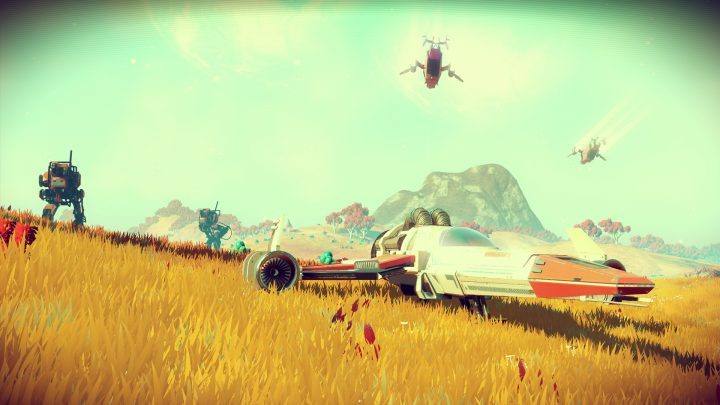 Everything you need to know about the No Man’s Sky release date.

During this exploration in your space ship you will be able to see species that no one has seen before. There will be artifacts on different planets that you can collect to help unlock the secrets of the universe. You can choose to share your discoveries or keep them a secret. As you travel across the universe you can leave a mark on planets that other players will discover.

There is more to No Man’s Sky than exploring planets. You face danger with each encounter. There are dogfights in space, but watch out your ship is not a strong one designed for long-term engagements. You will also go into a first person combat mode on the ground. The developer warns, “one mistake could see you lose everything. In No Man’s Sky, every victory and every defeat has lasting consequences.”