Black Friday is a great time to get a deal and save some money. However, every year we see a ton of cheap tablets or Android tablet Black Friday “deals” that aren’t worth buying. In this post, we’ll tell you what to look for, what to avoid, and why you probably shouldn’t buy a cheap tablet on Black Friday.

We’ve said it before and we’ll say it again. Avoid all those awful and inevitable $50 “Google Android OS” tablet deals. In 2017 Walmart had some for under $39, which sounds great, but it really isn’t. Before you go stand in line for a cheap tablet that will disappoint you when you get home, this is what you need to know. 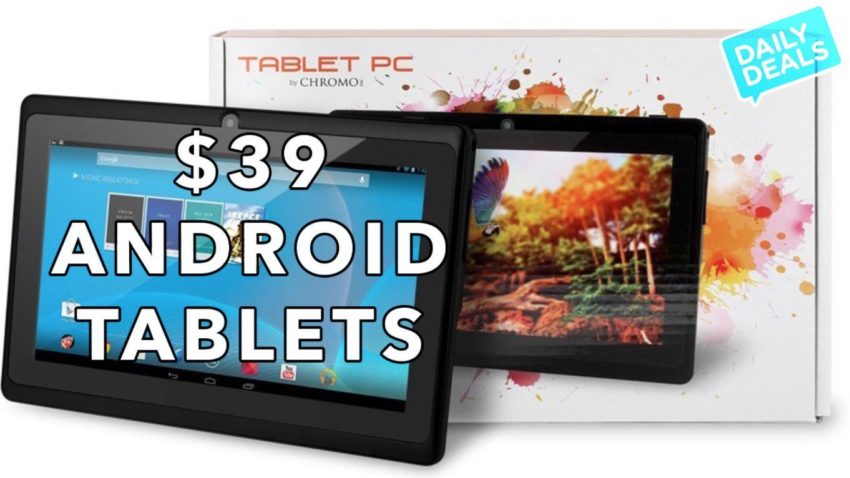 If I’m being honest, I’m not sure I’d recommend any Android tablet these days. Even Google ignores the tablet segment. Instead, buy a cheap Google Chromebook. They even run all the same Android apps.

If you think you’re saving $150 and getting a $200 tablet for $49 on Black Friday, it’s not worth the money. Depending on the model it probably never even cost $199. Whether you’re seeing deals at Target, Walmart, Walgreens, the corner store or online, here’s how to spot a deal you won’t enjoy.

If it sounds too good to be true, it probably is. You will not find a tablet for $50 that will deliver an enjoyable experience, let alone $28. Well, unless it’s one of Amazon’s Fire tablets. That’s about the only cheap Android tablet worth recommending.

There are a few buzzwords you want to look for and avoid at all costs. If the box says, “Google Android OS” it’s a tablet you don’t want. Look for and avoid “Google Tablet OS”, “Android 5.0”, “Google Tablet”, “Android Lollipop” or “Quad-Core Multi-touch tablet”. There are a few exceptions to this rule, but for the most part, none of those tablets are worth your hard-earned money.

There’s no such thing as a “Google Tablet OS” and any device running Android Lollipop is running software that got released in 2014. We’re currently on Android 9.0 Pie, in case you’re wondering. Need I say more?

Don’t fall for Android tablet bundle deals on Black Friday either. In an effort to sell you a terrible device, companies or retailers will bundle accessories together. If it comes with a folio case and Bluetooth keyboard, headphones, or a slew of different accessories, skip it. They’re trying to make up for the fact that the tablet is probably only worth $30.

Realistically, some of these ultra-cheap tablets might get the job done for your kids, but that’s about it. And we’re being generous.

Look for Brand Names You Recognize

Popular brands like Amazon, ASUS, Samsung, Lenovo, or LG all make pretty great tablets. Maybe buy one of theirs. If you find a tablet from a company you’ve never heard of before, skip it. Some don’t even have names and just list the specs and screen sizes. Don’t do it.

Here’s the problem. You’ll probably find an “RCA Quad-core Android OS tablet” at Walmart or Staples. RCA is a brand you recognize, and hey, it comes with a free case and Bluetooth keyboard. Remember what we said earlier? Look at that name, the old outdated software, and those cheap accessories they bundled on top. It’s not worth the price, and when you get home and try to use it you’ll realize it was a waste of money.

And finally, make sure any tablet you buy has the Google Play Store. You’d be surprised how many cheap tablets don’t have it, making them essentially a paperweight. Without the Play Store you can’t safely download apps or games. Again, the only exception to this rule is an Amazon Fire tablet.

In closing, we want to highlight a few more things for anyone considering a cheap tablet on Black Friday. For one, don’t buy anything extremely old. If the tablet came out 3-4 years ago, skip it. We see this a lot with older Samsung tablets. Then, if you have to Google the name, and you can’t find any reviews, don’t buy that one either.

And finally, don’t worry about missing out on Black Friday deals. If there’s nothing good, you always have Cyber Monday to get a cheap Android tablet. Again, it’ll probably be junk, but we’re just covering all the bases here.

Instead of buying a cheap tablet on Black Friday we recommend looking into a Chromebook. Most have touchscreens, have access to millions of Android apps, and just deliver a better overall experience.