The last few months have been really exciting in Pokémon GO. And with the release of gen 4 in October, you should probably start saving candy for all the evolves if you haven’t already. Here’s what you need to know, what gen 4 Pokémon are coming, and which candy you’ll need to stash.

This summer the game finally received trading, lucky Pokémon, and the mythical Celebi. Before that, the game developers added monthly community days where players can catch popular monsters and their shiny counterparts. Not to mention shiny Legendary Raids, MewTwo Raids, and Deoxys EX raids.

Now, Gen 4 creatures from the Sinnoh region are starting to appear in the game, but are slowly being released in stages. And while we’re still waiting for evolutions, they’re right around the corner. If you quit playing back in 2016 or 2017, you might want to try it again. Whether you just returned to PoGo or never left, here’s all the Pokémon here or coming in Gen 4, evolutions, and new babies you can hatch from eggs.

As expected, the Pokémon GO Gen 4 release kicked off in October, just like Gen 3 in 2017. However, Niantic only released a few starter monsters, like Chimchar, Turtwig, and Piplup then a few more during the Halloween event. There are still tons of creatures to catch and dozens of evolutions on the way.

So what’s next? Well, more Gen 4 will probably start appearing from November 1st, or on Monday, November 5th at 4PM ET/1PM PT. That’s the usual timeframe. Followed by the eventual release of the brand new Mythical Pokémon Meltan.

Thankfully, diehard Pokémon GO players on Reddit and popular sites like RankedBoost created the images below for your viewing pleasure. They tell you everything you need to know. From new evolutions of existing monsters, and all of the gen 4 babies you can hatch from eggs. Well, if you didn’t waste all your incubators on another worthless Alolan Meowth.

Some popular monsters like Rhydon, Murkrow, Roselia, Electabuzz, and Eevee all get an evolution with Gen 4. We could see Leafeon and Glaceon first, but we’ll have to wait and see. Most players were surprised to see Giratina as a raid boss for Halloween, but now we’re ready for Niantic to slowly release the rest of Gen 4 in November and December. As they do, you’ll want to have these candies ready. 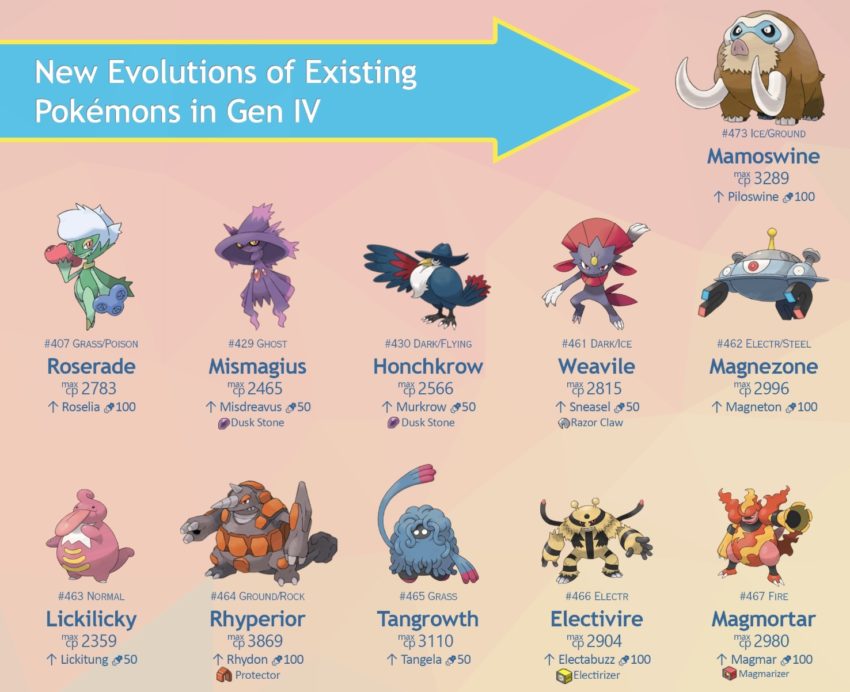 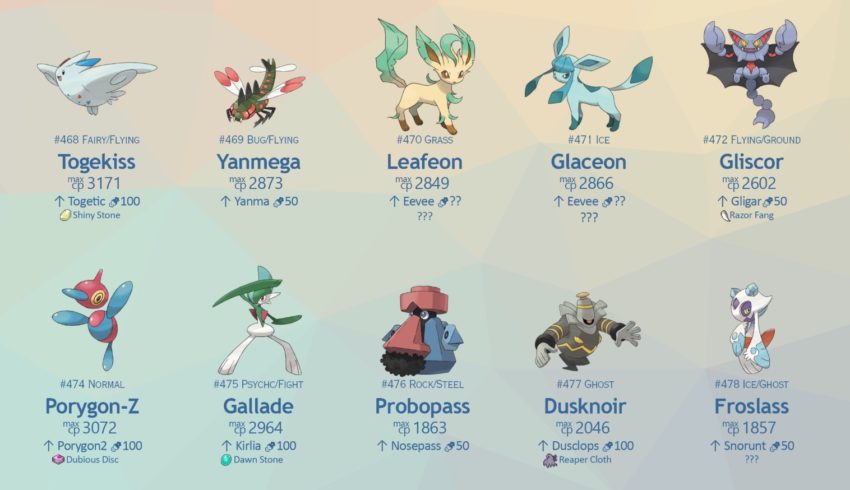 As you can see, some of these are very exciting. It’s worth noting that none of this is official yet, and some of this information is subject to change. Especially with the impending balance changes. We could see a few different monsters get released or left behind, and the candy count could vary too. That said, this information stems from earlier generations and matches everything else already within the game.

Read: How to Trade a Pokémon in Pokémon GO

Additionally, a lot of these evolutions require a Dusk Stone, Dawn Stone, Shiny Stone, Claws and other items before you’re able to complete the evolution. Items that aren’t in the game. And while we could see a few new items added to Pokémon GO, we’ll likely use the items readily available. Plus, we’re expecting some sort of Gen 4 evolution event to kickoff at some point too.

Not all the monsters get evolutions. Instead, some get baby variants you’ll be able to hatch from eggs. This round we’re getting a baby Snorlax, Mime Jr. and a few other fan-favorites.

I just want a Munchlax and I’ll be happy.

From what we’re seeing, Gen 4 only has around 107 monsters in it and will be closer to Gen 2 than anything else. At the same time, it has a lot more evolutions than Gen 2 so you’ll really want to save as much candy as possible. Plus, with the upcoming balance changes, we don’t recommend powering up anything just yet. Everything is going to change, and you’ll want to save as much candy and stardust for after those go into effect.

In closing, be prepared to save up over 1,100 candies to evolve 20+ different Pokémon and round out your Pokédex as soon as Niantic continues the generation 4 release. If you’re wondering what to evolve first, we recommend Rhyperior, Gallade, Leafeon, Mamoswine, and maybe even Electivire. Oh, and start getting excited for November Community Day featuring Cyndaquil.