Alto’s Odyssey is almost here. This is the sequel to Alto’s Adventure, which wrapped us up in hours, possibly days, of gameplay back in 2015. The creators are back with a new installment where you can take Alto through a new adventure as he sandboards through a new world filled with challenges and obstacles.

You don’t need to play Alto’s Adventure to appreciate and enjoy Alto’s Odyssey, but if you want to get a start on learning many fo the basic mechanics of the game you can try it out now. Here’s what you need to know about Alto’s Odyssey.

What is Alto’s Odyssey? 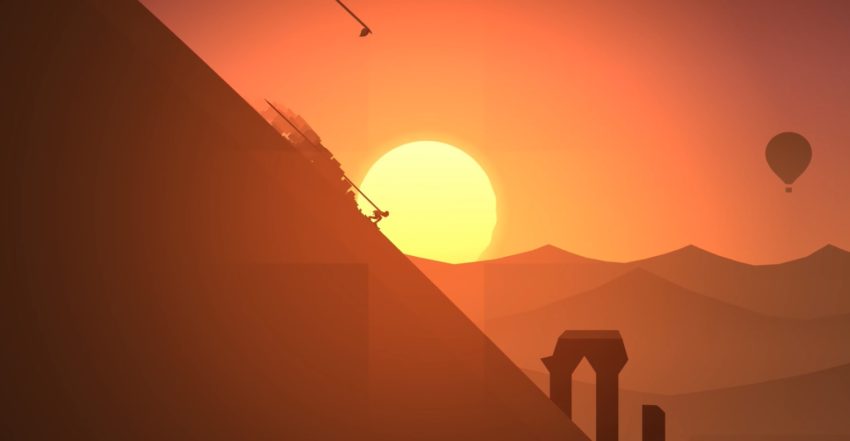 What you need to know about the Alto’s Odyssey app.

Alto’s Odyssey is an endless runner style game, but you sandboard instead of run. This time you are boarding through an endless desert filled with obstacles, hills, balloons, sandstorms, waterfalls and the occasional oasis. You’ll play in the desert, canyons and in ancient temples as you explore the world.

In the first game you collected llamas, now you interact with other animals including birds that will follow you around. You can unlock power ups as you play and collect coins to unlock new gear and players.

In addition to the main mode where you must go as far as you can without crashing, Zen mode is back allowing you to get up, dust yourself off and keep exploring.

This is not Alto’s Adventure 2. It is a companion to the game, not a sequel, so you can play it without playing the first.

The Alto’s Odyssey release date is February 22nd on iPhone, iPad and Apple TV. The game is available for pre-order now through iTunes, or you can buy it when the game arrives next week.

Alto’s Odyssey is $4.99 and there is no free version for the iPhone. You can watch a video of gameplay, but you cannot test the game out before you buy it. Here’s Alto’s Odyssey on the App Store. One purchase unlocks the game on your iPhone, iPad and the Apple TV.

When is the Alto’s Odyssey Android Release Date

There is no mention of an Android Alto’s Odyssey release date from the developer. Alto’s Adventure took a year to arrive on Android and it looks like we could be in for a slow roll again.

If you are an Android user who love’s Alto’s Adventure, you will need to stick with that game for the time being. Stay tuned to the developer on Twitter or Facebook for hints at an Alto’s Odyssey Android release date. Thankfully with Alto’s Adventure on Android this seems more like a matter of when, not if.

There are no Alto’s Odyssey in-app purchases on iPhone, iPad or the Apple TV. Instead, you pay $5 up front and you get the whole game. This allows you to play through all the modes and you can play over and over without ads interrupting you every 2 turns or needing to wait and spend real money to go on another run.

On Android, expect to see Alto’s Odyssey in app purchases and ads, which is simply how the Android platform works these days.

Is Alto’s Odyssey Safe For Kids?

Alto’s Odyssey is safe for kids to play. The endless runner style game is fun, and addictive without showing any ads or tempting players to buy coins and items in the game. Apple rates Alto’s Odyssey as 9+ for;

This is likely due to the crashes and other cartoon violence as you drop in on animals and potentially on other characters.