Earlier this year, Bethesda and Loot Crate teamed up to create a limited edition Fallout 4 Loot Crate. The crate went on sale in September ahead of the Fallout 4 release date and it quickly caused problems due to overwhelming demand.

Loot Crate’s servers were slammed with requests and many people saw their credit cards get charged for three, four, five Loot Crates. Fortunately, Loot Crate has excellent customer service and it handled all of the problems within a few days. 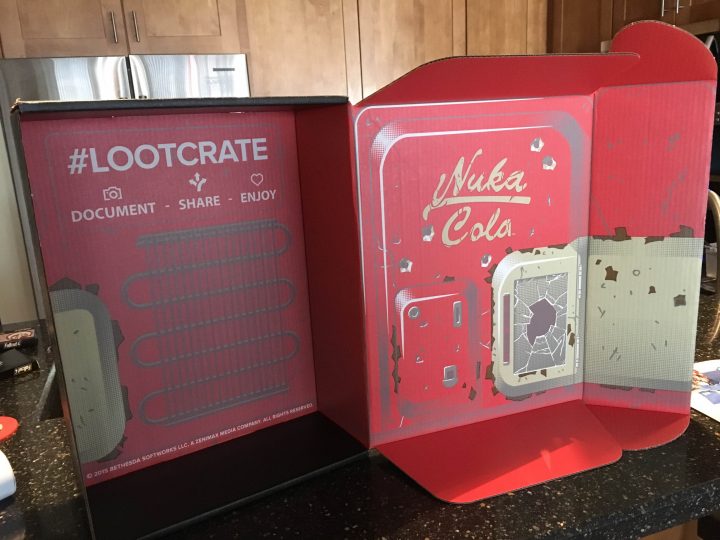 If you were fortunate enough to order a Fallout 4 Loot Crate during the rush, your order should be en route. Tracking information was sent out in late October and orders have started showing up on doorsteps today.

We’re in possession of Loot Crate’s Fallout 4 and we want to take a look at the crate’s contents. Loot Crate isn’t selling this any more but it’s available through sites like eBay.

Loot Crate’s Fallout 4 crate comes with an exclusive Vault 111 messenger bag that has enough space to store, say, a laptop so that you can play Fallout 4 for PC on-the-go. It doesn’t have enough room to carry an Xbox One/PS4 and a TV though. 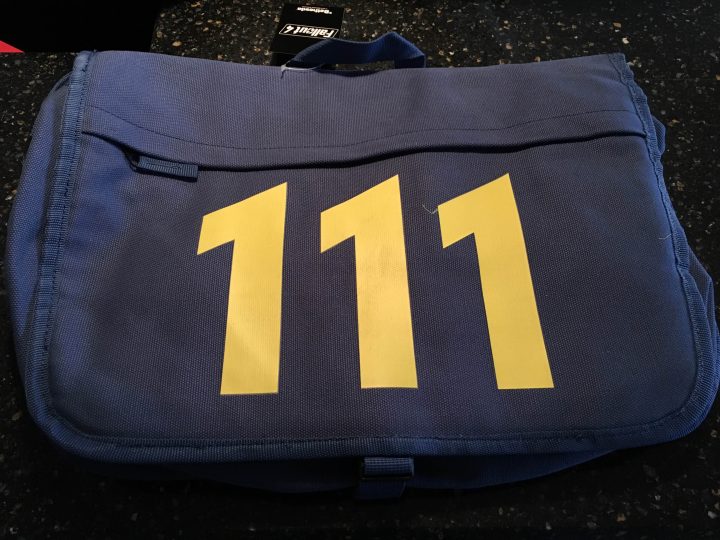 It features one main pocket, a shoulder strap, and an outer pocket that can be zipped up. Some of you might use it for your work, others might use it to store video games and other Fallout-related items.

The Crate features an exclusive Fallout 4 collector pin set that comes with four pins that you can put on a cork board, a bag, or your clothing. (Or something else, you’re not limited.) 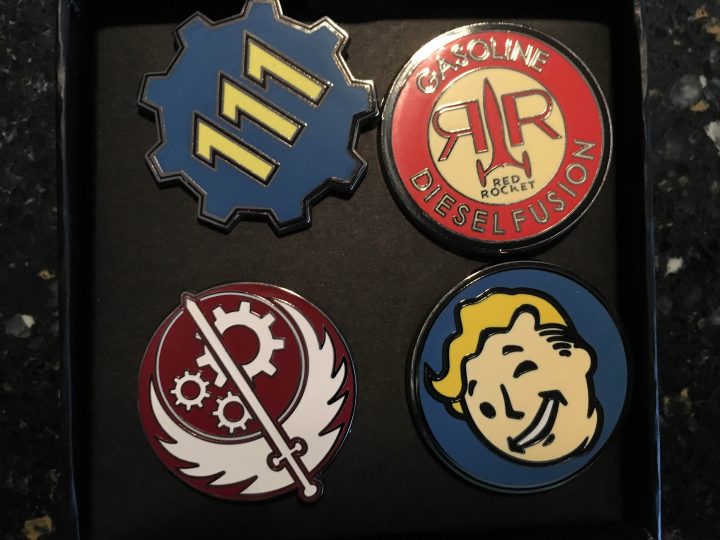 The pins include a Brotherhood of Steel logo, Red Rocket logo, a photo of the Vault Boy, and the logo for Vault 111.

Tucked away inside the Fallout 4 Loot Crate is a limited edition Brotherhood of Steel flag that will be perfect for finding people at concerts, barbecues or a flag holder on a balcony. (I didn’t have time to set it up yet so you’ll have to deal with it sitting on the floor.) 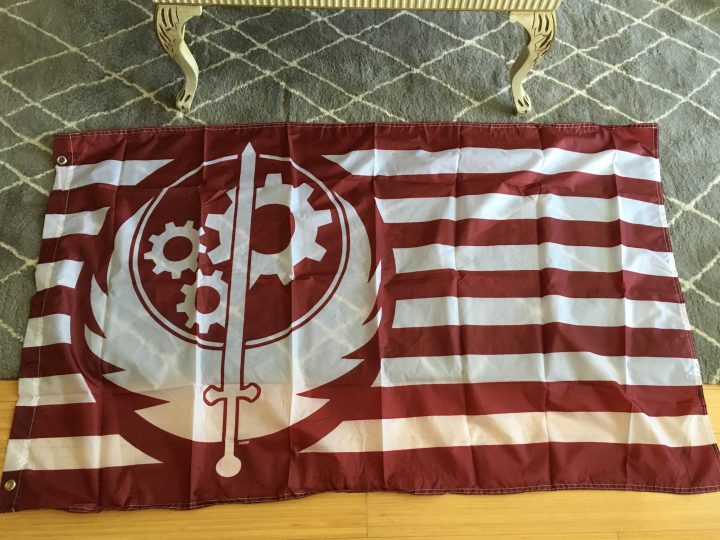 If you’re not familiar with the Brotherhood of Steel, it’s one of the prominent factions in the Fallout series and it will play a role in Fallout 4’s plot. 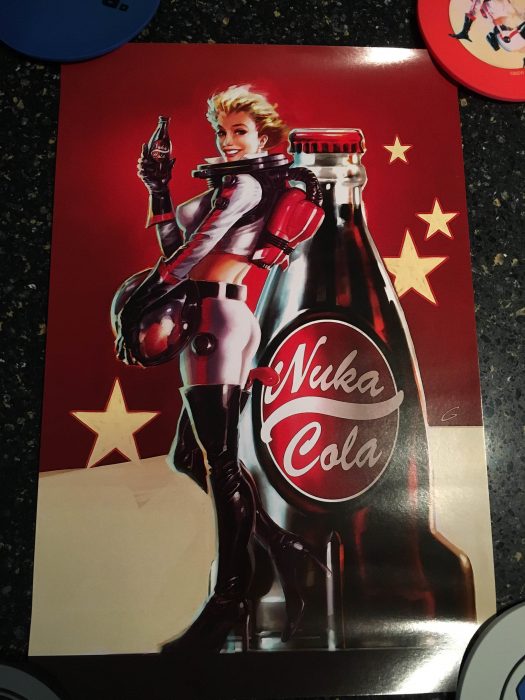 One is an ad for Nuka Cola. If you’re not familiar with Nuka Cola, you can read all about it right here. It actually has an interesting history. 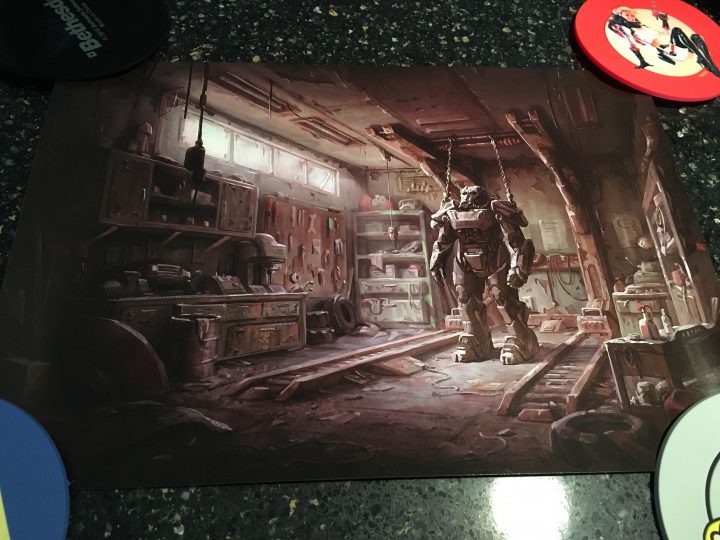 The other poster shows off Fallout’s Power Armor.

This is not an exclusive item but it’s a nice addition nonetheless. 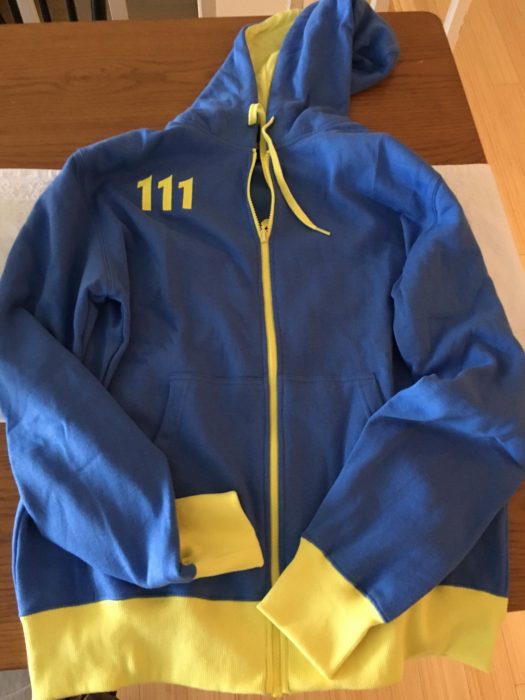 The Fallout 4 Loot Crate comes with a sweatshirt (hopefully you picked the right size) that features Vault 111’s logo on the back. 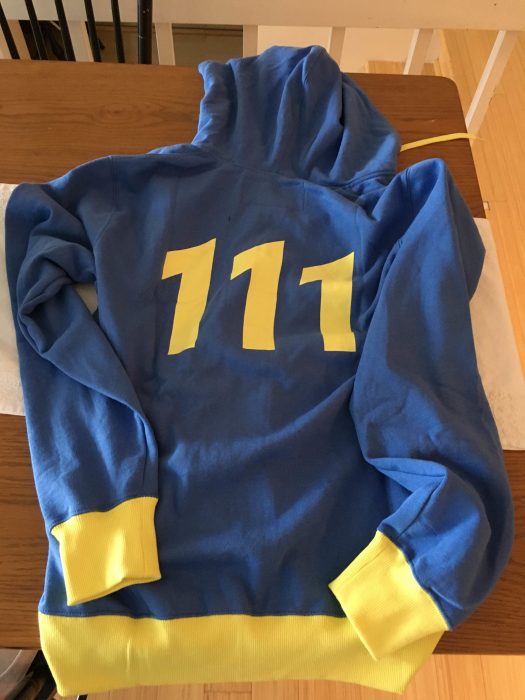 The clothing stays within Fallout’s color scheme and it’ll come in handy on late nights when it’s cold and you’re trying to beat one more mission before going to bed. 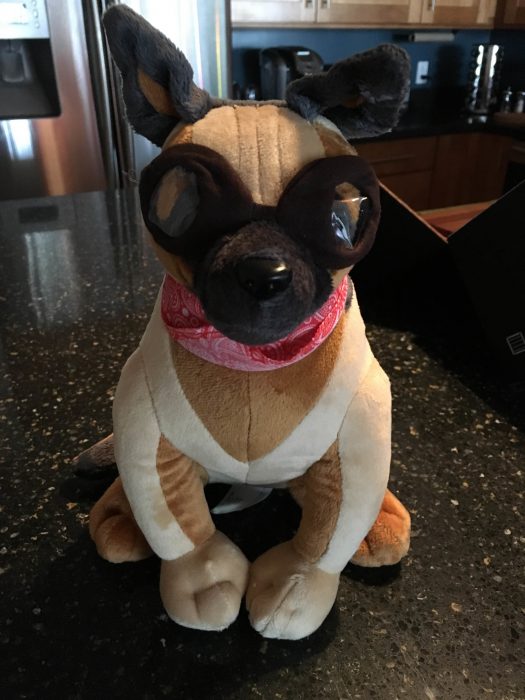 The crate comes with a nice Dogmeat plush toy that’s perfect for your collection, children, or god forbid, your own dog.

And finally, it comes with an exclusive coaster set. 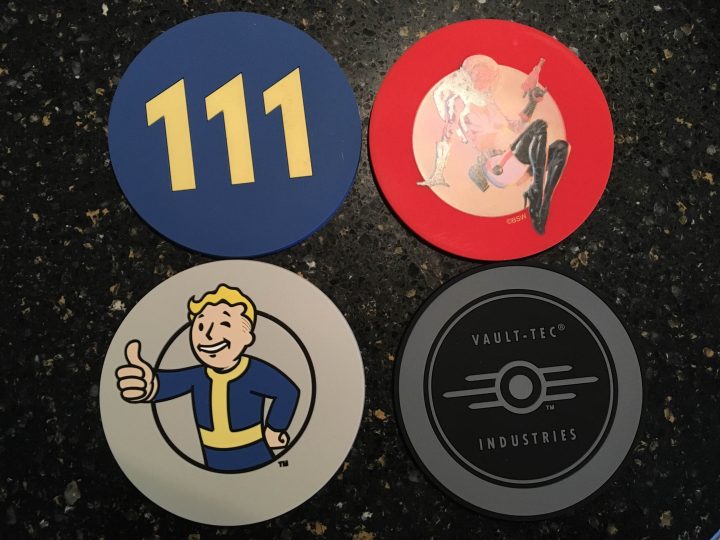 It comes with four coasters that are made of rubber (or rubber-like material). These are going to be perfect for your Nuka Cola or your Fallout Beer.