How to Check If Your Apps Will Work with iOS 11

Most of the apps on your iPhone or iPad should continue to work when you download Apple’s iOS 11 update but there’s a chance some won’t.

Next week, Apple will pull the iOS 11 update out of beta and release it to the general public. The iOS 11 release date is confirmed for September 19th and we expect the update to start rolling out in and around 10AM Pacific time.

The release of iOS 11 will also bring an end to iOS support for 32-bit applications. Once iOS 11 arrives, apps that haven’t been updated to support 64-bit will no longer work. Thousands of iOS applications are reportedly on the chopping block including several popular games.

In the buildup to the iOS 11 release it’s a good idea to check which apps will work with Apple’s new update and which ones won’t. It will only take you a few seconds and it’ll help get you and your device ready for the transition to the new operating system 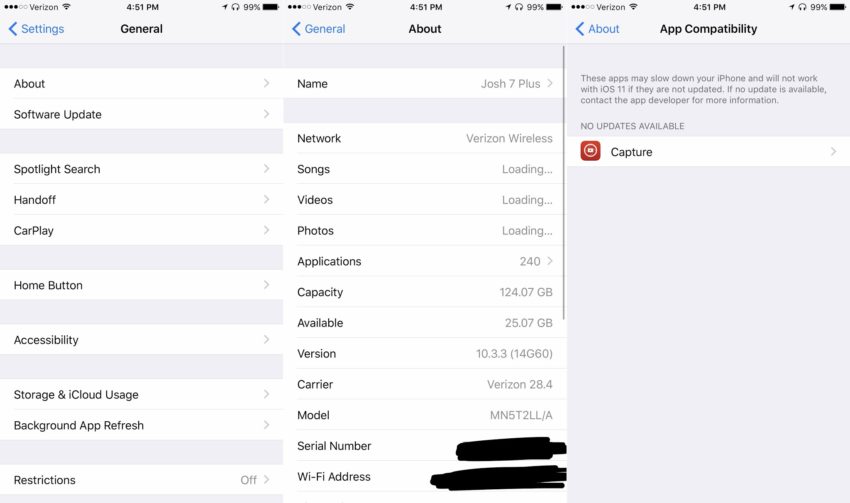 Make sure you check your apps before the iOS 11 release date.

How to Check If Apps Will Work with iOS 11

In order to check the apps on your iPhone or iPad you’ll want to open your Settings app. From there, tap on General, About, and then tap Applications.

There you should see a list (or maybe not, depending on what’s on your device) of applications. Examples include Flappy Bird (yes we still have it on a phone) and the YouTube Capture app.

If you see an app listed here it means that it won’t work on your device once you make the transition from your current version of iOS to iOS 11.

If you don’t see any apps listed on this screen your apps aren’t in any danger. They should function as normal once you download Apple’s new operating system.

If one of your favorite apps or games is listed here there’s no much you can do. It’s on developers to update their apps to support 64-bit and iOS 11.

Those of you who want to continue to using a 32-bit app will need to stay put on iOS 10 and/or plead with the developer to update the app.