Believe it or not, there are actually a couple of different ways to capture a screenshot on an iPhone 13, iPhone 13 mini, iPhone 13 Pro, and iPhone 13 Pro Max.

The easiest method involves holding down two buttons, but there are also ways to take a snapshot without having to press any buttons.

If you’re new to the iPhone or you’ve got big clumsy hands, it might take you a bit to get comfortable with the process. That said, once you get your muscle memory trained, it shouldn’t be a problem moving forward.

How to Take a Screenshot on iPhone 13

How to Take a Screenshot with Buttons

If you’ve done this correctly, you’ll hear a shutter sound (unless you have your phone silenced) and you’ll notice a thumbnail of the photo popup in the left side of the display.

If you ignore the thumbnail, it will disappear after a couple of seconds and the screenshot will then head to your Library in the Photos app.

You can also tap on the thumbnail which will bring you to a preview where you can edit the screenshot or delete it. We’ll cover that in more detail further down in the guide.

How to Take a Screenshot Without Buttons

You can also take a screenshot on your iPhone 13 without having to hold down buttons. Here’s how to do that.

First, head into your Settings app. From there, go to Accessibility. Now, head on into the Touch section. Scroll down until you find Back Tap. Using this feature lets you use a double tap or triple tap on the back of your iPhone to perform certain actions like taking a screenshot.

Choose Double Tap or Triple Tap and then scroll down to Screenshot. Tap on it and you can now double or triple tap the back of your phone to take a screenshot. 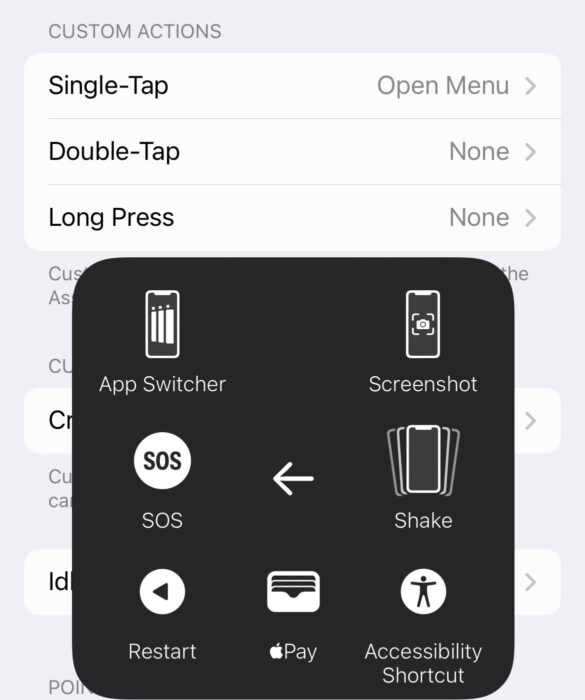 You can also use your iPhone’s AssistiveTouch feature to take a screenshot. Head into your Settings app, go to Accessibility, and head into the Touch section. Toggle AssistiveTouch on. Once you do that, you’ll see a circular button appear on the right side of the display.

Now, head down to the Custom Actions section and you’ll see Single-Tap, Double-Tap, and Long Press. You’ll now want to assign Screenshot to one of these sections. Once that’s done, you’ll use the gesture you selected on the circular AssistiveTouch button to take a screenshot.

You can also tap the AssistiveTouch button, tap Device in the next menu, tap More, and then tap Screenshot to take a screenshot.

How to Edit a Screenshot on iPhone 13

Again, after you take a screenshot you’ll see a thumbnail appear in the bottom left-hand corner of the display. If you tap it, you’ll be brought to a new menu that allows you to quickly edit the screenshot or, if you’re unhappy with the shot, delete it.

This new screen lets you crop the screenshot, annotate it, or rotate it. When you’re done, you’ll want to tap Done in the top left corner of the screen and your screenshot will save to your Library with the edits you’ve made.

If you want to delete the screenshot, simply tap on the Trash Can icon in the top right corner of the screen and then tap Delete Screenshot in the next menu.

If you need to do additional editing, simply head into your Photos app and find the screenshot in your Library.