College football is back and that means the quest to reach the CFB playoffs and win a championship has begun. If you cut the cord and canceled cable, or want to, you don’t have to miss out on sports. If you’re asking yourself, “how can I watch college football without cable?” we’re here to help.

We’ll show you how to enjoy the 2019-20 NCAA college football season from multiple services. In fact, these days its easier than ever before to tune-in, even if you are a cord-cutter like myself.

You have a variety of streaming services and apps that will let you watch college football in 2019. Whether that’s your living room, or on the go with a phone. A few of these options even let you watch games from a web browser, that way you can watch at work from your computer. Here’s how to get started and what you need to know. 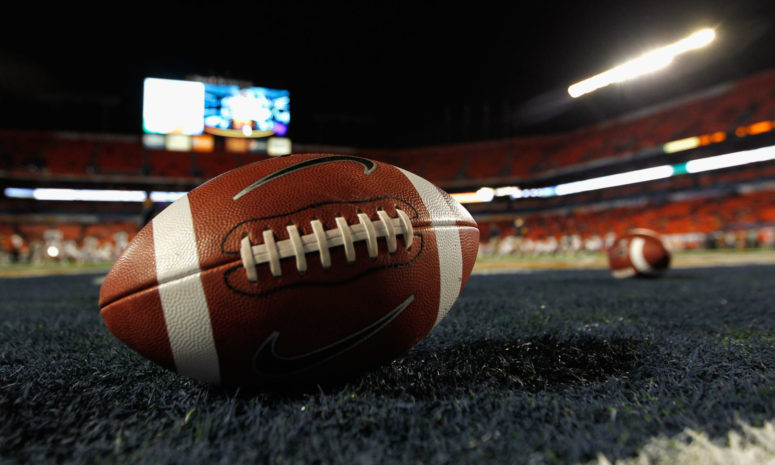 How to Watch College Football Without Cable in 2019

Now before we begin talking about each one of these methods, we want to mention TV channels and networks first, as that’s extremely important. Where you live and what you want to watch will be a determining factor here.

For starters, the ESPN family of networks and channels is by and large the most important, as they play the most college games. We’re talking about ESPN, ESPN 2 and ESPN 3. Then, you’ll want access to ABC, NBC, CBS, FOX, and then move down to things like the SEC Network and ACC Network. Not to mention BTN, Pac-12, Mountain West TV, etc. Where you live and which team you want to follow will play a factor in which service you choose.

Now that we have that out of the way, here are your option for the best way to watch college football without cable.

My personal favorite is Sling TV from Dish, which is live TV streaming over the internet, and they offer a ton of football. Sling TV can completely replace your cable bill and it’s only $25 a month with no contracts or $40 for both Sling Blue or Sling Orange and all the channels. Plus, you can sign into ESPN apps with Sling TV, unlike the others, and catch NCAA Football on the go too.

In fact, Sling TV is one of the best for sports because they have all the ESPN channels, NFL Network, RedZone, Fox Sports, FS1, FS2, ACC, local Fox, NBC and much more. The base package has over 40+ premium channels for $25. Then, Sling offers DVR recording, multi-user streaming and more. There’s a small chance they’ll lose Fox channels in 2019 over negotiations, but we’ll have to wait and see.

Additionally, Sling TV works almost anywhere and everywhere. Whether that’s on your TV, or by signing in on your phone, laptop, tablet, computer or even a web browser. It’s literally the most versatile way to watch TV on the market. It also works with streaming boxes, Amazon Firestick or TV, Roku, Xbox, PS4, Apple TV and more. Try it free for 7 days.

Perhaps the easiest way to watch TV and NCAA football games without cable is by using an Antenna. Whether that’s an old-school set of bunny ears or a new HDTV Antenna, they both work. With an OTA antenna, you can watch games on ABC, NBC, CBS, and FOX all in 1080p HD. Yes, these days you’ll get these channels in HD, even from an antenna.

Last year I went with a TiVo BOLT and a newer HDTV Antenna from Amazon. And while the BOLT isn’t required, you’ll get a better experience. An antenna will pick up local games and a bunch of other channels. In some instances, the Antenna had better picture quality than cable. Not to mention the BOLT offers DVR recording and apps like Netflix, Hulu, YouTube and more built-in. So you can use it for more than just football.

Keep in mind that some of the biggest and most important prime-time games will air on ABC or Fox this year. Games that will determine who’s in and who’s out for the playoffs. And you can watch these 100% free in HD with your antenna. You’re welcome.

Similar to Sling TV, Playstation Vue is live TV streaming online and they have four different plans you can choose from. All of which offer a decent amount of football. PS Vue has a base lineup of popular channels starting at $49.99 and there is no contracts. 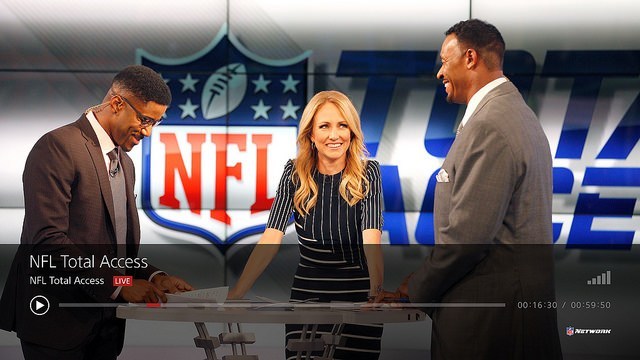 If you haven’t tried Hulu or Hulu with Live TV in a few years, it’s seriously an excellent option here in 2019 or 2020, and one of the best cable tv alternatives. Furthermore, Hulu is quite possibly the easiest, best, and most complete way to watch college football after you cut the cord. 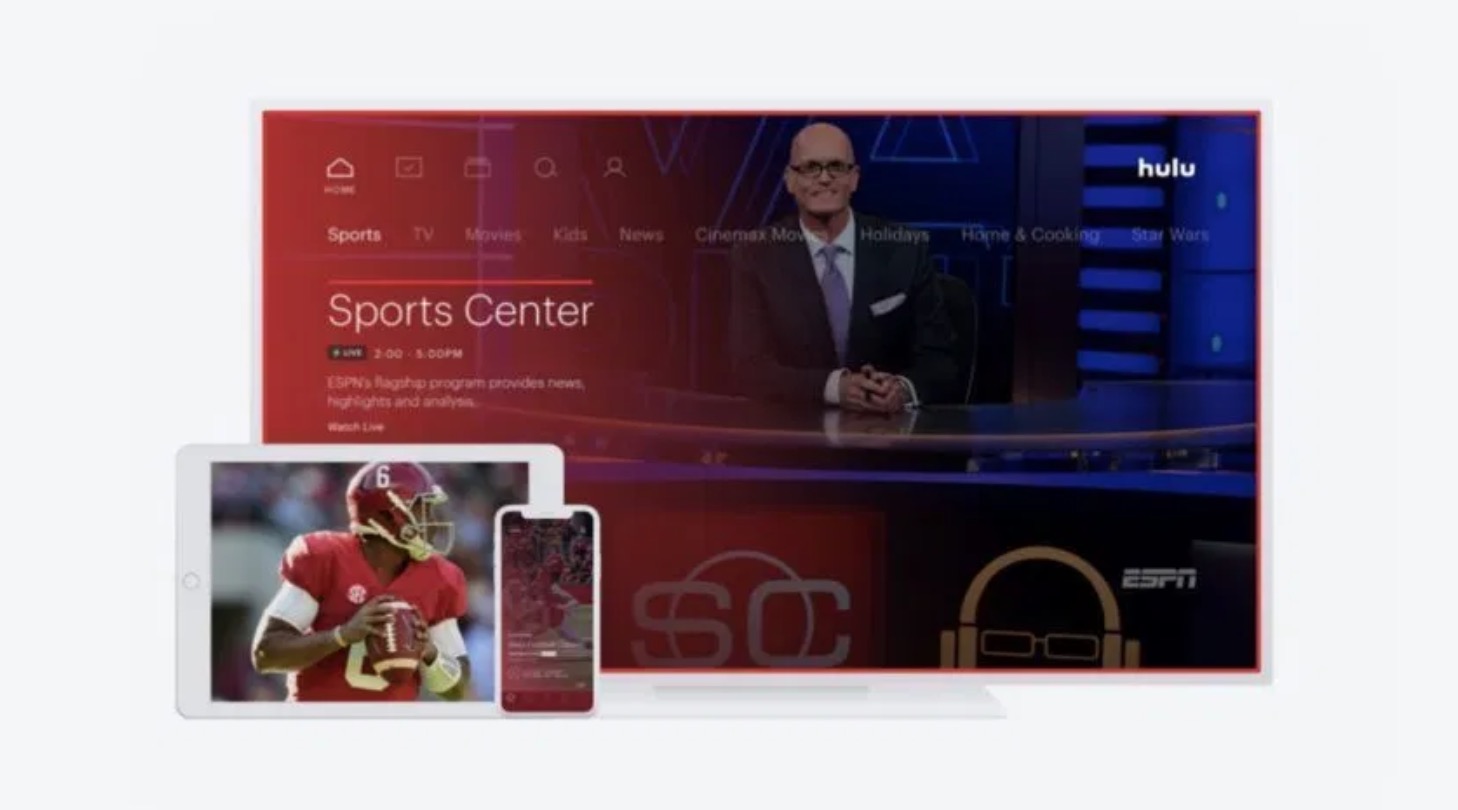 Here’s the thing. While Hulu Live is $45 a month, that’s the only plan. There are no add-ons or confusing packages. That base fee gives you the entire ESPN family of networks, including ESPN Goal Line and ESPN College Extra. Not to mention NBC, FOX, CBS, ABC, Big 10, and SEC, to name a few.

Hulu still has a huge library of content, tons of live TV channels, and almost all the local and national college football you could ask for. Sign up today.

Next up is Google’s TV streaming service, YouTube TV. It works essentially the same as PS Vue or Sling TV and is perfect for football fans.

For $49 a month you’ll get access to everything on YouTube, live TV, sports, on-demand video, DVR features, 70+ channels and more. YouTube TV has access to most of the important channels and networks for college football, not to mention most NFL too. 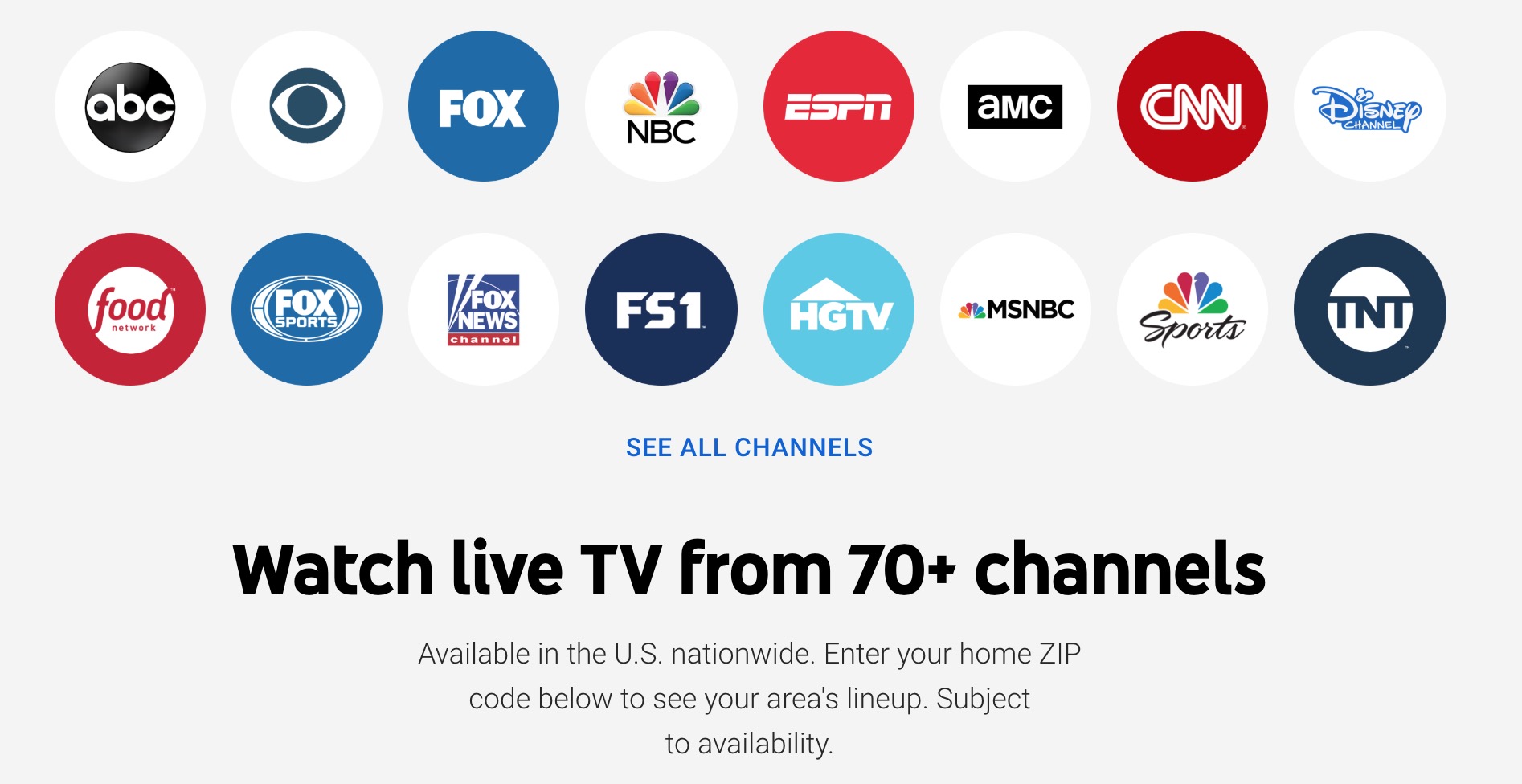 The only problem with YouTube TV is that you might run into regional restrictions while trying to watch games on ABC, etc, and some regional affiliates are missing too. All the FS channels will give you plenty of NCAA College Football, so that’s a plus. Try it for free today, and find out if you’re eligible by clicking here.

We didn’t want this entire guide to be about streaming services, but that’s about your only option if you cancel cable. Similar to Sling and YouTube TV, FuboTV is a popular streaming service “built for sports” that you’ll want to consider. Then, AT&T has its own streaming service known as AT&T TV Now. We want to talk about FuboTV though. Just look at that list below! 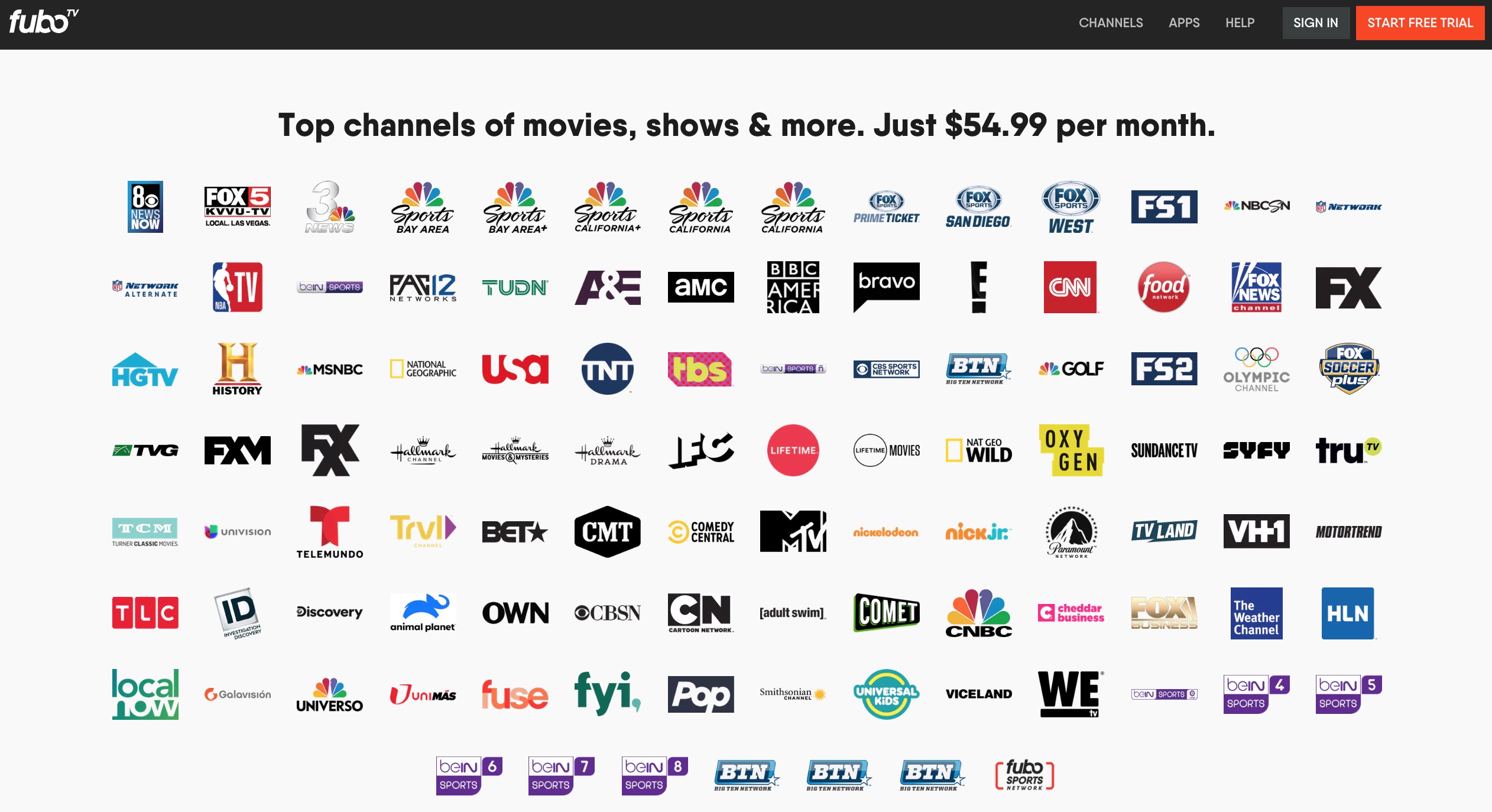 On FuboTV the main plan is $55 a month and gives you nearly any and all college football with one big exception. FuboTV does not offer any ESPN channels. That’s the only downside to this otherwise solid cable TV alternative. Fubo has basketball, football, NFL games, and much more. Plus, for $9 extra you can add-on the Sports pack with regions like PAC-12 Network, FOX College Sports, Stadium 1, 2, 3, and a lot of other college football channels.

You can also look into AT&T TV Now, which is just a renamed DirecTV Now, and while you’ll get access to most games it does cost $70 a month and you might as well pay for cable.

Last but not least we want to talk about two smaller services that will help you enjoy the season. Those being ESPN+ and College Sports Live, from CBS. These are add-ons you’ll want to consider on top of something like Sling TV for extra content.

College Sports Live is a streaming service that shows you any and all college sports from 50+ schools across the nation. So, if you follow a smaller school that’s not always on national TV, you might be able to find them from CSL. And it’s only $10 a month. However, they only air non-televised events. So if your team rarely gets televised, you’ll be in luck, but if they’re playing on ESPN you can’t stream the game with the College Sports Live service.

Then, if you’re on a budget try ESPN+ which comes from ESPN themselves. And while it’s nothing like all the services on this list you can get a ton of content all for only $4.99 a month. You get access to games and tons of exclusive ESPN+ only content (like that Peyton’s Places show) for one small fee. It works on phones, tablets, laptops and several other areas. It’s not an all-out service, just an affordable add-on option, so keep that in mind.

In closing, we want to share our opinion on your two best options to watch college football live and without cable. Those being Sling TV or Hulu Live. Both services have pros and cons, and might appeal to different people. If you love a lot of TV shows and original programming, Hulu has plenty of that on top of football.

If you’re looking for a complete cable alternative that just so happens to be an excellent way to watch college football at the same time, Sling TV is your best bet. You can’t go wrong with either option, so look at the channel lineups and choose what’s best for you. Before you go, here’s our cord-cutting guide, and a few things you’ll want to consider or think about before you actually cancel cable.