You don’t need cable, or to go to a bar to watch the Mayweather vs McGregor fight this weekend. You will need a good internet connection, a decent amount of cash and probably a few friends to chip in. If you really want, you can even watch this on your iPhone or Android, but we think you’ll want to tune into the big screen.

Forget Cable Pay Per View and go to one of these online services that allow you to legally watch the Mayweather vs McGregor without cable or satellite. If you don’t want to do this you should start checking for a local bar that is playing the fight.

Don’t plan on watching the Mayweather vs McGregor fight on Kodi, especially legally. Every time there is a major fight like this we see illegal live streams pop up, but you Showtime is ferocious about shutting them down.

We wouldn’t be surprised if there is a Mayweather vs McGregor facebook live stream from someone pointing a camera at their TV.  Facebook doesn’t care much about people stealing other people’s original content, but they are very fast to respond to major companies and to any music in videos, so there’s a good chance these will be shut down quickly as well.

How to Watch Mayweather vs McGregor Live Without Cable 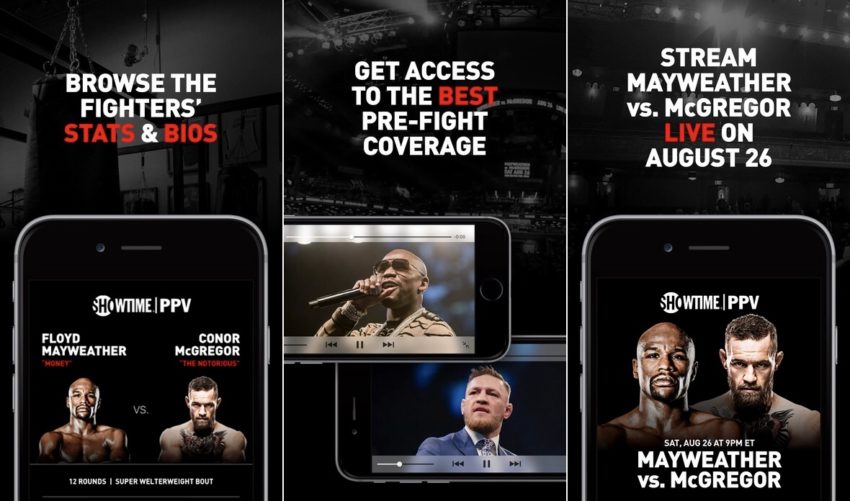 How to Watch Mayweather McGregor live without cable.

Showtime is in charge of broadcasting this fight, so you will need to use a service that offers Showtime and will have the fight. The Mayweather vs McGregor fight is Saturday August 26th at 9 PM Eastern, 6 PM Pacific.

There are five ways you can watch the Mayweather vs McGregor fight without cable. This works on the PS4, on your computer, On the Apple TV, iPad, iPhone, Roku, Fire TV, Xbox One and on devices that support Sling TV.

You will need to pay for the Mayweather vs McGregor fight, but you can choose where you pay and where you watch. These options don’t require any long term commitment and other than a Sling TV subscription you don’t have to worry about any added fees.

These options all promise a live stream of the McGregor vs Mayweather fight on your TV, iPhone, iPad or Android and work with a wide range of devices. You will need a good internet connection and there is always a chance that you will see some streaming problems.

There is a good chance you may run into Mayweather vs McGregor streaming problems with the UFC, ShowTime PPV app, Sling TV app PSN or other services due to the overwhelming demand to watch.

You should tune in well ahead of the match and make sure you can stream the fight. You need to be on tvOS 10 or higher or iOS 9 or higher on Apple devices to watch. If you aren’t you should update now.

Be warned that there are often complaints about the PSN Live Events viewer crashing during UFC events, so you may want to be cautious if you go that route an make sure your PS4 is up to date.

If you run into any other issues, you may need to restart your device or console, or turn internet connectivity off and back on to get things going. Showtime suggests contacting the service you purchased the fight from, not contacting Showtime directly.