Apple boasted that the glass on the new iPhone 11 is the “toughest ever in a smartphone,” during the announcement in September 2019, but we’re seeing reports of iPhone 11 models easily scratching. The reports started the first week of the release and continue as 2020 moves into full swing.

The growing number of complaints on the Apple Discussion Forums are approaching the level where some users are questioning if this is a manufacturing issue. If enough complaints arise, Apple may have a ScratchGate on its hands.

After asking readers, we’ve compiled a list of complaints, images of scratched iPhones and video of the iPhone 11 and iPhone 11 scratch problems. This is not limited to early models, but it is also not happening to every model out there.

There are enough reports that it’s worth highlighting the issue that a growing number of users are facing. You can decide from there if you need an iPhone 11 screen protector, AppleCare+ or simply a good case.

Apple’s custom glass is made by Corning and in several drop tests it performs admirably even with a drop on concrete, but we’re hearing from friends and online reports of the iPhone 11 screen scratching easily. 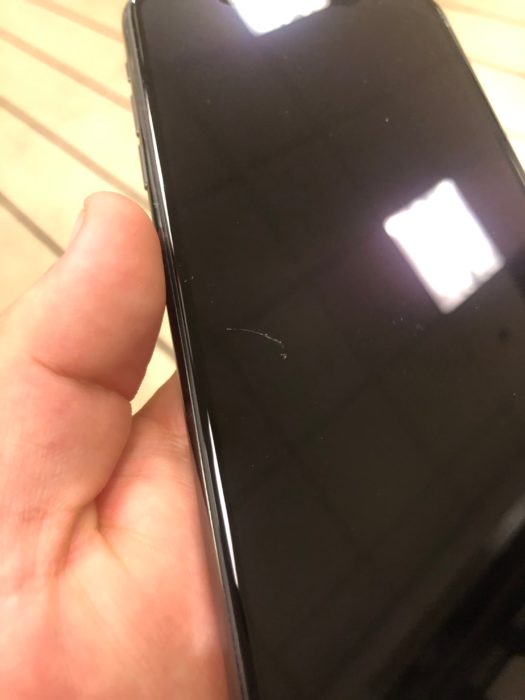 An iPhone 11 scratch shared by cperdue on the Apple Discussion Forums.

On the Apple Discussion Forums, many owners are sharing iPhone 11 scratch complaints and photos of the damage. User cperdue complains and shares a photo of the damage,

“I have a legit crack/scratch in my screen that showed up out of nowhere. No drop, no incident… but I can feel it with my nail, but its not a crack in the sense that it’s emanated out or any spider webs. Just a small line-chunk out of the front facing glass, along with a separate small chunk missing a few millimeters away. Truly almost seems like a defect in the manufacturing to have appeared after 24 hours of use without incident.”

Other users report that the iPhone screen scratches easily in a pocket with nothing else. User zero-or-one writes, “My iPhone 11 looks worse after 1 week than my iPhone 7 did after 3 years.”

Readers share with us additional reports, that we are highlighting below;

@Apple so my tweet was taken down but, here is my brand new iPhone 11 with just a week of use, only in pockets. So many scratches! @Josh_Smith pic.twitter.com/58cRuVilTF

@Josh_Smith I’ve been babying the iPhone 11 pro max because I wasn’t sure I was going to keep it. I’ve had it two days and I have small scratches all over the screen. Super frustrating.

Read, lil lil, writes, “I recently got the iPhone 11 Pro Max and literally the day after I have found scratches around the entire screen. Some are barely noticeable but some are deep. I have not dropped it and only reason I can think of is my pockets. Seems like the whole tough screen thing is a scam. ” 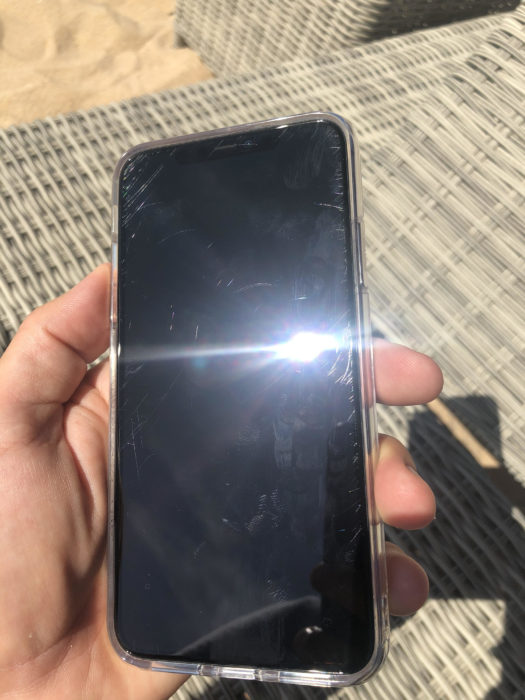 Reader Krido shares an image of iPhone 11 Pro Max scratches after one day of “normal use,” which is terrifying to look at. Reader Alam writes, “It’s been only two days with the iPhone 11 and I got four small scratches out of nowhere.” Another reader shares, “my wife’s iPhone 11 Pro max just got a scratch. She’s never had any issues with her previous iPhone getting scratched in her purse. It does seem the new iPhone scratches easily.” 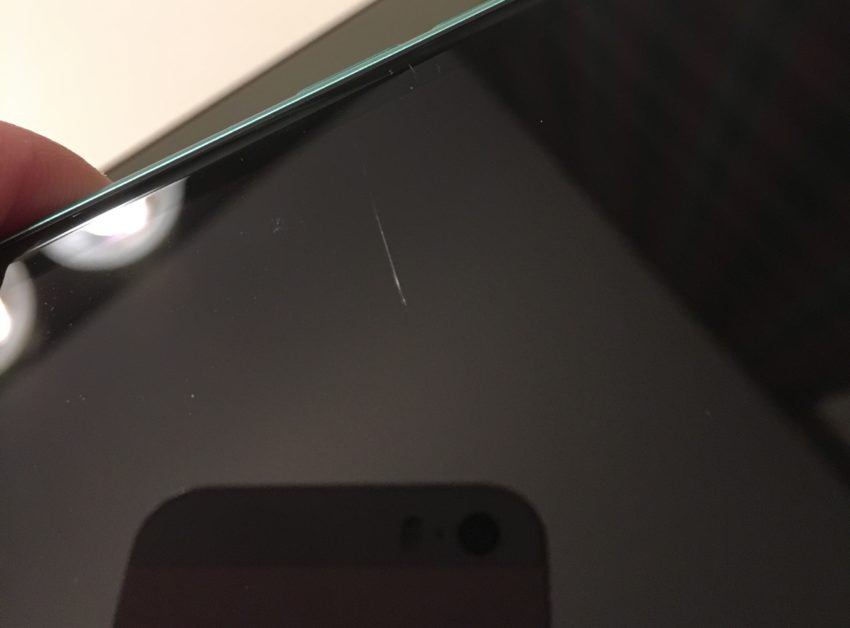 Libby shares a photo of her iPhone 11 and regret upgrading from the iPhone SE, “‘m forwarding a picture of my 1 week old iPhone 11. Picture taken by my 3 year old unscratched iPhone SE, which has never been placed in an iPhone case or protector. This was the first time in my life I bought a current iPhone model and regret the decision.”

Another reader, Timothy, shares his frustration after being told by an employee that he wouldn’t need a screen protector since he had AppleCare+. He writes,”I purchased my iPhone 11 from Apple along with AppleCare+, and the employee suggested I wouldn’t need a screen protector since a screen replacement with AppleCare is only $30. Low and behold, less than a day later, the front screen of my iPhone 11 has multiple scratches already, some were surface level but there were one or two that were deep enough to feel. I never dropped it at all and I’ve only put it in my pocket and on a clean table but somehow it still managed to scratch. Obviously I was frustrated and went to go get a screen protector right away, but the deeper scratches were still visible under the screen protector.” 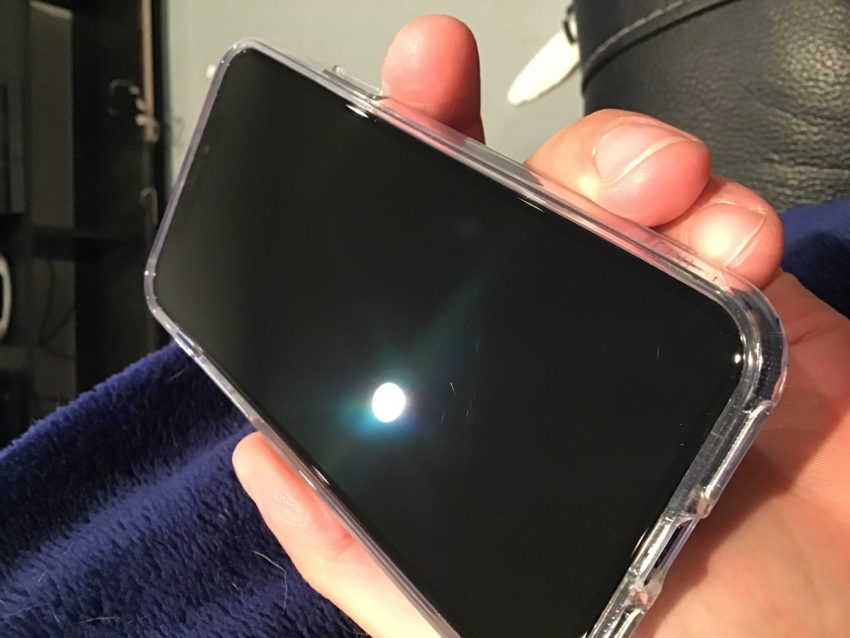 Rounding out our reader complaints is Coltan, who says that he tried calling Apple, but they told him that the company hasn’t heard many people talking about it. He writes, “Just read your article, just thought I’d throw in my hat too, I was treating this phone very carefully because I was waiting for my screen protector to come in, dropped it once onto a piece of plastic, and scratched it, and I’ve been trying to rub out the scratches with a microfiber cloth and have just been scratching it more, not the greatest picture, but hopefully, you can see.

If you watch the Jerry Rig Everything iPhone 11 scratch test videos for the iPhone 11 and iPhone 11 Pro Max you can see that the phone holds up very well when subjected to many potential scratches.

This suggests that the iPhone 11 and iPhone 11 Pro screens are strong, but also that there may be some type of manufacturing issue

There is a precedent for Apple dealing with screen and display issues, especially early in the production cycle.

What to Do If Your iPhone 11 Scratches Easily?

For users dealing with iPhone 11 scratches, you can try talking to a local Apple Store to see if they can help you. Many times they will say that this is a cosmetic issue and not covered under AppleCare+ or warranty, but you might get lucky.

Some users found that putting a screen protector on the iPhone 11 helped hide some of the scratches. While not recommended, if you do break the display with AppleCare+, you can get a new screen for $29.

If your iPhone 11 or iPhone 11 Pro screen is scratched send your information to us at [email protected] or to @Josh_Smith on Twitter so we can gather more information.

Here’s a look at the other iPhone 11 problems to learn about other issues facing users.