There is no need to pre-order Madden 16 to pick it up on release day, unless you want a special edition, but if you do pre-order you’ll get special bonus items to outfit your Madden Ultimate Team. There are also a few deals that can help you save $10 or more when you pre-order Madden.

This guide will walk you through what you need to know about the Madden 16 release date, what’s new in Madden 16, the best teams and highest ranked Madden 16 players.

The Madden 16 release date is August 25th on disk and digital. While there are reasons to pre-order Madden 16 you will be able to walk into any store that sells video games and buy the new Madden on release day. 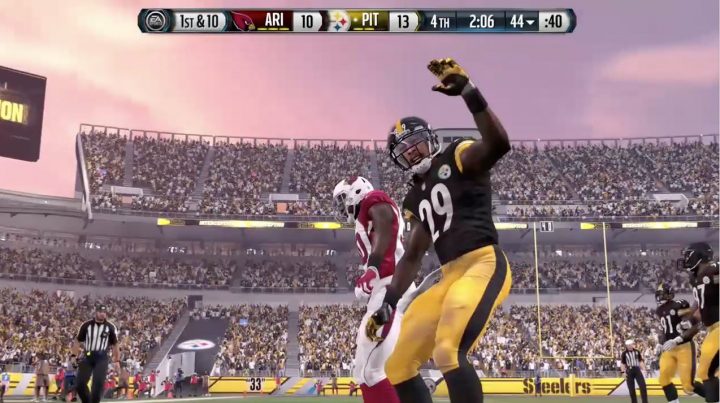 Everything you need to know about the Madden 16 release date.

If you pre-order Madden 16 you get free Madden Ultimate Team packages and if you buy it at GameStop you also get a $15 Live Nation voucher.

You can pre-order Madden 16 online at Amazon, Best Buy or GameStop and can choose in-store pickup from the latter two companies.

Last year EA still allowed users on Xbox 360 and PS3 to play the new Madden early, but this is no longer an option.

If you own an Xbox One you can play Madden 16 early with EA Access. This is a subscription service that includes early access to trials of new EA games like Madden 16 and FIFA 16 as well as a vault of a dozen older EA games.

All these games are the full version. The Madden 16 trial is limited to 10 hours, but the older games like Titanfall and Battlefield come with no limits.

If you don’t have a Xbox One, you can walk into a GameStop and play the game early at any location. 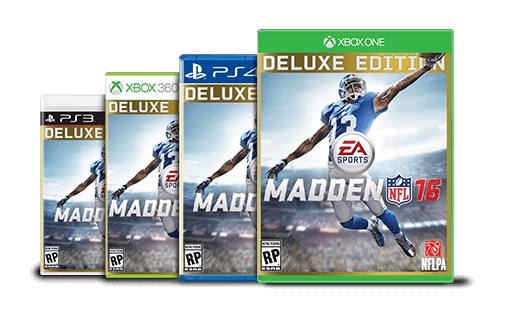 Is the Madden 16 Deluxe edition worth $10 more?

The Madden 16 Deluxe Edition is the new version of the Ultimate Edition that is $10 more and it includes $50 in added value. If you play Madden Ultimate Team, this is the version you want to buy.

For the $10 increase in price you get;

This includes three packs a week after the first week to help you build a better team. You need to log in each week to get the full value. Here’s a closer look at if the Madden 16 Deluxe Edition is worth buying.

There are plenty of Madden 16 deals around that allow you to upgrade to Madden 16 for as low as $8 if you have a trade-in and a Gamers Club Unlocked membership. If you don’t want to buy from Best Buy, you can still save at least $10 on the game from popular retailers. 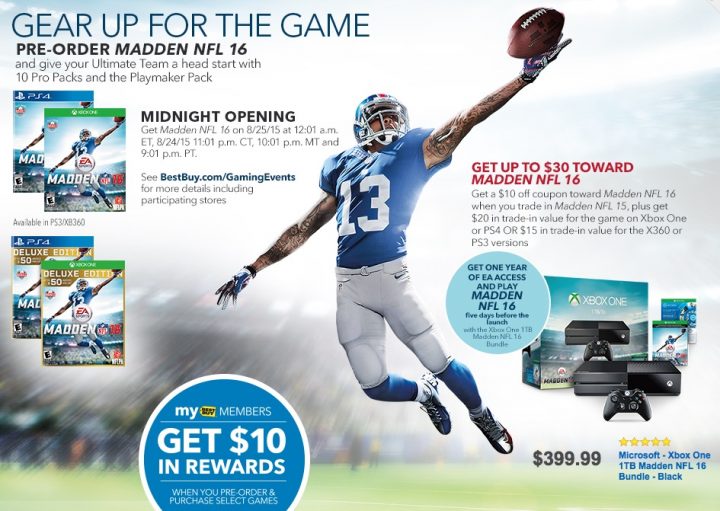 Madden 16 Deal for All

If you do this same deal with a Gamers Club Unlocked Membership the price you pay after all discounts drops to $7.99. The Deluxe Edition is $29.99 or $15.99 in those same scenarios. Even without a trade-in, you can get a $10 reward certificate when you pre-order.

An Amazon Madden 16 deal offers almost $10 off the game for Amazon Prime Members. When you add Madden 16 to your cart on Amazon you’ll see Prime Savings that drop the price to $49.99 for the regular version.

If you want to play Madden 16 right away, there are two major retailers opening up late to sell Madden 16 as soon as legally possible.

GameStop and Best Buy offer the game at 12:01 AM Eastern no matter where your currently at.

Most GameStop stores are open at 12:01 AM Eastern and a good number of Best Buy locations will open up for the Madden 16 release date. If you are in another time zone, you can buy Madden 16 as soon as midnight Eastern arrives.

Check to see if GameStop store near you are open for this event and to see if a Best Buy store is open for you.

@WordSmith317 No demo this year. But if you have an XBox One you can get it 5 days early on #EAAccess

One major annoyance to gamers is that there is no Madden 16 demo. For the second year in a row EA does not offer a way to play a limited version of the game. The only way to play Madden 16 early is to go to a GameStop or to play on EA Access on Xbox One.

You can choose to buy Madden 16 digitally for Xbox One, PS4, Xbox 360 and PS3 at the same price as a disk. This includes an option to pre-load, or download the game early, so you can play right at midnight.

The digital version of the game is available now on all platforms and will allow users to play at 12:01 AM Eastern and at the same corresponding time in other timezones.

If you buy the Xbox One Madden 16 Bundle it includes a digital copy of the game.

After playing through Madden 16 on the Xbox One we recorded a collection of Madden 16 gameplay videos that highlight many of the new Madden 16 features.

If you want to see full games of Madden 16 or highlights of the new Madden 16 modes like Draft Champions watch the video below and our round up of must see Madden 16 gameplay videos.

Of course there is a good chance you will stick with your favorite NFL team, but that’s something you may want to change up in the game after major changes in ratings.

Keep in mind that there are separate ratings for players in Madden Ultimate Team based on the cards you collect and earn.

Is it worth upgrading from Madden 15 to Madden 16? After playing through the early access option on Xbox One, we identified 10 changes that deliver a better experience and in make the upgrade worthwhile. Check out these new features and options in the slides below.