A lot of exciting phones are available right now, like the Pixel 4 XL and Galaxy Note 10. However, here’s what we want from the Galaxy S11, and why you should probably wait for it in 2020. This is everything we know so far and what we want to see from Samsung.

Details are still slowly rolling in and we don’t know everything yet, but with a codename like “Picasso” this phone should be a stunner to look at and be packed with new technology. We’re talking about bigger screens, faster screens, better cameras, under-display camera technology and faster charging, to name a few. 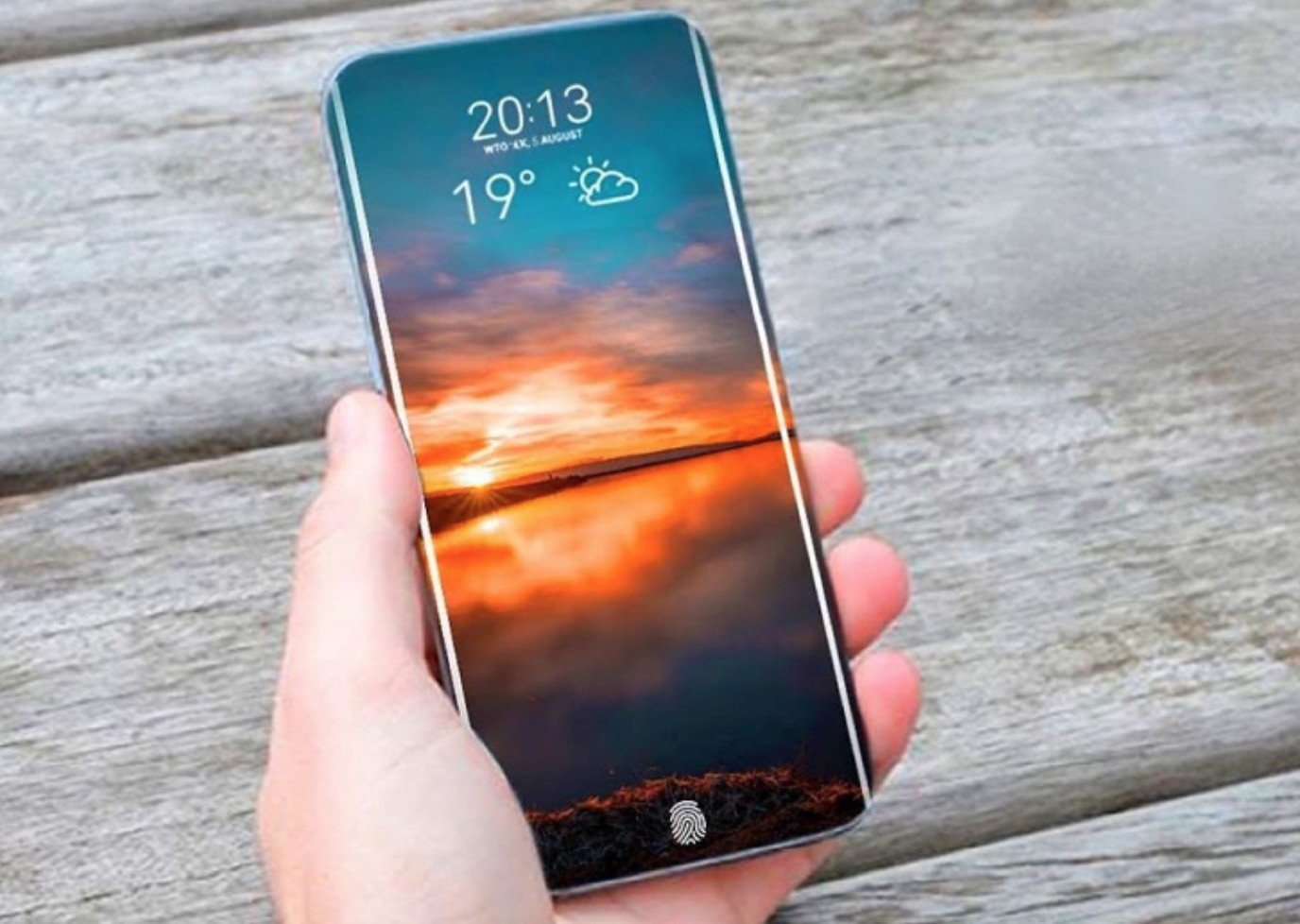 As you probably know, Samsung is already hard at work on new phones that are coming in 2020. They’ve already finalized the Galaxy S11 design and are likely busy working on the Galaxy Note 11 and Galaxy Fold 2. In May we learned that Samsung’s next Galaxy S already has an internal codename from the R&D department, and they’re making great progress. According to the popular leaster IceUniverse the Galaxy S11 is codename “Picasso”. This year the Galaxy S10 was known as “Beyond” behind the scenes.

So far we’re hearing the Galaxy S11 will have a bigger and better screen, possibly packing a 120Hz refresh rate. In fact, several leaks have all but confirmed Samsung will use a 120 Hz display, not 90 Hz like the Pixel 4. Expect the phone to have a slimmer profile and design than the Galaxy S10, tons of upgrades throughout, especially the new faster processor. However, we’re still several months away from actually having concrete information to share.

That said, perhaps the most exciting change and Galaxy S11 rumors so far are about bigger screens and regarding the cameras. Samsung’s stuck to the same sensor for the last four years, the 12 DualPixel sensor we know and love in the S7, S8, S9, and now with the Galaxy S10.

It looks like Samsung will FINALLY upgrade the camera in the Galaxy S11 with an all-new bigger and better camera. A higher Pixel and larger sensor will allow for more light, detail, and processing, and could put Samsung back to the top ahead of Google’s Pixel 4 and the iPhone 11 Pro. 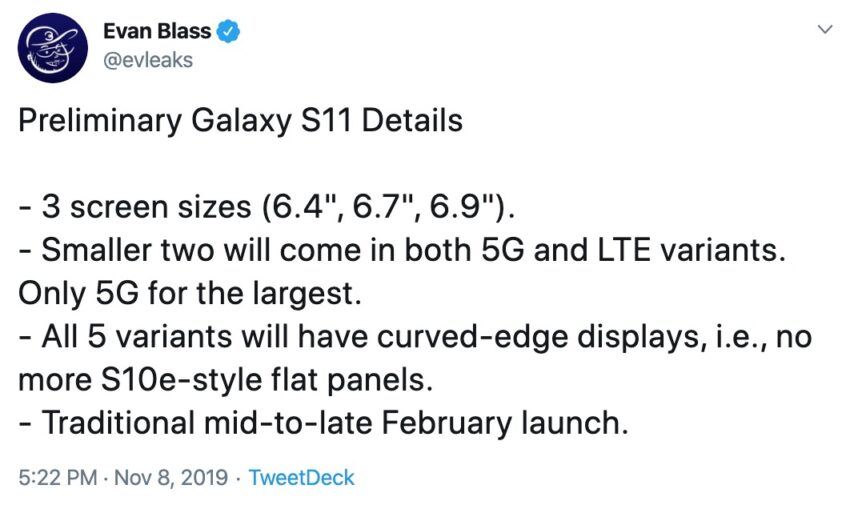 The Samsung Galaxy S11 release date is only around 2 months away and some of you might not have the ability to wait. That said, the Galaxy S11 should be on your radar, just like it is on ours. So much in fact, that here’s why you should wait and a list of what we want to see next from Samsung in 2020.

5 Things We Want To See Next on the Galaxy S11

We know Samsung has something big planned for the Galaxy S11, mainly because they’ve used the same design and components for the last several years. Plus, it’ll have to compete with the iPhone 11 Pro, Pixel 4, and the OnePlus 8 Pro. Will they surprise everyone with a bold new design, or just improve on the same one we’re all familiar with? If they truly want to shake things up we think Samsung needs to push innovation, and do something bold.

All of Samsung’s phones look similar, as that’s the brand style and identity. That’s fine. However, the last three years nothing really changed. The Galaxy S8, S9 and even the S10 are all nearly identical from the front and the rear. Aside from having more cameras or a camera in the screen, they are hard to tell apart.

The design isn’t flawed, but we’re expecting a sleek new bezel-free screen to take on the iPhone and Android competition. Whether that’s truly no bezel, a unique popup camera setup, or even an in-display hidden front-facing camera. Or, it could be something else entirely.

While the image above is nothing more than a fan-made concept, it does look wonderful. Additionally, we’ve already heard reports that Samsung has some truly new technology and creative designs in the works for later this year and early 2020. If you thought the S10, Note 10 or even the folding Galaxy Fold was special, it sounds like that’s just the tip of the iceberg.

Maybe whatever comes next will also be what completes the Galaxy S11. We’ll have to wait and see.

We want Samsung to actually find a solution for the notch in 2020, not just a way around it. So far the biggest trend in 2019 is the under-display fingerprint scanner and some sort of trick to hide the front-facing camera. Even if people don’t want a front camera, there are sensors on the top front of almost every device that serves an important purpose.

Samsung cuts a hole in the screen for the front cameras and sensors, OnePlus put it in a mechanical pop-up contraption, Apple does the notch, and we’ve seen a few other neat fold-out camera designs. However, it looks like Samsung will release a real solution to the notch in 2020, and that’s a big deal. See the “UPS” section in our image below. 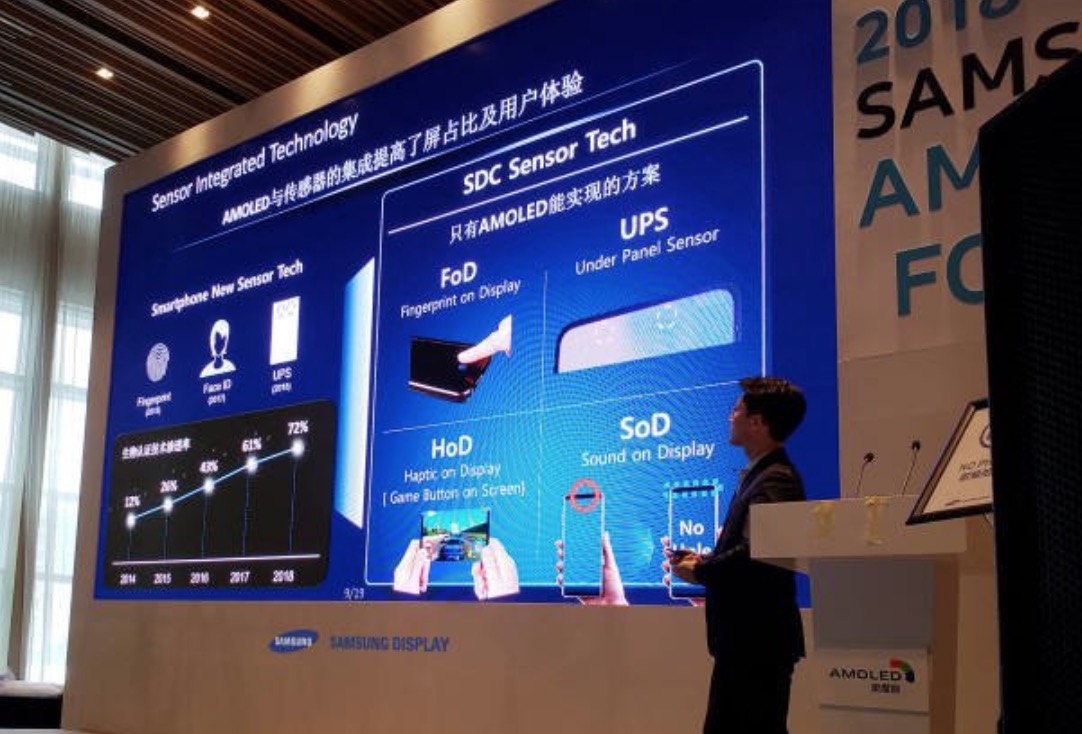 Shown above is an image from a private Samsung event from 2018. This teases some of the current, upcoming, and future technology from the company. Including the “fingerprint on display” we got with the Galaxy S10, and that same event showcased “hole punch” cutouts in the screen.

Moving forward, not only do we want Samsung to deliver “under panel sensors” with the Galaxy S11, we think it’s crucial to the success of the device. That means the front camera and sensors are under the screen, invisible, yet in no way affect the performance of the screen OR the camera. It’s coming eventually, and we hope it debuts on the Galaxy S11 and Galaxy S11+ in February of next year. It looks like we’ll probably get the same cutouts in the screen for at least another year, or with the S11, and could finally see under-display tech with the Note 11.

While we’re talking about the screen, we really want Samsung to deliver at least a 90 Hz display, but would prefer a 120 Hz screen. And, early leaks suggest we might get exactly that.

Samsung makes some of the best smartphone cameras on the market, but lately, they’ve started losing ground to the likes of Google’s Pixel series, or even the periscope cameras on Huawei phones. We want to see that change in 2020 with the Galaxy S11. And according to leaks, we’ll get exactly that — including the neat periscope camera. 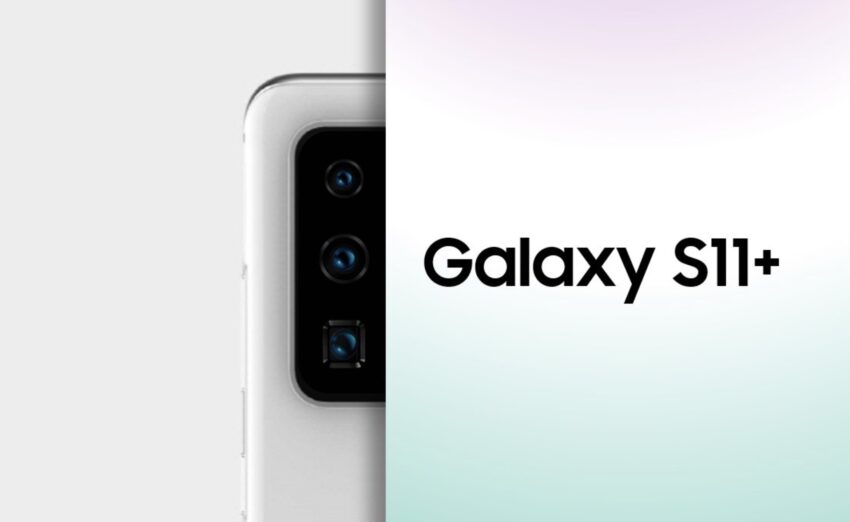 The image above came from a reliable leakster that wants everyone to know the back of the Galaxy S11 and Galaxy S11+ will look clean, organized, and good. Not ugly like the renders floating around. Furthermore, here’s what he had to say about these three main sensors.

The first is Samsung’s ultra wide-angle lens, then there’s a main 108MP dedicated camera, and on the bottom is the all-new 5x periscope camera. Then, on the right is at least 1-2 more cameras, a depth-of-field sensor, and the flash.

As we said earlier, Samsung will finally use new an all-new camera sensor and technology in the Galaxy S11, and we’re hoping they employ some 5x or even 10x optical zoom lenses as well. Reports claim they’re using a 108 MP camera, which they could bin down to 16MP and maybe offer a crazy zoom. Basically, wait for the Galaxy S11 if you want one of the best cameras ever on a phone.

Lately, two things are starting to disappear from smartphones, and we don’t like it. Samsung is one of the few remaining manufacturers that still offers a headphone jack with phones, well, until the Note 10, and we’re pretty sure they’ll get rid of it for the Galaxy S11 too, sadly.

And while Bluetooth headphones are readily available and don’t need a headphone port, something even more troubling is starting to happen. Phone makers are trying to get rid of every port and button. 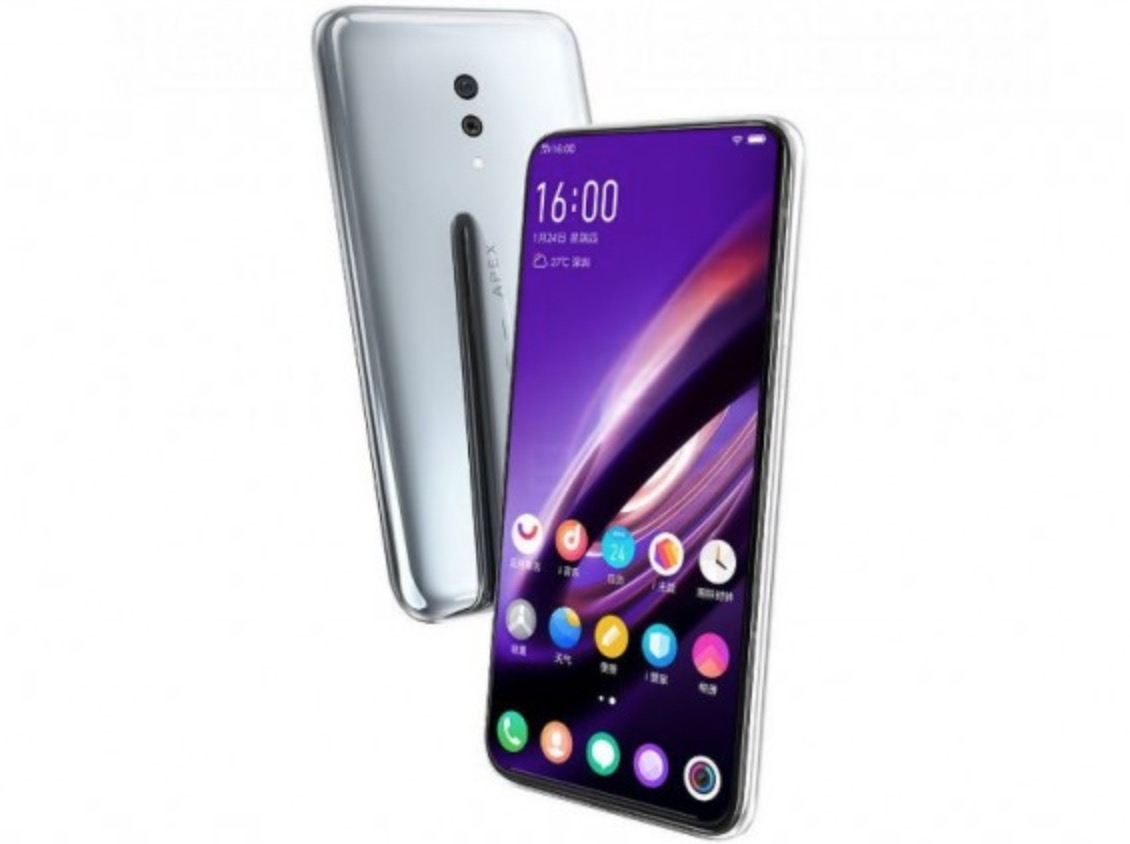 Vivo Apex — no buttons and no ports

Basically, we want Samsung to stick with the headphone jack, microSD slot, and physical buttons for a little longer. Don’t remove the buttons until Android’s software is good enough that we don’t need them. And don’t remove all the ports in favor of slower wireless charging technology. Just don’t.

In fact, don’t get rid of wired charging until wireless charging is contact-free wireless. So phones charge while we use them at home. It’s coming, eventually.

Last but not least we wanted to highlight several smaller things that combine to deliver a great all-around experience. Ones that we want to see from the Galaxy S11 early next year.

Samsung’s Galaxy S10+ has some of the best battery life of any phone I’ve ever owned. Thanks to Android 10 and a huge 4,150 mAh battery. However, things can always be better and we’re hoping for higher battery capacities in the Galaxy S11 family of phones. Early rumors suggested the S11 would be thinner than the S10, but we implore Samsung to offer a phone a hair thicker, not thinner, and add a bigger battery.

And luckily, the latest reports claim the Galaxy S11+ will have a 5,000 mAh battery inside and that Samsung is finally going all-in with huge battery cells. 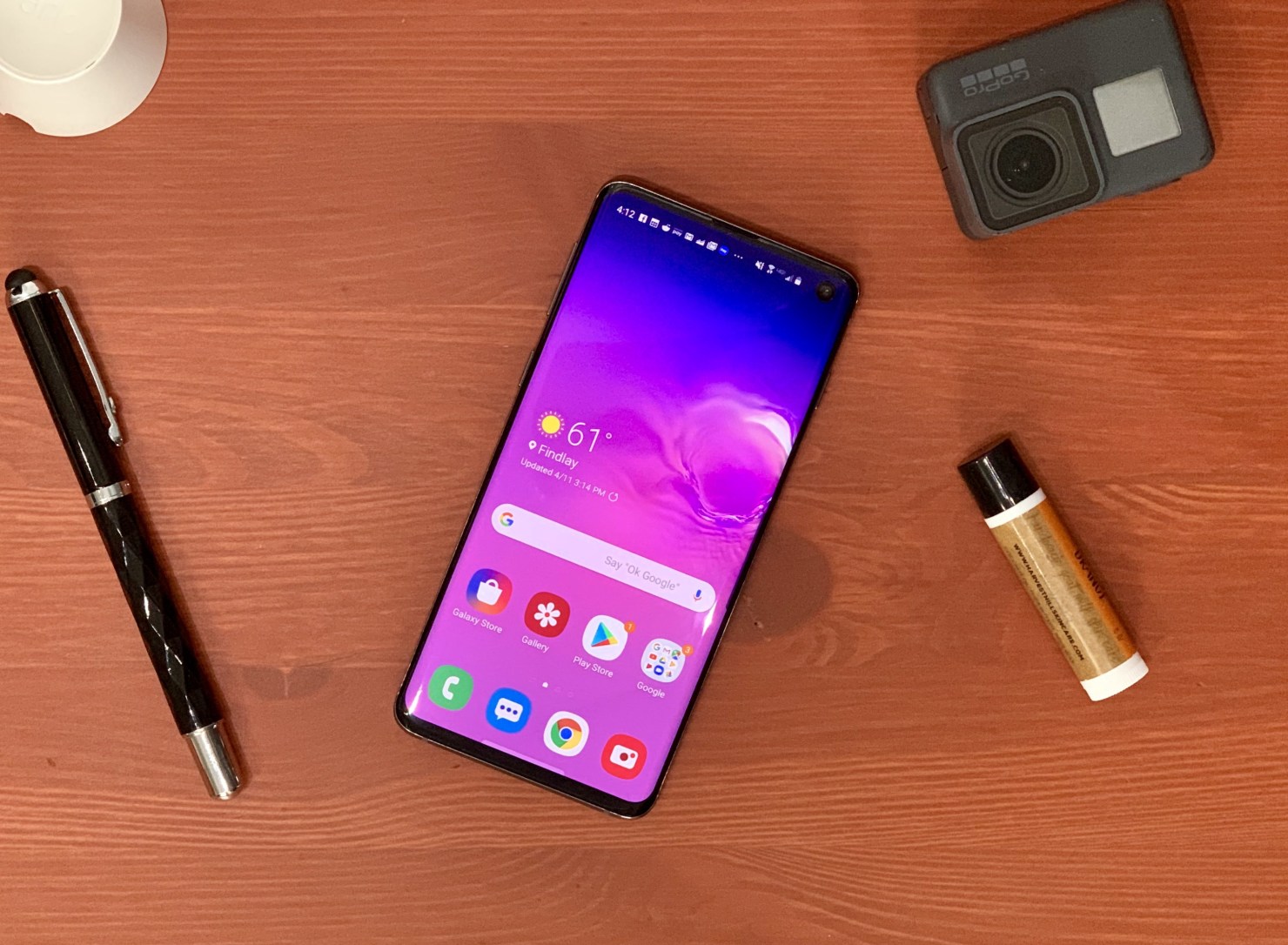 Then, it simply goes without saying that everyone wants better performance. We’re not talking about super-fast 10-core processors either. Instead, we want better performance from the software experience. Samsung really improved the core experience with One UI based on Android 9 Pie, and with One UI 2.0 based on Android 10, things are even better and faster than ever. It’s the best Samsung’s made to date.

And finally, we want to briefly mention 5G, mainly because it will be a huge talking and selling point throughout 2020. You can go buy a Samsung Galaxy S10 5G or Note 10 5G right now. However, they’re silly expensive, get hot, don’t last very long, and carriers charge even more for the 5G services. We’re hopeful that Samsung can deliver a truly affordable 5G experience with the Galaxy S11 next year. We’re hearing both the Galaxy S11 and S11+ will have 5G on ALL versions, so 5G for all, which is part of the reason for huge batteries inside. The only model that won’t have 5G is the affordable S11e.

If Samsung can put the sensors and camera under the screen, debuts new camera technology that beats the iPhone 11, add in superfast charging and capable 5G for everyone, these will be the best phones of 2020 and beyond.