The 2019 Mazda Miata RF is a hard top convertible that’s ready and willing to be your daily driver, even in the winter. I recently had the chance to drive the 2019 Miata RF through snow and the Polar Vortex that chilled the midwest to the bone in 2019 and came away impressed by how livable the Miata RF is in cold weather and how well it handles in the snow and ice with Blizzaks installed.

While it’s more expensive than the soft top Miata that’s won the hearts of buyers for two decades, the RF’s hard top makes it an ideal companion for the daily driving in the winter and ups the overall value of owning a Miata anywhere that a soft top convertible is impractical for more than a quarter of the year.

Driving The Miata RF in the Winter

The Mazda Miata is an impractical car with a tiny trunk and room for only two, but it is an incredibly fun car that connects with many drivers, including myself. One of the biggest challenges with the standard soft top Mazda Miata is living with it in the winter. It’s a challenge with any soft top in areas where the winter temps often hover near zero for a few weeks.

With the hard top on the Miata RF, it’s ideally suited for the coldest of times in the midwest. I took the 2019 Miata RF for a week of testing during the Polar Vortex when the temperatures were well below zero most of the week. How did the 2019 Miata RF handle the cold and the snow? Like a champ.

The heater was quick to warm up the cabin and defrost the windshield, partly because of the hard top and partly because it is a very small cabin to start with. I was able to drive comfortably with the top up in the coldest temps I’ve seen in years, and for testing purposes even stayed relatively warm with the top down for small periods.

Since it is a hard top you can raise and lower it in cold temperatures without worrying about damage. The seat was a little more cramped with my bulky winter coat on, but I am not a skinny driver and I still had enough room.

When snow fell and ice covered the local roads the Blizzaks kept me in control of the 2019 Miata RF when I was driving around, but I was still able to push it and kick out the rear end a little when I wanted to. For all the other daily driving impracticalities that come with choosing a Miata, you don’t need to add owning a second car for the winter to your list.

I remain impressed with the handling on clear roads as well, where the fun can really shine when the sun melts all that snow and ice. Here’s a look at my time with the Miata RF in sunnier, warmer weather.

I tested the 2019 Mazda MX-5 RF Club with a manual transmission. You can opt for an automatic, but the Miata really feels perfectly paired with the six speed manual.

The 2019 Mazda Miata RF is an incredibly fun car that offers a lot in a small package. It’s not for everyone, but if you feel the desire to own a Miata, you should consider the RF if you live in a colder climate.

With a little more power than the outgoing model, and a hard top that makes it a little more practical in the midwest the 2019 Miata RF is a good car. It’s missing Android Auto and Apple CarPlay support and the passenger may be a little cramped, but arguably you’re picking the Miata for driving more than how comfortable the passenger is. That said I’d still like to see CarPlay and Android Auto offer up easier navigation and controls on road trips.

There are also a few quality of life improvements including a standard backup camera and a telescoping steering column that will help some drivers get a more comfortable driving position. Mazda also offers new options including new safety features for 2019 including low speed automatic emergency braking. 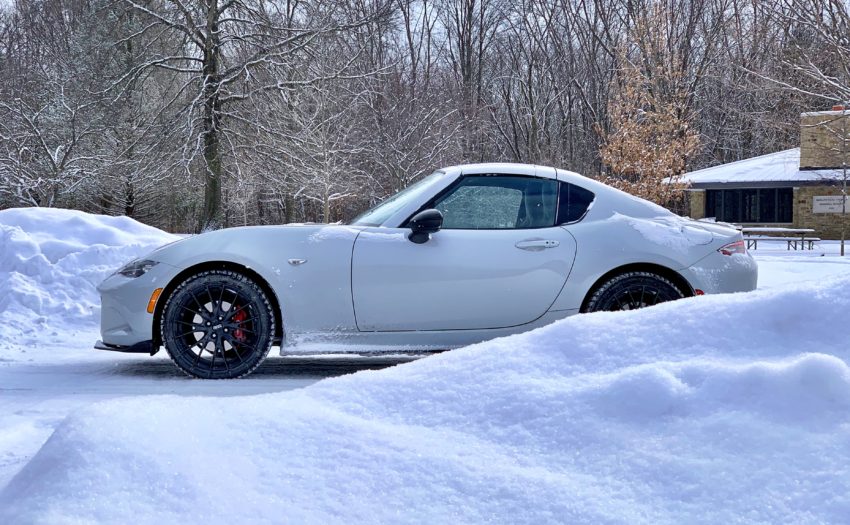 The 2019 Miata RF as tested is a beautiful machine with flowy curves and beautiful angles. The hard top accentuates the design, and really upgrades the look when the top is down.

The standard MX-5 Miata’s look is iconic, and the RF builds on this in all the right ways. Plus, you also get a really cool power hard top that is easy to use and attention grabbing when you put the top down at a light. And not just because it was -23 with windchill when I did it. The hard top takes between 10-15 seconds to open, so you can easily put it up or down while you wait in traffic or when you need to run into a store.

I tested the 2019 Miata Club RF with the appearance package and Brembo with black roof package. The accented black roof looks amazing with the Ceramic Metallic paint. Colors are muted compared to many sports cars, but you can opt for a rich Soul Red Crystal. The Dark Alloy wheels and red Brembo brakes complete the aggressive look. 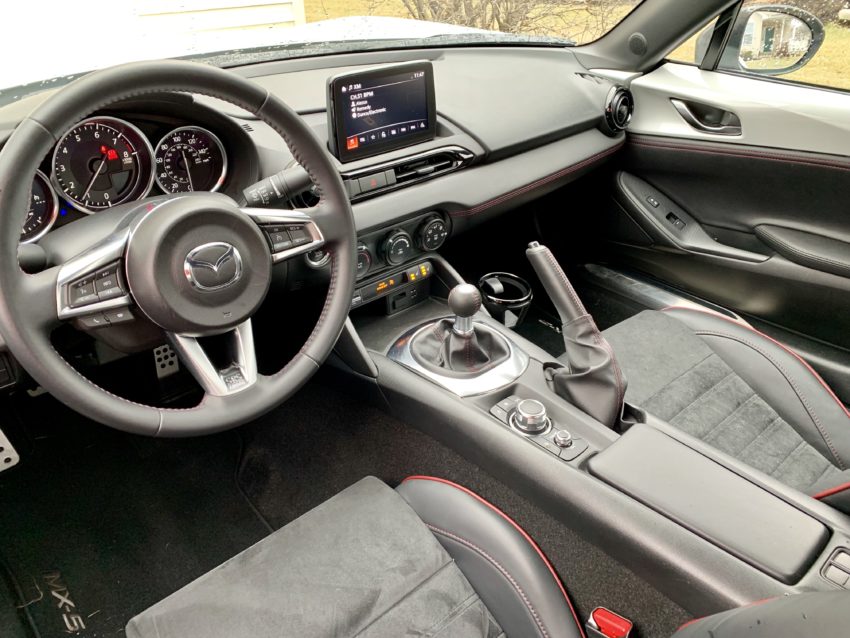 A small cabin, but comfortable with heated Recaro seats.

Yes, the trunk is tiny and the cabin is small, but this is a two seater roadster. In the driver seat I felt like I had enough room as a 6 foot tall 230 pound man. The passenger area feels a little more cramped and there is no real seat adjustment to speak of. Headroom is ok for everyone inside, but the passenger’s feetroom may be an issue.

The new telescoping steering wheel is a nice touch and helps you find a better driving position. The Recaro seat bolsters aren’t that aggressive, offering up enough support without digging into your sides. I appreciated the heated seat option while driving in cold weather.

The 2019 Mazda Miata RF includes new safety features, but it is missing one of the biggest Mazda tech features we’ve been hoping for.

While you will find Apple CarPlay and Android Auto on several Mazda models and available as a retrofit upgrade for some older models, neither is available on the 2019 Miata or Miata RF. 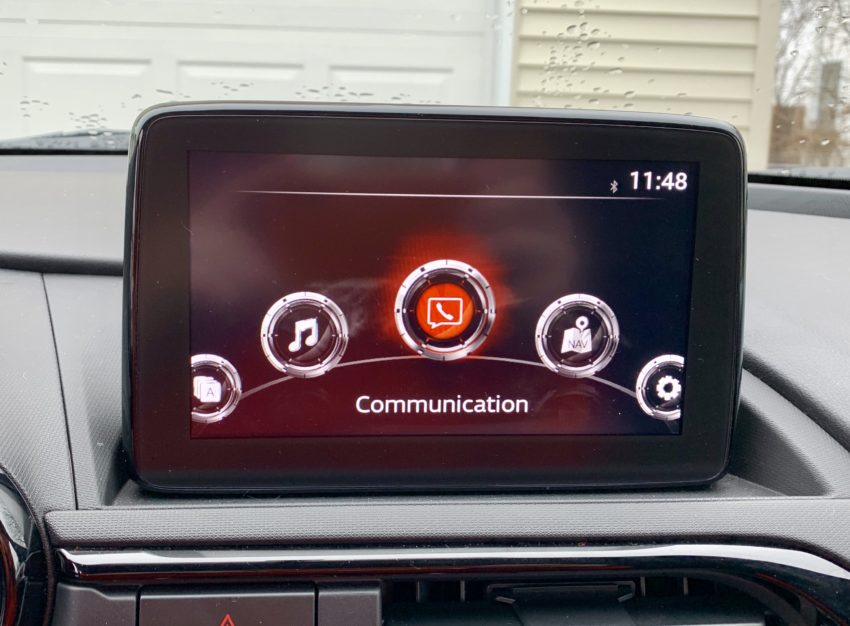 The Miata RF doesn’t have Apple CarPlay or Android Auto yet.

The built-in Mazda Connect system is OK, and the controls are easier to use than the Lexus Remote Touch Interface, but you still need to use a dial and joystick approach when the car is in motion. At a stop, the touch screen is available to use. There is some hope that the upgrades will come to the Miata RF, but you shouldn’t count on it if you decide to buy.

Mazda’s sound system isn’t going to blow you away, but it is better than I expected in the small cabin and the driver headrest speakers make taking calls over Bluetooth and listening to podcasts or audiobooks easier.

A backup camera is standard with the 2019 Miata RF and you also get an optional package that adds smart city brake support, which is a a low speed automatic emergency braking feature as well as lane departure warning, blind spot monitoring and rear cross traffic alert.

The automatic braking is a nice feature, but my favorite part of this package is the blind spot monitor, which helps you know if anyone is in your blind spot while changing lanes.

You Need These 10 Must Have Car Features: Find Out Why
Related Topics:2019 Mazda Miata RF2019 Miata2019 Miata RFBlizzakBridgestonehard topMazdaMiataTechnologywinter