The Call of Duty: Black Ops 4 release date is just over a month away, and the Blackout Beta starts next week. That means it’s finally time to learn about the new Battle Royale mode that up until this week has been shrouded in mystery.

We now know about the Blackout vehicles, get our first look at the Call of Duty: Black Ops 4 Blackout map, know how many players will be on the map at once and other key details.

This comes from David Vonderhaar, so it is all official information. Some of the news arrived on Twitter from the Call of Duty account, and other information comes from a GameInformer interview Vonderhaar gave this week.

FYI, there are Zombies in Blackout, and you can run into them at specific spawn points. The final circle can include zombies depending on the location. 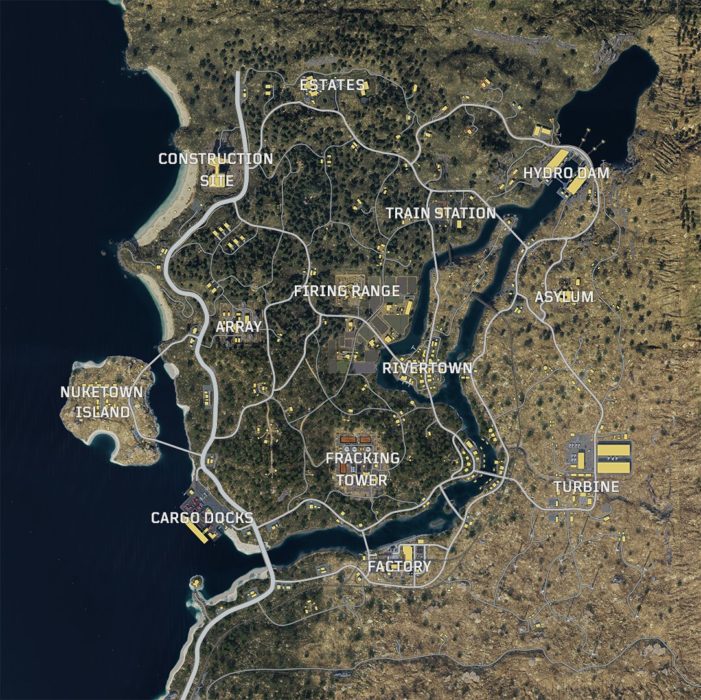 This is the Call of Duty: Black Ops 4 Blackout map.

This is the Black Ops 4 Blackout map. It’s made up of a variety of Call of Duty locales that you’ve already played. There is a mix of land and water areas to traverse with a variety of vehicles. Nuketown Island is one of the most recognizable areas of the map. When you are entering, there is a sign that shows you how many players are on the island. Other prominent areas on the map include;

There are also other clusters of buildings scattered throughout the map that you can drop to. You enter the map by helicopter and jump out with a parachute. You also wear a wingsuit that allows you to jump off a big building or cliff and survive. As of now there is only one map known.

How Many Players Are in Call of Duty: Black Ops 4 Blackout Mode

The Call of Duty: Black Ops 4 Blackout player count is 80 players at the start of the match. This is the player count for the beta, and it may change for the final release.

“What’s really more important to us than a number is that the gameplay experience is as refined as it can be, that’s it the ideal perfect format for what players are going to play. So we’re starting with 80 players, but we’ve gone higher than that. Whenever we launch a game as a beta or whatever, that’s the beginning of something. We’re going to actively be participating in the community and taking feedback, making changes and adapting, evolving the game as feedback rolls in. So there’s a lot that can go on that can happen beyond that first impact of the game going out there.” Vonderhaar tells GameInformer.

You’ll dive into the Blackout game with 150 health, just like a normal map. You don’t have unlimited health boosts like in a standard match though. You’ll need to loot and look for bandages, trauma kits and major med-kits that can boost you to full health.

This is different from games like Fortnite and PUBG, as you can get back to full health using just bandages. PUBG and Fortnite limit you to about 75% health without boosting or using a special health kit.

Unlike PUBG and many other Battle Royale games, you will be able to take to the sky in Blackout. This is a Battle Royale game with land, sea and air vehicles at your disposal. There are are four vehicle types in the game, and we could see more added over time.

The Cargo truck includes added inventory space, so you can actually add items to it to haul them across the map. Vonderhaar tells GameInformer that players should be cautious as it isn’t that hard to blow up and with it all of your loot.

Thanks to the GameInformer interview and expose, we know that there are 24 different Blackout weapons available. There are 17 weapon attachments that you can use to upgrade your weapons and 8 primary ammunition types. You also get access to;

You can find Ruin’s grappling hook on the map and use it to get around. Based on that and the Warhammer, look out for additional specialist items on the map as you play.

This could change over time as the game evolves. The perks will allow you to get an edge on opponents similar to how they work in the standard Call of Duty: Black Ops 4 matches. Thanks to the digital edition of  GameInformer we know that some of these include;

It will be important to find the Blackout perk that works best for you, and you will want to spread these out across your squad for the best chance at winning. These are consumables, so you need to pick them up on the map and they only last for a specific period of time.

There are 20 different characters in the Blackout game mode that you can play as. Many of these will be unlocked as you complete missions in the game. You’ll be able to start with a few characters from Treyarch games, but if you want more you will need to take on specific tasks in the game.

One example shared in the interview is to unlock Battery in Blackout. You need to find the War Machine weapon in the game, get a specific number of kills with it and then finish in the top 15.