This is a great time to buy a PS4 or the PS4 Pro. Forget waiting for the PS5, the best Black Friday 2018 PS4 deals are here to cut the price of upgrading to a new console by $100. You can even stack on more savings when you buy with bundled games like the new Spider-Man PS4 game that comes with many of these bundles.

Keep an eye out for early Black Friday 2018 PS4 deals that you can buy online. There are a few deals worth lining up for, and you can expect to save about the same at all retailers, but there are a few surprises out there that can help you save even more.

The Ps4 Slim is on sale for $100 off at most stores for Black Friday. This is a good deal, and while there aren’t as many deals as you will see on the Xbox One S, you can still save as much.

We could see some other deals arrive in the run up to Black Friday and Thanksgiving, but the standard discount is $100 off the PS4 Slim. Look for an online option instead of spending any in-store time shopping for a deal that is available almost everywhere. 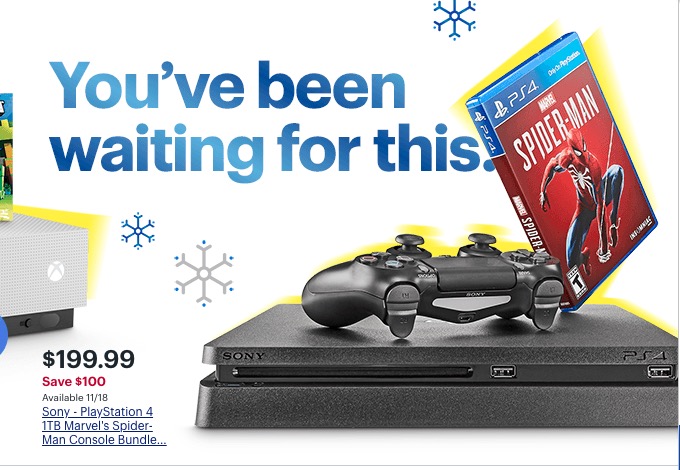 So far there aren’t any major PS4 Pro Black Friday 2018 deals. Microsoft is leading the pack with loads of Xbox One X Black Friday deals that cut the price to $399, in line with the PS4 Pro.

The PS4 Pro is a better overall value than the PS4 Slim since you will be able to play games in 4K. If you plan to keep your console for years, the $200 price difference during Black Friday is a tough jump, but it may still be worth waiting for a bigger PS4 Pro deal. Plenty of games already look better on the PS4 Pro, and many more will come with PS4 Pro enhancements soon. It’s still too early to wait for the PS5.