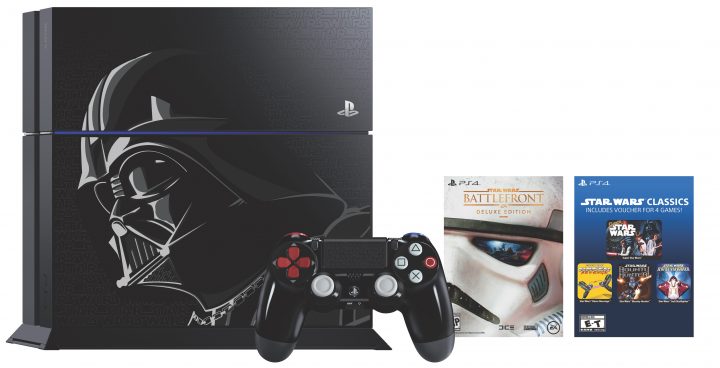 The Star Wars: Battlefront release date is November 17th, and that is when you will be able to buy these special Darth Vader PlayStation 4 editions at select retailers. Here’s a quick look at the new PS4 Darth Vader edition console and what we know about them.

This bundle includes the Star Wars: Battlefront Deluxe Edition, normally priced at $69.99 and a code to download four classic Star Wars games on PS4. This includes, Super Star Wars, Star Wars: Racer Revenge, Star Wars: Jedi Starfighter and Star Wars Bounty Hunter. These are available for the first time on PS4, and will come as a paid download option to owners with a PS4 already in their possession.

The second Darth Vader PS4 bundle is an insanely attractive option for gamers who are addicted to the Disney Infinity line of games. This is a Disney Infinity 3.0 PS4 Star Wars Bundle that includes;

This special Disney Infinity 3.0 Darth Vader PS4 bundle is only available at Walmart.

In the announcement Sony states that both of these are limited editions. We could see a small supply with stock that sells out as fast as the Call of Duty: Black Ops 3 Juggernog Edition or the Fallout 4 Pip Boy Edition.

There is also a normal PS4 with the voucher and Star Wars: Battlefront coming to gamers. Sony would not confirm any plans to sell the special Darth Vader PS4 controller separately.

Sony did not confirm any Darth Vader PS4 price or a specific Darth Vader PlayStation 4 pre-order date. Sid Shuman, blogger and digital communications for PlayStation shared the only update on this information writing, “No pre-order or pricing details available yet, but should be coming soon!”

It would make sense to see a higher than average price for the special Darth Vader PS4 bundles with a $69 game and four classic games on top of the special look.