For months the iPhone 6 release date rumors focused on a typical September release window for one of the new iPhone models and a holiday season release for a larger model, but this latest report suggests Apple is gearing up to deliver an iPhone 6 early.

We expect to see two iPhone 6 models in 2014, and most rumors agree that buyers can expect a 4.7-inch iPhone 6 that is designed for use with one-hand and a larger 5.5-inch iPhone 6 that is a Galaxy Note 3 or Note 4 competitor that will is more of a two-hand device. iPhone 6 rumors suggest Apple is closer to bringing the 4.7-inch model to production and every day we see new iPhone 6 mockups show us what a thinner and larger iPhone might look like.

As we draw closer to Apple’s first major event of the year, where the clock will start ticking towards a fall iOS 8 release, this new report means potential iPhone 6 buyers should start saving, and possibly hoping for this means they will be able to buy the iPhone 6 before summer is over. 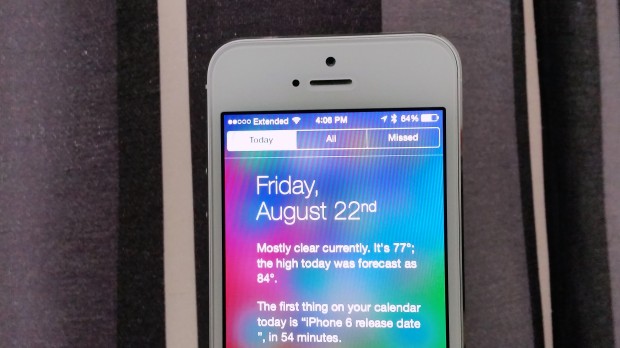 A report from Taiwan in the Economic Daily News claims Apple is ready for an early iPhone 6 release date in August 2014, for the 4.7-inch model. The larger 5.5-inch or 5.6-inch iPhone 6 release is reportedly not ready until September. These two devices combined could result in over 80 million iPhone 6 unit sold in 2014, according to the report.

Both of these reports focus on the 4.7-inch iPhone 6, with a larger model coming later in the year. This would mark the first time Apple releases an iPhone in August, if it is true.

We anticipate two iPhone 6 models with a new look, but that share a similar design. So far leaks point to a thinner iPhone 6 measuring 6mm to 7mm thick, down from a 7.6mm thick iPhone 5s. The design leaks suggest a look that resembles the iPad Air and the iPod touch 5th generation with curved edges and new volume buttons. The iPhone 6 may also feature a power button on the right side to make it easier to reach on a larger device. Inside expect an Apple A8 processor, 1GB RAM and sensors to track movement. We expect some iPhone 6 camera improvements, but there is not enough agreement on what to expect at this time.

If Apple does choose an iPhone 6 release in August, shoppers should expect a change in the Apple Back to School 2014 deals. During 2013 Apple offered a $50 gift card for the app store when a user purchased an iPhone 4, iPhone 4s or iPhone 5. Apple Back to School deals typically last into September and always end before a new iPhone is announced. Even though the iPhone 5s deals arrived fairly quickly in 2013 Apple is not likely to offer the equivalent of 25% off the iPhone 6 price the same day it goes on sale.

So far in 2013 Apple retired the iPad 2 and brought the iPad 4 back from the dead, delivered a new MacBook Air with a $100 price cut and, well, that’s about it. The first half of 2013 will likely pass without any major Apple announcements as the company appears set to save new Apple products for the second half of 2014.

Here’s a closer look at the iPhone 6 and other top Apple products we expect to see in 2014, including a new iPad Air and iPad mini with Touch ID.