Video games and small electronics retailer GameStop won’t be open on Thanksgiving Day. That isn’t stopping the retailer from getting in some early Black Friday 2015 deals and sales. The company has kicked off what it’s calling the Pre-Black Friday sale. Shoppers get big discounts on some very attractive PS4 bundles. There’s also some extra savings on games for GameStop Power-Up Rewards Members.

GameStop began its Pre-Black Friday 2015 sale earlier this week. Typically, retailers don’t actually start offering their best savings of the year until the day after Thanksgiving when shoppers are mostly off and ready to get their holiday shopping done early. With more stores and services rushing to offer deals on Black Friday, GameStop and a few other companies have expanded their savings before and after the holiday. Earlier this week GameStop boosted trade-in values for shoppers in preparation of the holiday. 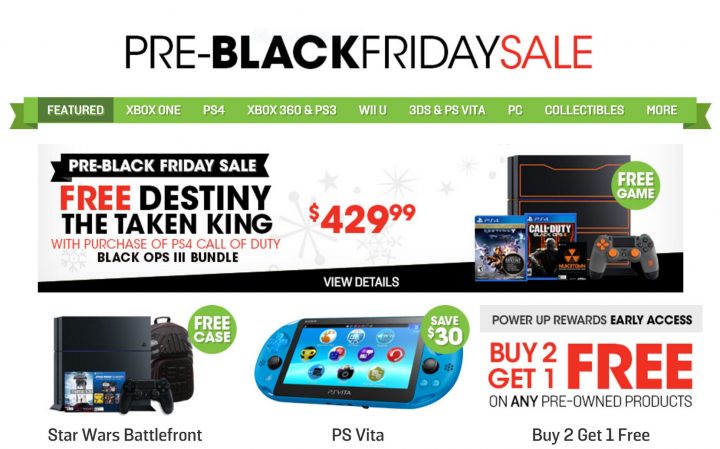 Anyone with a Power Up Rewards Pro membership gets to purchase two used games at GameStop and get a third used game absolutely free. Language on the deal indicates that others will get access to the savings in due time. Power Up Pro is a yearly subscription service that gets gamers discounts on strategy guides, boosts in trade-in value and more.

The Call of Duty Black Ops 3 PS4 Bundle that includes a 1TB internal hard drive for the console and a copy of the game itself, now comes with a copy of Destiny: The Taken King for $429. The Star Wars Battlefront PS4 console bundle still sells for $349, but now includes a free PS4 carry case that’s perfect for anyone who travels with their console often.

GameStop is also knocking $30 off the price of the PS Vita to just $169.99. The PS Vita is Sony’s handheld video game console. There isn’t much in the way of new games for the handheld, but Remote Play and cross-platform buying still make it a terrific companion for the PS4. Also, it supports the PS4’s PlayStation Now cloud gaming service.

The GameStop Pre-Black Friday 2015 sale does include some discounts on specific games and accessories. Bloodborne and Until Dawn for the PS4 save as much as $30. Xbox 360 and PS4 versions of Grand Theft Auto 5 are $19.99 each. That’s the lowest they’ve ever been since the game is still enormously popular and still received content updates for free until fairly recently. Physical accessories inspired by Minecraft are half off, bringing them down to $9.99 each. There 18 pages of heavily discounted games for Windows PCs.

All told, this Pre-Black Friday sale is a good opportunity to save on lots of console extras and games before the Holiday 2015 shopping season officially begins. GameStop won’t open on Thanksgiving Day, saying that it’s “taking a stand” against such practices. The retailer will open at 5 A.M. on Thursday and offer deep discounts on tons of items. Every Xbox One console bundle will have its price slashed by $50. This’ll bring the cost of purchasing an Xbox One Elite Console with no extra games and 1TB of storage to $449. GameStop says it’ll be the only retailer to offer this bundle. The Gears of War Ultimate Edition Xbox One console will sell for $299. Not to be left out, Sony announced that its Uncharted: The Nathan Drake Collection PS4 Console and bundle will sell for $299. There won’t be a price adjustment for other PS4 bundles.

There are discounts on Xbox Live, external hard drives, wireless controllers and other extras running this entire weekend at GameStop.