The iPhone 6 release date rumors including talk of two iPhone 6 screen sizes, an all new iPhone 6 design and specs that help Apple catch up to Android in key areas. As we move within a month of the anticipated iPhone 6 release date and a fall full of new Apple products the AAPL stock is nearing an all time high.

AAPL stock climbed in June when ahead of a stock split and the iOS 8 announcement and again at the end of July near the Apple Q3 Earnings report release. Now, just four weeks ahead of the rumored iPhone 6 release Apple stock is climbing within 1% of an all time high.

Just ahead of the stock market close Apple stock AAPL reached 99.16, which is just below the all time high of 99.37. This is a 1.20% increase in AAPL stock so far today. 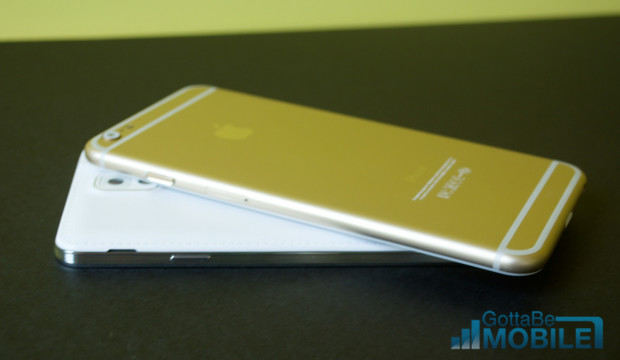 As the iPhone 6 release date approaches Apple stock nears an all time high.

Apple’s iPhone 6 release remains important to investors as Samsung pushes ahead with a new Galaxy Note 4 release around the same time, with sights set clearly on stealing marketshare from Apple. The larger 5.5-inch iPhone 6 will allow Apple to compete with Samsung in ways that it has not in the past and analysts predict that this could help convince some users to upgrade to the iPhone 6 from Android or stay with the iPhone instead of switching to the Galaxy Note 4 in September.

Apple has yet to confirm the iPhone 6 release date, or the iPhone 6 event that The Wall Street Journal and Re/Code both say will take place on September 9th. Samsung and Motorola are prepping events to announce competitors including the Moto 360, a smartwatch that will take on the rumored iWatch, on September 3rd and September 4th. 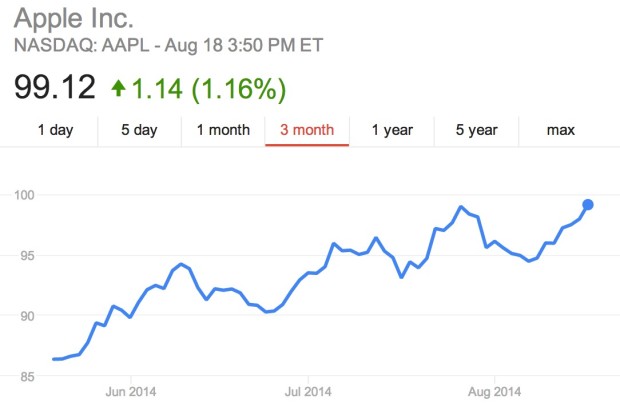 If the iPhone 6 release date chatter stays on the current path Apple will deliver a new iPhone on September 19th. This is a week before the Apple Q4 2014 end date. This timing allows Apple to book the opening weekend of sales, typically measured in millions, before closing out their fiscal year.

There is a chance that a larger 5.5-inch iPhone 6 release date will come later, as it is farther behind in production. Recent leaks hint that Apple is finally making progress on this larger model.

No matter when the iPhone 6 release dates end up on the calendar, it makes sense for Apple to announce two iPhone 6 models at once, to prevent confusion and questions from cutting into release weekend sales.

Part of the appeal to AAPL investors is that this iPhone 6 release could usher in a higher iPhone 6 price. Raymond James analyst Tavis McCourt tells WSJ MarketWatch that Apple may charge a $100 premium on the 5.5-inch iPhone 6. Chris Caso of Susquehanna Financial Group and Jefferies analyst Peter Misek both predict a $100 price jump for at least one iPhone 6 model. 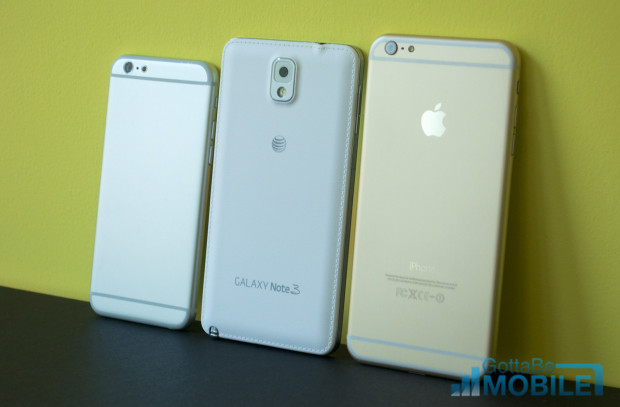 The iPhone 6 release should kick off a busy fall of new Apple products for 2014.

The iPhone 6 release date will usher in the start of Apple’s fall lineup, that may include an iWatch, two new iPads and a new Macbook Air Retina among other devices. This avalanche of new Apple products for 2014 will arrive in Apple’s Q1 2015 according to analyst timelines and could help push AAPL stock even higher after a year with minuscule announcements.

The Apple 2014 product slideshow below outlines the potential new Apple gadgets that we could see in the next several months. If anything after the iPhone 6 will push Apple stock higher, these are the products that will move the needle.