Later this fall, the Lenovo Miix 520 and Lenovo Yoga 920 will launch with the latest Intel processors and better Cortana support than even Microsoft’s own 2017 Surface Pro. On top of that, the new Lenovo Explorer and Lenovo Home Assistant Pack will bring the company’s technical know-how and futuristic ideas to two new areas: home automation and virtual reality.

Lenovo announced the Miix 520, Yoga 720 12-inch, Yoga 920, Explorer Headset and Home Automation Pack at this year’s IFA 2017 trade show. Though they might seem like very different products, they’re all designed with the same goal in mind. Shoppers that buy them are preparing for a future where personal assistants and virtual reality help them work and stay entertained. Each of these devices launches this October.

For the Lenovo Miix 520, Yoga 720 and Miix 920, that future centers around digital inking and Cortana, Microsoft’s personal assistant. Each of these Windows 10 PCs has a microphone array that can hear buyers utter a command from feet away. Also, the Miix 920 and Miix 520 harness the power of Intel’s new 8th Generation Core processors. 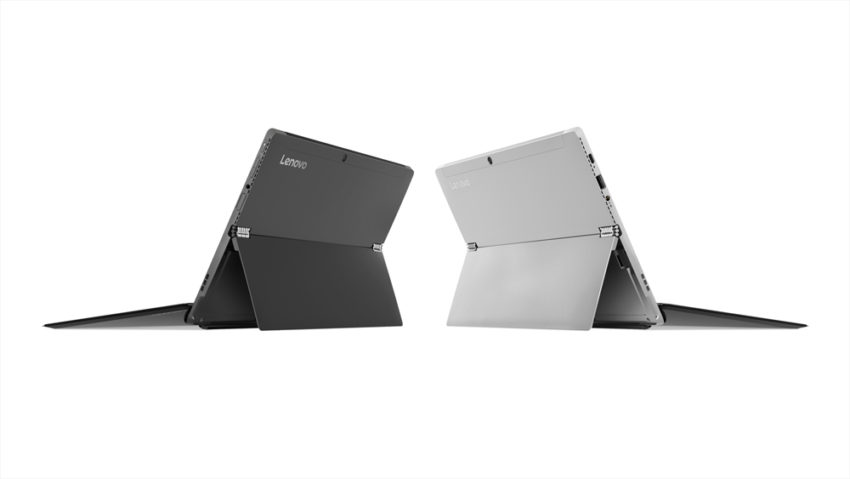 The Miix 520 is the most like the Surface Pro of the three computers. It’s a tablet with a detachable keyboard that has an adjustable kickstand on the back. Buyers can expect 7 hours of battery life from it.

Microsoft’s Windows 10 Fall Creatures Update adds new apps that Miix 520 buyers use better than other PC owners. The tablet’s new WorldView Camera can act as a 3D scanner for dropping things into Paint 3D and Windows 10’s other 3D and other 3D apps. Also, the far-field microphones in the Miix 520 let Cortana hear users from 13 feet away, like the Amazon Echo. Thanks to LTE, buyers don’t need to hunt for free Wi-Fi everywhere they go.

The tablet’s $999.99 purchase price includes a backlit keyboard cover and the new Lenovo Active Pen 2 stylus that can detect 4,096 pressure levels. Buyers can choose a black or silver model.

The new Lenovo Yoga 920 is an update of the excellent Yoga 910 that Gotta Be Mobile reviewed late last year. Lenovo describes this $1,329.99 notebook as its flagship Windows 2-in-1. 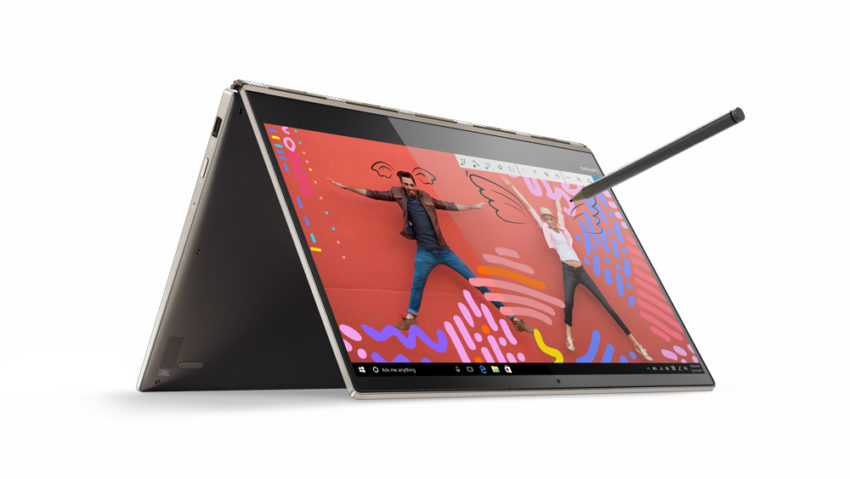 A lot of the changes are internal. Buyers can add up to an Intel Core i7 processor, 16GB of RAM and 1 TB of speedy solid-state storage to the thin notebook. All models come equipped with the same far-field microphones for Cortana and a fingerprint reader for Windows Hello. Buyers can upgrade to a 13.9-inch 4K display or settle for a 13.9-inch HD display. It has 2 USB Type-C Thunderbolt 3 ports, 1 USB 3.0 port and backlit keys. The 4K model lasts 10 hours on a single charge, and the 1080p model lasts for 15 hours.

When Yoga 920 buyers are ready to use the device as a tablet, they simply fold the display back and the system turns off the backlit keyboard. In this mode, they can use Lenovo’s Active Pen 2 stylus to draw or take notes. The display detects 4,096 different levels of pressure from the accessory. Shoppers who buy a model with an Intel Core i7 processor get the pen at no additional charge.

Unlike the Surface Pro or the Miix 520, the Yoga 920 has bronze, copper and platinum color options. Also, Lenovo is planning Star Wars Special Edition Yoga 920 devices with Rebel Alliance or Galactic Empire logos on the front.

Rounding out the company’s new PC options is the Lenovo Yoga 720 with a 12.5-inch display. It’s for shoppers that don’t mind having an older processor for a modest price. This device starts at just $649.99.

Yoga 720 buyers can choose an Intel Core i3, Core i5 or Core i7 processor. These are all 7th Generation Core processors and not the new 8th Generation processors that the other new devices have.

Shoppers can add up to 512GB of solid state storage, but can’t change the 12.5-inch 1080p display that allows it to last 8 hours between charges. Buyers get a standard USB Type-C port, one full-size USB 3.0 port, the Cortana microphone array and the option to buy a Lenovo Active Pen 2 accessory and scribble on the Yoga 720’s display. 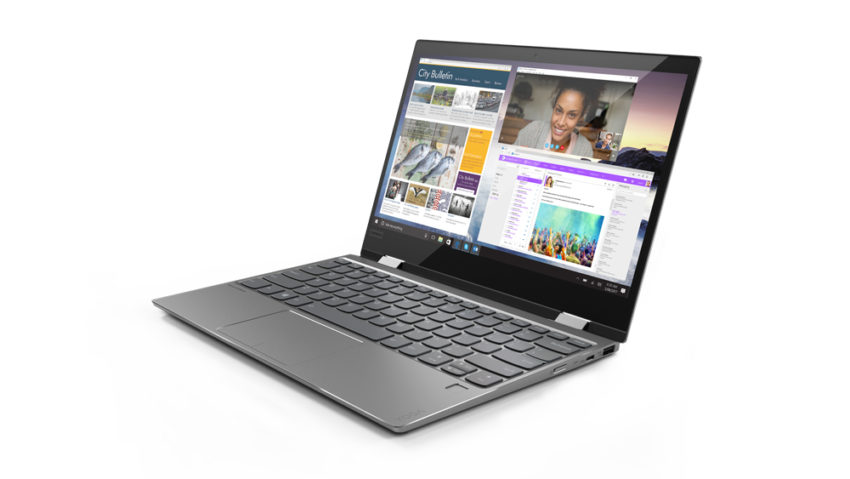 The laptop doesn’t have any Star Wars designs coming, however, it will come in silver, gray and black this October.

All three of these new Windows 2-in-1s can handle the Lenovo Explorer Headset. That’s the official name for the Lenovo Windows 10 virtual reality headset that Lenovo revealed at the CES 2017. Sensors and cameras built into the device allow it to track head movements in games without sensors scattered around the room. It connects to Windows 10 PCs through a HDMI port and a single USB 2.0 port. 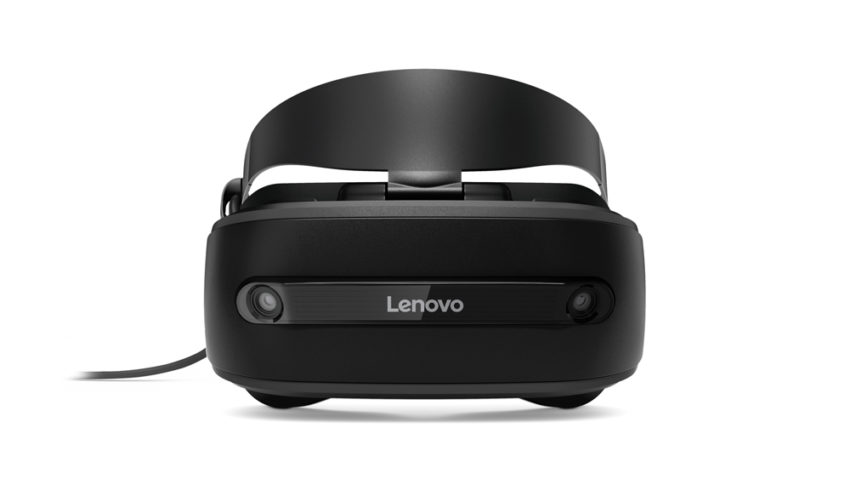 Lenovo is bundling the headset with entertainment software that has 100 classic games already updated for virtual reality and an app that lets buyers replace their desktop monitor with it. The headset will sell with two Microsoft motion controllers for $449 and by itself for $349.

Lenovo is also experimenting with virtual reality in ways besides the Explorer headset. The company’s new Mirage AR headset brings Star Wars and other virtual reality experiences to smartphones. 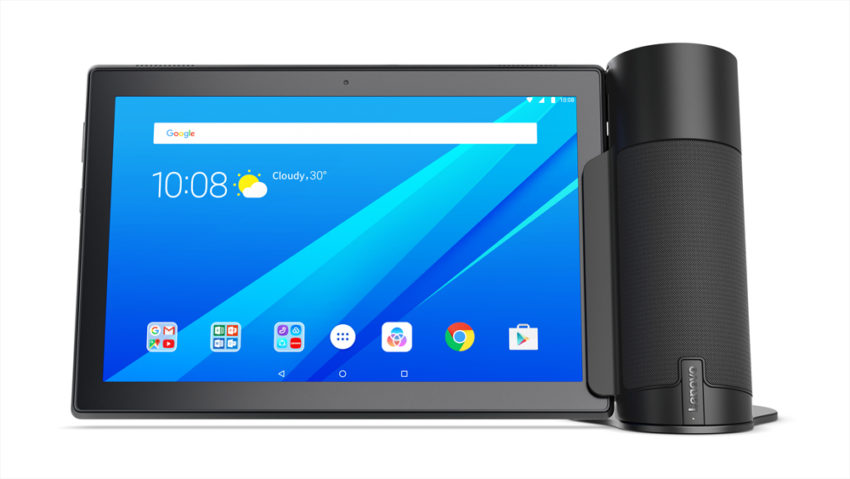 Lastly, there’s the Lenovo Home Assistant Pack. It’s a base station for a Lenovo Tab 4 tablet. Docking the tablet to the Assistant Pack turns it into an Amazon Echo Show alternative, complete with three-watt speaker and microphone array. A home assistant app pulls up the weather and other necessary information on the screen, and Alexa takes voice commands through the accessory.