There are two different Madden 19 editions that you can buy this year. You definitely need to spend time figuring out which Madden 19 to buy since there is a $20 price difference between the two games.

With the more expensive version of Madden 19 you get to play early, unlock bonus items and other epic Madden Ultimate Team bonus items that give you a head start on the competition. Thankfully you can find Madden 19 deals on all version of the game so you can save 10% to 20% on Madden 19 or Madden 19 Hall of Fame Edition.

Here’s how the two editions compare and what you need to know to decide which one you will buy. 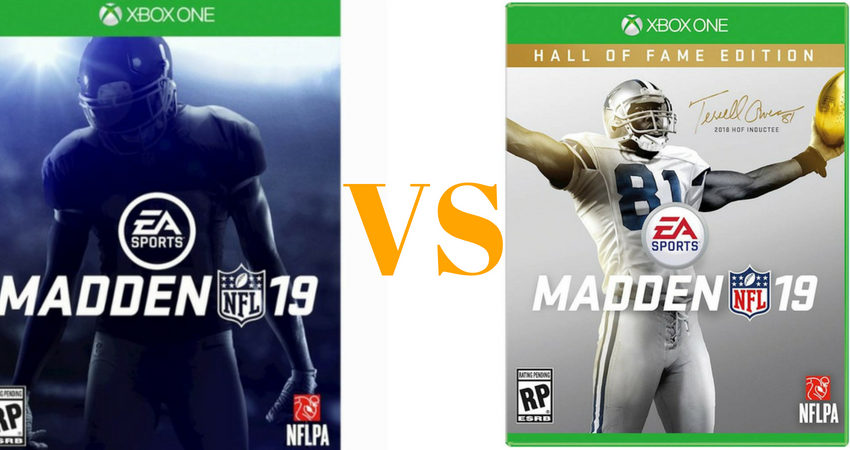 We help you decide which Madden 19 edition to buy.

The Madden 19 release date is August 7th for the Hall of Fame Edition and August 10th for the standard edition. This alone may sway some buyers, but there is more than just early access. If you are on Xbox One, you can play as early as August 2nd, with EA Access. Madden 19 is available for the PS4 and the Xbox One, it also works on the PS4 Pro and Xbox One X, but not on older consoles or the Nintendo Switch.

Madden 19 is available at Best Buy, GameStop and digitally on the Xbox Store and PlayStation Store. It should be available on Amazon soon.

The Madden 19 standard edition is $59.99. This is the base version of the game that arrives on the 10th, and only includes a small number of Ultimate Team bonus items.

You can get this edition for $48 with Amazon Prime and you can get a $10 bonus if you pre-order at Best Buy. With EA Access you can also save 10% on the game digitally on Xbox One.

The Madden 19 standard edition release date is on a Friday, instead of mid-week. You get the base game, 1 elite player from your favorite team and 5 Gold Fantasy Packs.

If you are a casual Madden player who doesn’t go big in Ultimate Team, this is the edition for you. If you are an EA Access player you will get to play on August 2nd anyway, so you won’t have to buy the Hall of Fame Edition to play early. It’s not worth $20 to play early if you won’t use the Ultimate Team items. 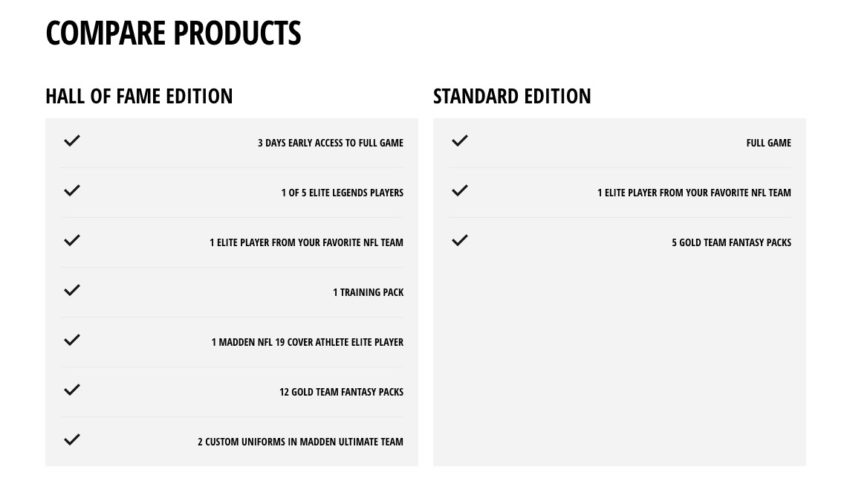 What the difference between Madden 19 editions.

The Madden 19 Hall of Fame Edition is $79.99 on disk or digital. You can up to $16 with various deals and we could see a bigger deal in the fall with a Madden 18 trade in, but expect to pay around $15 more than the standard edition even with deals.

You get the full Madden 19 game, an elite player from your favorite team, an Elite Legends Player, and a lot of other bonus items. You also get to play Madden 19 three days early. Here’s a full look at the bonus items;

That’s a lot of value for a $20 upgrade. If you play Madden Ultimate Team, or you want to play Madden 19 early for Connected Franchise Mode, this is the edition you should plan on buying. 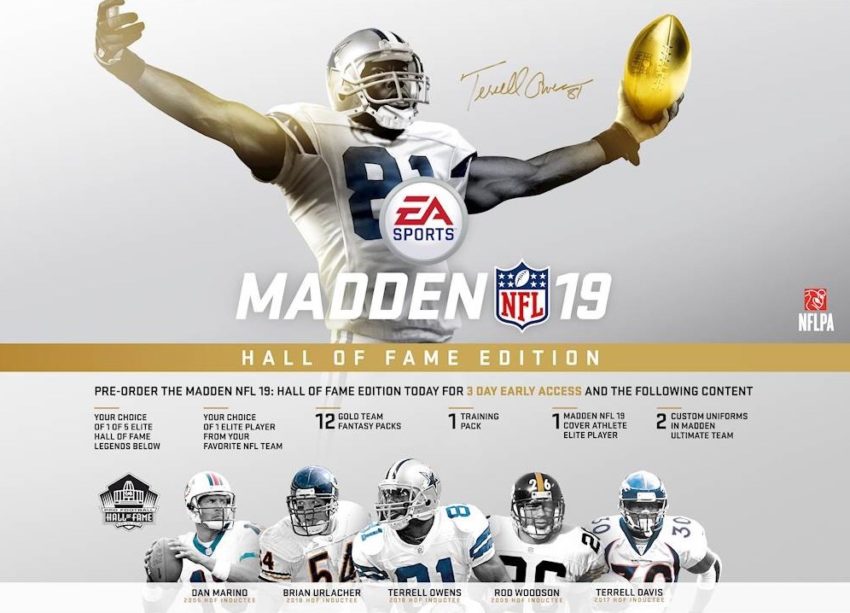 Pick one of the Elite Legends if you get the Hall of Fame Edition.

You can pick from five Elite Legends with this edition. The legends are;

You only get to pick one of these players. There may be a way to buy another Elite Legend in game or through retailers closer to launch, but it will likely cost at least $20.

The price is the same, but you will find more deals on the physical version of the game since retailers want you to come into the store and buy from them. If you buy digitally from a retailer instead of direct from Microsoft or Sony you may not be able to pre-load the game. Ultimately if you want the biggest deals, you will need to buy Madden 19 on disk.

The two main advantages to buying digitally are being able to pre-load the game and not needing to switch disks anytime you want to play Madden 19. I typically buy Madden and FIFA on disk, because there are normally good trade in deals at Best Buy. With the cancellation of Best Buy Gamers Club Unlocked, I may switch to digital this year.