There are three Madden 20 editions available in 2019, with an option to spend up to $100 on the new Madden game if you want a ton of Madden Ultimate Team extras. Read our Madden 20 editions comparison to figure out which one you should buy, and why there is up to a $40 price difference in the options. Thankfully you can pay just about $50 for the base game with Madden 20 deals.

If you choose to spend $20 to $40 more on Madden 20 you can play three days early, get a collection of bonus items and MUT upgrades that give you a chance to get a jump on building up your Madden 20 MUT team.

Madden is getting more expensive, but you can use some of the Madden 20 deals to save on the Superstar and Ultimate Superstar editions. If you’re on the fence, here’s a look at why you should pre-order Madden 20 and you should wait. 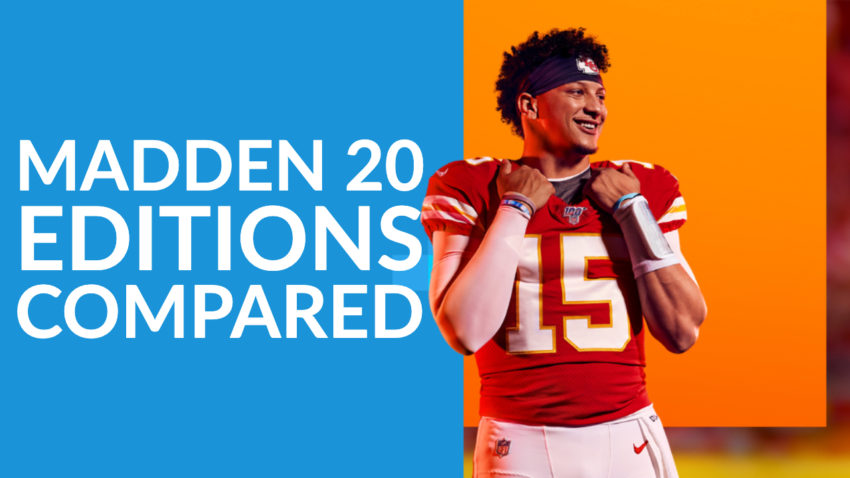 The Madden 20 release date is August 2nd or the standard edition. The Ultimate Superstar and Superstar release date is July 30th. If you join EA Access or Origin Access, you can play five days early, so you may be able to play the full version of Madden NFL 20 on July 25th.

Madden NFL 20 is available for the Xbox One, PS4, and PC. If you play on the PS4 Pro or Xbox One, you will get better graphics, but the same overall features.

You can buy Madden 20 at GameStop, Best Buy, Amazon, Newegg and digitally through Microsoft and Sony.

The table below shows you the main differences between the Madden 20 editions that you can buy. As you can see the biggest differences are early access and how many fantasy packs you get.

Unlike Madden games from a few years ago, you get all the packs at once, which means you don’t have to wait to build up your team. 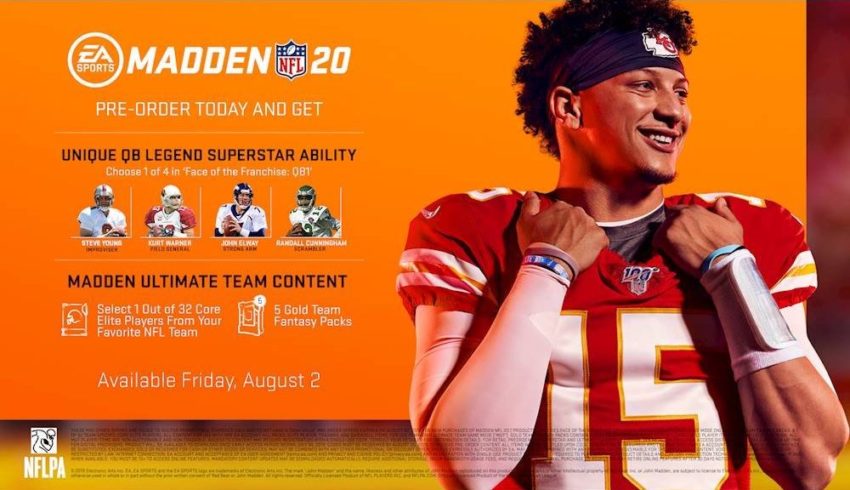 What you get with the standard Madden 20 edition.

The Madden 20 standard edition is the base game with some pre-order bonuses. It is the cheapest option, and it is the best value for gamers who just want to play Madden’s new QB1 mode, the college playoffs, franchise and exhibition matches and who may dabble in Madden Ultimate Team. This edition arrives on August 2nd, so you don’t get to play early, but you still get 5 Gold Team Fantasy Packs and a Superstar ability.

There are no major discounts yet on physical versions, but if you buy this on Origin Access or EA Access on PC and Xbox One, you can save 10% off the purchase price.

If you play Madden 20 casually and you don’t spend much, if any, time in Madden Ultimate Team, you should save the $20 to $40 and go with the standard edition. Playing 3 days early isn’t worth $20.

The base edition of Madden 20 is $59.99 at GameStop, Best Buy, Amazon, Newegg and digitally through Microsoft and Sony. 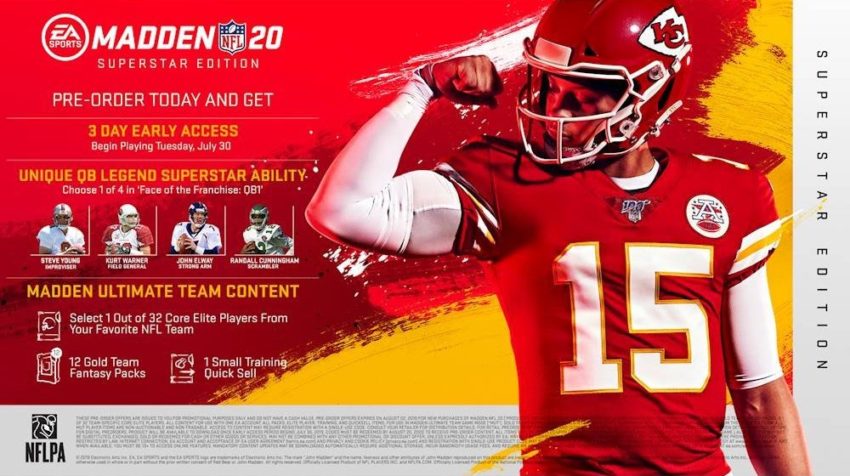 What you get with the standard Madden 20 Superstar edition.

The Madden 20 Superstar edition is the best choice for most Madden Ultimate Team players, but not the only option. With this one, you get a lot of bonus items and can start playing on July 30th. You can save 10% on the digital version of this with EA Access or Origin Access, which is a handy deal.

Read: Is the Madden 20 Superstar Edition Worth Buying?

Here’s what all you get in this version;

This used to be the top-end version of Madden, and it was the easy choice to recommend if you want to play Madden Ultimate Team without spending a ton of cash in-game right away. This lets you start off with a good team and sets you up to conquer some of the missions and challenges more easily than if you bought the standard edition.

If you play MUT, but you don’t want to spend $100 on Madden NFL 20, this is the edition for you. This is also the only special edition that you can buy on a disk.

The Superstar edition of Madden 20 is $79.99 at GameStop, Best Buy, Amazon, Newegg and digitally through Microsoft and Sony. 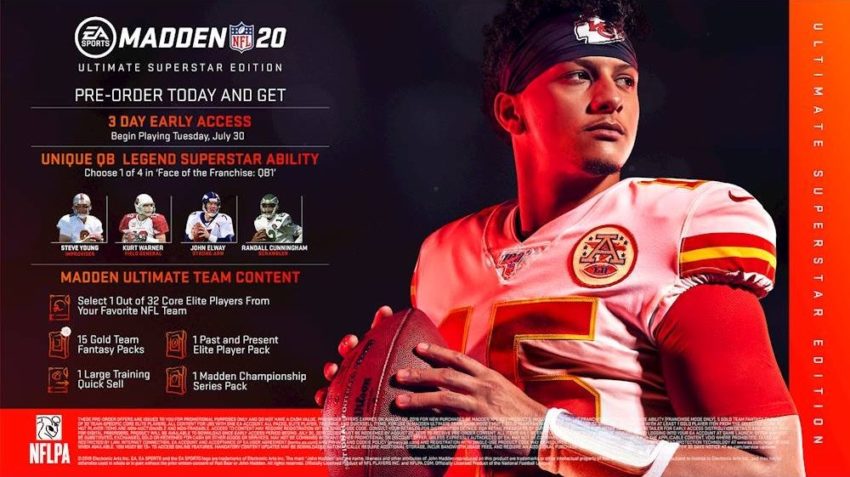 What you get with the standard Madden 20 Ultimate Superstar edition.

The Madden 20 Ultimate Superstar edition is the top of the line option with the most bonus items and it costs $100. The only deal so far is with Origin Access and EA Access taking 10% off, which is a nice discount, but it’s still a $90 copy of Madden.

This edition comes with;

Read: Is the Madden 20 Ultimate Superstar Edition Worth Buying?

This is for diehard MUT players who already planned to drop another $20 or more on MUT packs in the first week. The elite players and Champions will give you an edge in the early days, but keep in mind other players can quickly build up good teams from the base or Superstar editions. This is only a digital version, so if you decide to buy it, you won’t be able to trade it in later.

The Ultimate Superstar edition of Madden 20 is $99.99 at GameStop, Best Buy, Newegg and digitally through Microsoft and Sony.

The only other option you need to choose is if you are buying the Madden 20 disk or on digital. The $60 and $80 editions are available on both and the $100 version is digital-only.

If you choose a disk, you can easily let a friend borrow the game and you can also trade it in later. If you go digital that means no switching disks to play and no need to wait for the game to install on day one since you can pre-load and start playing as soon as the game is live.

We saw some trade-in promos at Best Buy last year that bumped the value of Madden 18 up to about $20 when you traded in and bought Madden 19, but it wasn’t as big of a deal as in previous years. It’s not clear if this deal will return, and frankly, we wouldn’t count on seeing it for Madden 20 next year.

If you like to have a disk, buy it on a disk, but we’re moving most of our purchases to digital this year at Gotta Be Mobile, and it may be time for you to do the same.