The 2019 Toyota Avalon is a massive upgrade for the refined bigger brother of the Toyota Camry. The 2019 Avalon is also the first Toyota to support Apple CarPlay, which is huge news.

During the 2018 Detroit Auto Show Toyota unveiled the new Avalon with a focus on a premium ride and style and a new Entune 3.0 system that supports Apple CarPlay. This is important because Toyota previously stuck with their Entune system and did not support CarPlay or Android Auto. With the new Avalon, all trim levels will include Apple CarPlay support, but there is no mention of Android Auto. Avalon’s 9-inch touch screen also comes with upgraded tech so you can touch it, pinch to zoom and control it just like you would a smartphone. 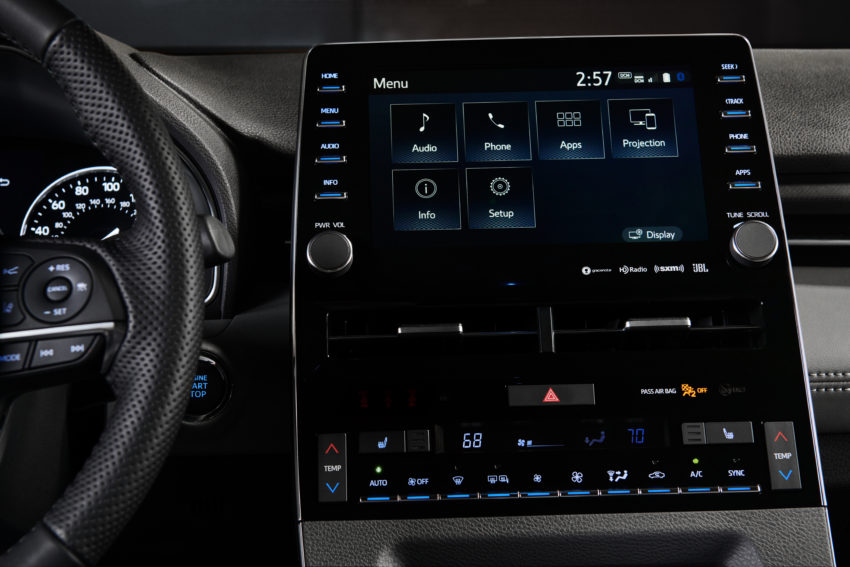 The 2019 Toyota Avalon is the first Toyota vehicle with Apple CarPlay support.

Toyota did not mention any kind of Toyota Entune update to add CarPlay to the Camry and other vehicles. While it is possible that we will learn more about a CarPlay update for the Camry, Tacoma and other vehicles, this may be a feature that only comes to 2019 and newer Toyotas. CarPlay is a feature we think should be available on all new cars in 2019, along with many others on our list of must have car features.

In addition to adding CarPlay to the 2019 Avalon, Toyota also includes smartwatch and Amazon Alexa integrations so you can lock or unlock doors, start the engine or check the fuel level using your voice to check with Alexa or by using an app on your smart watch. Remote Connect comes with a six month trial, and will require a paid subscription to use the watch controls or Alexa controls. Unlike BMW, there is no annual fee to use Apple CarPlay.

The new Entune 3.0 system includes a WiFi connect system that is powered by Verizon so you can connect devices to your car’s hotspot. There is a 2GB, 6 month trial included and after that you can subscribe to a plan that meets your needs.

For sound, the entry-level comes with eight speakers, but there is a 14-speaker, 1200-watt, 7.1-channel surround system that Toyota says engineers built after benchmarking vehicles two classes above the Avalon so that owners get premium audio not typically found in this class. Combine this with CarPlay and the new noise reduction measures and you should be in for a ride that is as quiet as you want or as loud as your musical tastes demand.

The 2019 Avalon is assembled in Kentucky and will go on sale later this year. There is no specific pricing for the 2019 Avalon, but expect it to be similar to the outgoing model. It’s unclear if the newfound support for this feature will result in a Lexus CarPlay announcement this year.

You Need These 10 Must Have Car Features: Find Out Why
Related Topics:2019 Avalon2019 Toyota AvalonAppleApple CarPlayAvalonCarPlayTechnologyToyotaToyota Avalon