The 2019 Ford Ranger marks the return of the midsize pickup to the U.S. market. Shoppers looking for a smaller pickup than the 2018 Ford F-150 may want to wait for this new Ford pickup.

Sold for years in other countries, Ford is finally brining the Ranger back to the U.S. and it is being produced in Michigan.

Before you buy the Ford F-150 or opt for the Nissan Frontier or Toyota Tacoma, this is what you need to know about the 2019 Ford Ranger. 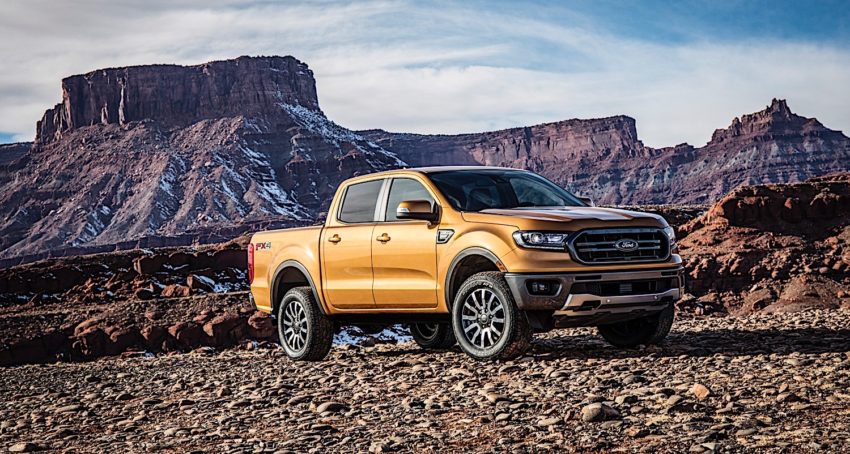 The 2019 Ford Ranger is a midsize pickup that is making a comeback in the U.S. after a lengthy period of sitting out. Ford stopped selling the Ranger in 2011 in the U.S., but continued to sell versions internationally.

Although not as small as the original Ranger, this mid-size pickup is much smaller than the Ford F-150.

The 2019 Ford Ranger specs and horsepower are still mostly under wraps, but we do know some of the details. We should learn about the 2019 Ranger horsepower and fuel economy in the near future.

Ford is packing the 2.3L EcoBoost engine in the Ranger with a twin scroll turbocharger and 16 valve design.

“Ranger’s proven 2.3-liter EcoBoost provides a torque target on par with competing V6 engines, but with the efficiency of a four-cylinder,” said Hau Thai-Tang, Ford executive vice president, Product Development and Purchasing. “When you pair that with its 10-speed transmission, you’ve got one of the most versatile, powerful and efficient powertrains in the segment.”

Expect to learn more about the 2019 Ford Ranger towing, fuel economy and horsepower later this year.

There are three 2019 Ranger trim levels, two cab configurations and multiple appearance and off road packages.

The new Ranger available in SuperCab or SuperCrew cab versions. The Ranger SuperCab comes with a 6-foot carbo box and the SuperCrew with a 5-foot cargo box. Buyers can choose from Chrome and Sport appearance packages and a FX Off Road package.

What you need to know about the 2019 ranger off-road specs.

Overall Ford is making the 2019 Ranger to handle off road driving. Ford did not share exact specs, but states the Ranger prioritizes ground clearance to help clear obstacles.

If you opt for the FX4 Off Road Package you get off road shocks, all terrain tires, frame-mounted heavy-gauge steel front bash plate, frame-mounted skid plates and FX4 badges.

Ford includes a new Terrain Management System that is similar to the one we tested in the Raptor. This system can switch between normal; grass, gravel and snow; mud and ruts; and sand on the fly to change the throttle responsiveness and the traction.

You’ll also find the all-new Trail Control technology that controls the acceleration and braking to each wheel to deliver better control and allow you to focus on steering. This is essentially off-road cruise control and it’s a feature we are looking forward to testing.

The 2019 Ford Ranger release date is not confirmed for a specific date, but production starts later this year. With that in mind we should see the 2019 Ranger arrive in dealers in late 2018. 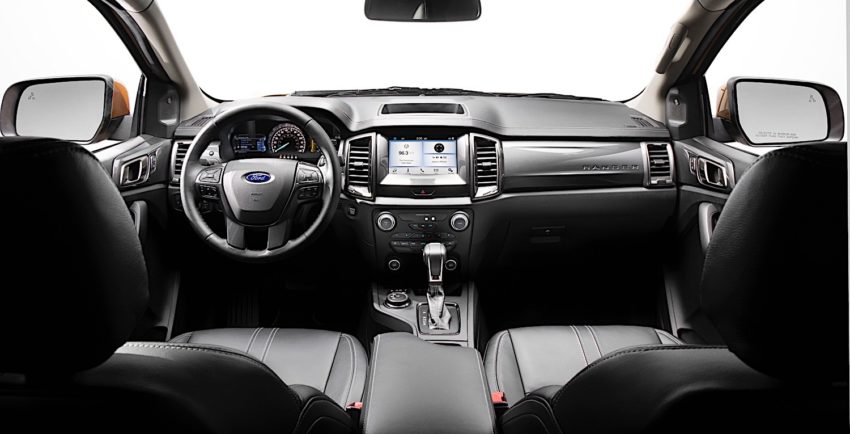 Sync 3 and loads of convenience and safety features are packed into the 2019 Ranger.

The new Ford Ranger includes a lot of tech features that drivers will appreciate on and off road. You get standard Automatic Emergency Braking, while Lane Keeping Assist, Lane Departure Warning and a Reverse Sensing System.

Like the F-150, the Blind Spot Information System covers the Ranger and the trailer you are hauling. This is standard on XLT and Lariat trim levels. The Lariat trim level also includes Pedestrian Detection and Adaptive Cruise Control.

Sync 3 is the center of your infotainment system in the 2019 Ranger, with support for Apple CarPlay and Android Auto. You also get Alexa in the car and an optional FordPass Connect 4G LTE connection that can connect up to 10 devices.

Available AC power can keep your laptop or other devices powered and the B&O sound system should keep you entertained on the road.

There is no 2019 Ford Ranger Raptor. Ford is not commenting on future products, but we did learn that the Raptor FX4 off road package is even more capable than what’s in a F-150 FX4, so off road enthusiasts will want to pay attention to that trim level instead of hoping for a Raptor.

You Need These 10 Must Have Car Features: Find Out Why
Related Topics:2019 Ford RangerautoFordFord RangerTechnology