Apple’s released a new iOS 16.3 update for iPhone and the software comes with some intriguing enhancements.

iOS 16.3 is the company’s third milestone upgrade for iOS 16. Like its predecessor iOS 16.2, the software delivers new features, bug fixes, and security updates that should improve the iPhone experience.

With that in mind we want to take you through everything you need to know about iOS 16.3, Apple’s latest and greatest iOS 16 update for the iPhone.

In this guide we’ll walk you through iOS 16.3’s features, the firmware’s performance, the current state of iOS 16.3 problems, the iOS 16.3 jailbreak status, and more. We’ll start with some quick thoughts on iOS 16.3’s performance.

If your iPhone is currently running iOS 16.2, you’ll see the smallest iOS 16.3 download size when you go to install the new software in your Settings app. 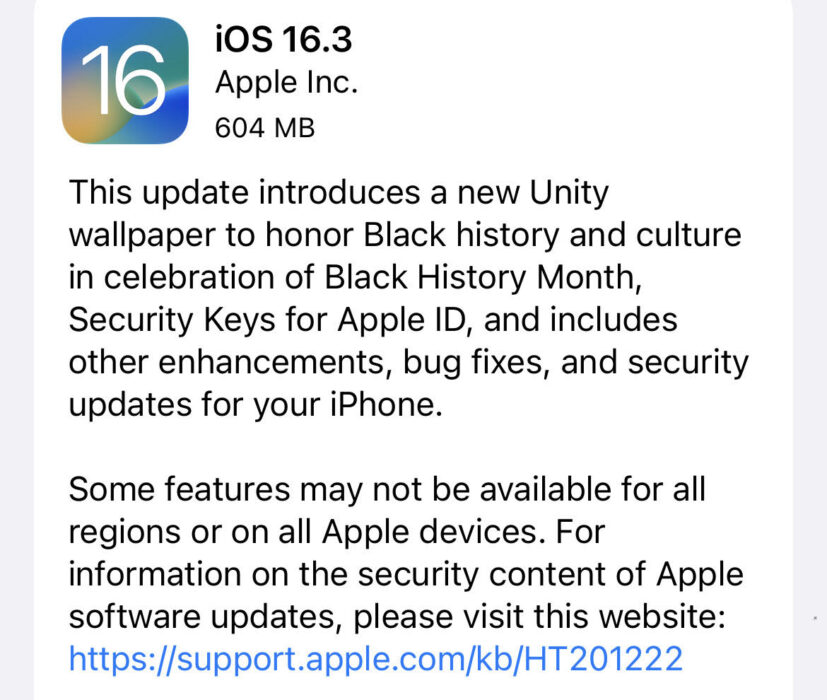 If you’re moving your iPhone up from iOS 16.2, the installation process should take 10 minutes or less to complete. It took about seven minutes to install on an iPhone 12 Pro.

We’ve been using the iOS 16.3 update on an iPhone 12 Pro for a few days now and here’s what we’ve learned about the software’s performance thus far:

If you’ve been dealing with bugs and/or performance issues on iOS 16.2 or an older version of iOS 16, you should probably install the iOS 16.3 update on your iPhone.

If you need help making a decision about an upgrade, check out the best reasons to, and not to, install the iOS 16.3 update on your iPhone right now.

iOS 16.3 is causing problems for some iPhone users. Some of these problems are brand new, others have carried over from older iOS firmware.

Apple stopped signing on iOS 16.2 which means you can’t move your iPhone’s software back to the previous version of iOS 16 in an effort to improve its performance. You can’t downgrade to older versions of iOS either.

Keep this in mind if you’re having a good experience on your current version of iOS. Once you make the move to iOS 16.3, you won’t be able to get back.

The software also brings new security patches to the iPhone and you can read more about those changes over on Apple’s security website.

If you still jailbreak, make sure you avoid the iOS 16.3 update.

Developers have released a new jailbreak that works with iOS 15.0-iOS 16.2. Unfortunately, the jailbreak doesn’t work with iOS 16.3 and it’s only compatible with the iPhone X, iPhone 8, and iPhone 8 Plus.

iOS 16.3 was the last known iOS software upgrade in Apple’s pipeline so it’s unclear when the next version of iOS 16 will roll out to iPhone users.

While unconfirmed, it looks like Apple is testing a new iOS 16.3.1 update for release ahead of the company’s next milestone upgrade.

We suspect Apple will put a new milestone update, dubbed iOS 16.4, into beta testing in the near future so keep an eye out as we cruise through the month.