5 Things to Know About the iPadOS 13.3 Update

The beta is over and Apple’s iPadOS 13.3 update is now available for the iPad, iPad Pro, iPad Air, and iPad mini

iPadOS 13.3 serves as the company’s third milestone upgrade or iPadOS and it brings a collection of new features, fixes, patches, and enhancements to the iPad.

If your iPad is currently running on iPadOS 13.2.3 you’ll see the smallest download size and the shortest list of changes.

With that in mind, we want to guide you through the most important things to know, right now, about the iPadOS 13.3 update.

We’ll start with our quick impressions of iPadOS 13.3’s performance.

If you’re currently running iPadOS 13.2.2 you’re looking at a 300+MB download. The iPadOS 13.3 update is around 363MB download for older iPad Pro models.

If you’re on iPadOS 13.2.3, the iPadOS 13.3 installation should take less than 10 minutes to complete. It took about seven minutes to install on one of our iPad Pros.

For more on the iPadOS 13.3 download and installation, take a look at our guide. 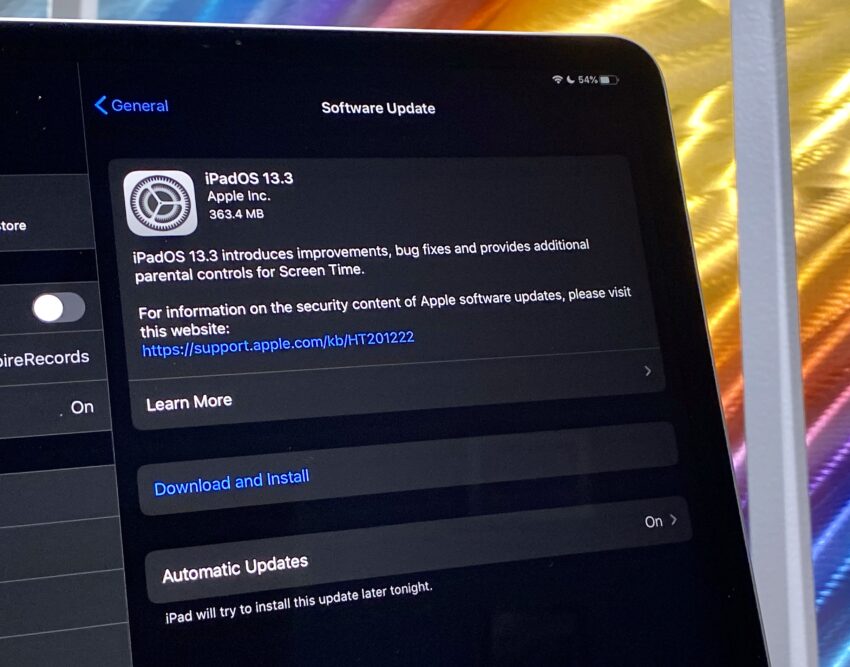 We’ve been using the iPadOS 13.3 update on the iPad Pro for several days and here’s what we’ve discovered thus far:

If you’re dealing with performance issues on iPadOS 13.2.3 or an older version of iPadOS 13, you might want to install iPadOS 13.3 update on your iPad right now.

If you need help making a decision, take a look at our list of reasons to, and not to, install iPadOS 13.3 on your iPad today.

The iPadOS 13.3 update fixes several bugs, but the update has some issues of its own.

If you can’t handle the iPadOS 13.3 update’s performance on your iPad note that you can no longer downgrade back to iPadOS 13.2.3 in an attempt to improve its performance.

That said, if you’re really struggling on iPadOS 13.3, you can try moving your tablet to Apple’s iPadOS 13.3.1 beta though beta software typically isn’t an ideal daily driver.

iPadOS 13.3 comes with a nice mix of features, enhancements, and bug fixes for your iPad. Here’s the update’s full change log:

iPadOS 13.3 also brings new security patches to the iPad and you can read about those on Apple’s security website.

Jailbreak developers have released an iPadOS 13 jailbreak tool and you can learn more about it right here.

The iPadOS 13.3.1 update is confirmed and it’s currently in beta testing ahead of an unknown release date for iPad, iPad Air, iPad mini, and iPad Pro.

The update is a small point release (which means it probably won’t carry new features) and we expect it to fix bugs impacting Apple’s new Screen Time features.

Given the severity of the issue, look for the iPadOS 13.3.1 update to roll out sooner rather than later.