What You Need to Know About Call of Duty: WWII Divisions

When you play Call of Duty: WWII, you will not be making classes in the traditional sense and even perks are getting a change as Sledgehammer Games shakes things up while still taking Call of Duty back to its roots.

Here’s what you need to know about each division. You will need to pick one when you start the game, but the good news is you can pick others as you level up. You aren’t stuck with one division forever.

The right class makes a world of difference in any Call of Duty, and despite the change there is still a lot of customization that you can make to get an edge and to match your playstyle.

What Are Call of Duty: WWII Divisions? 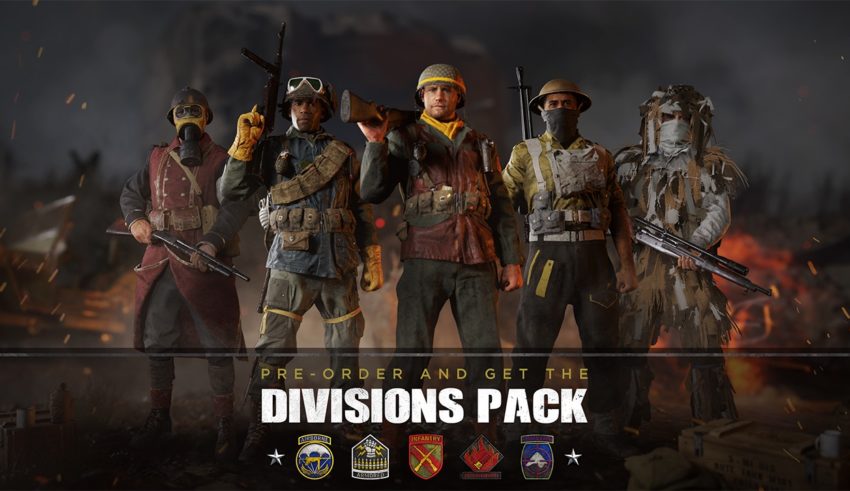 Here’s what you need to know about the Call of Duty: WWII divisions.

Call of Duty: WWII divisions are the new create-a-class for Call Of Duty this year. Instead of starting with a blank slate and building up your class, you will need to choose a division.

It’s a combination of the class selection and the specialists that we’ve seen in Call of Duty: Infinite Warfare and Call of Duty: Black Ops 3.

Each division will match a playstyle best and there are unique training and weapon skills to each of the five divisions.

If you pre-order Call of Duty: WWII you get a Divisions pack that includes Premium Gear sets.

Here’s the explanation of what the Call of Duty: WWII divisions include and how they differ. You will be able to create multiple versions of the divisions, similar to how you could create multiple classes.

You will level up your division separately of your main level to get unlock tokens and other upgrades through Basic Training that will help you get an edge.

This is your rifle corps, you can count on them to deliver accurate shooting that engages the enemy at mid-range or long-range. While you won’t be sniping with this division, it will offer a lot of versatility on larger maps. When you get up close, rely on your bayonet charge. You’ll carry the M1 Garand, a 1911 pistol, and hand grenades.

The division skill is the Suppressor and Division Training of Infantryman III allows you to put two more attachments on the primary weapon and one attachment on the secondary weapon.

Basic training skills include Steady, which makes you immune to shell shock and tacticals and lets you sprint for longer distances. Hunker shows enemy equipment and you will take less explosives damage.

You get a bayonet charge with this devision.

The Expeditionary Division is your go-to team for Close Quarters Combat. This “class” comes with shotguns and has access to incendiary rounds that can do a lot of damage. You can see them in use in the official Call of Duty: WWII multiplayer trailer.

The Division Skill is the fire throwing shotgun shell, and division training adds extra magazines, makes you immune to shell shock and tactical equipment and you take less damage. Basic training skills include Ordinance which makes score streaks cost less and adds the ability to re-roll care packages or Duelist which lets you put two attachments on a secondary weapon.

Is your go-to weapon an SMG? If so, you’ll want to work with the Airborne Division. This group of paratroopers is fast and quiet. You’ll carry your SMG into battle, and when you need to, equip a silencer to avoid detection. You’ll also carry smoke grenades.

The Division Skill is a Suppressor that prevents you from appearing on the minimap but reduces the range of the weapon. Division Training delivers the ability to sprint for longer distances, lets you sprint faster and climb over obstacles faster. Basic training skills include Smoked, which lets you carry an extra lethal and adds smoke grenades to your loadout. Phantom offers quieter movement, no fall damage and you are invisible to enemy recon aircraft.

This is the only division with a silencer.

The Mountain Division is where you’ll look for snipers. This Canadian division of sharp shooters rely on the M1903 Rifle sniper rifle that is accurate to 1,000 meters. You’ll also carry the Bouncing Betty, a lethal trip mine that will decimate the enemy.

The Sharpshooter division skill allows you to block out your surroundings, get some aim assist and see enemy names. The Division training of Scout III lets you pick up enemy names farther out, see more on the minimap and remain hidden to player controlled streaks.

Basic training skills include Undercover, which lets you kill without the enemy death locations showing up and to not show up with a name or reticle color change when targeted by the enemy. The Forage skill lets you swap weapons faster, throw equipment faster and resupply ammo and equipment from the dead.

You can even prevent someone from sneaking up on you with a bouncing betty mine.

Firepower and explosives make up your mission while with the armored division. You will rely on explosives and light machine guns. You’ll be carrying a LMG and the M1 Bazooka as your secondary. You’ll also carry a sticky bomb that can take out tanks.

The division skill is Bipod, which lets you mount your machine gun to protect territory. You can mount on ledges or while prone for less recoil and better accuracy. The Tanker III division training lets you carry the rocket launcher as a secondary, take an extra piece of equipment and throw equipment faster and farther while sprinting.

Basic training skills include Loaded, which adds extra magazines and lets you swap them faster and Scoped which lets you move faster while aiming down sites and adds an extra attachment to the primary weapon.

While you cannot create a class from scratch in Call of Duty: WWII, you will still be able to customize your class using the different training options and skills that substitute in for perks.

Finding the right mix of skills and training, plus picking the right weapon attachments will allow you to match your playstyle and the objectives that you are playing for.

As we see in some early screenshots you can set up multiple division load outs, so that you’ll basically get access to a variety of classes.