In the March Clash Royale update the developers added a brand new game mode called Clan Battles or 2v2 mode. With four people playing at once it’s extremely exciting and addicting, but also pretty hard. The entire month of July is featuring 2v2, and with that in mind here are some 2v2 decks, tips, and tricks to help you win.

Now that 2v2 is an option for the entire month most players are looking for tips to improve their gameplay. Having 16 troops on each side is mayhem, and you’ll want to know what to do and have synergy with your teammate for the best chance of winning.

The biggest mistake I see is players are too aggressive, knowing that Elixir regenerates twice as fast and they have a teammate to bail them out if they push too hard. That simply isn’t the case though, and normal strategy and battle fundamentals still apply to 2v2. Here is more information on the chest rewards, tips, and some crazy Clan Battle decks worth trying. 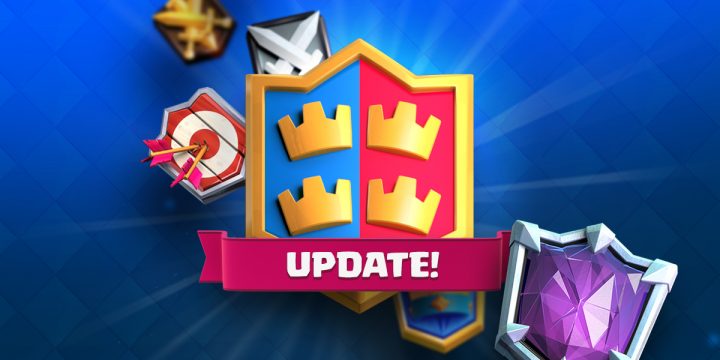 For starters, the rewards from participating in 2v2 changed completely. The first time around almost everyone fully completed the challenge, often in the first day. We don’t get a Clan Battle chest now, and instead, it acts as a regular battle with random chest rewards.

However, throughout the month different 2v2 modes will arrive that offer more prizes, chests, and special challenges. My favorite is the 2v2 Draft Challenge.

As you probably know, Clan Battles and 2v2 are insane. You get double the elixir and troops because two people are playing on each side. As a result, we’re seeing people try to win too fast and put themselves in a poor position for the rest of the battle.

Use a little strategy, think about what you’re doing, and watch your clan-mate as the game progresses. Using a strategy to build both decks will help you win more battles too.

I’ve found that fast bait or swarm decks aren’t too viable in 2v2 unless your teammate has bigger troops. There are too many logs, spells or easy ways to counter a swarm deck or skeleton army.

Of course, it all comes down to how well you play, communicate, and if you have a good defense. Playing defense and earning an Elixir advantage while turning it into a strong offense is key.

One of the best aspects of Clash Royale is the variety available. With over 70 different troops or spells in the game, there’s no wrong way to play. That being said, some decks or troops simply work better than others. Especially in Clan Battles. A prime example is Sparky. One can get lucky using it, but with two players on the other side of the Arena most likely it will be very easy to stop.

Some decks will work better than others depending on who you play, and their counters, but some just generally work great. My main deck is a Lava Hound Balloon deck with a clone spell. My clan mate has arrows and freeze, which has delivered countless 3-crown wins. Or should I say 4-crown wins? 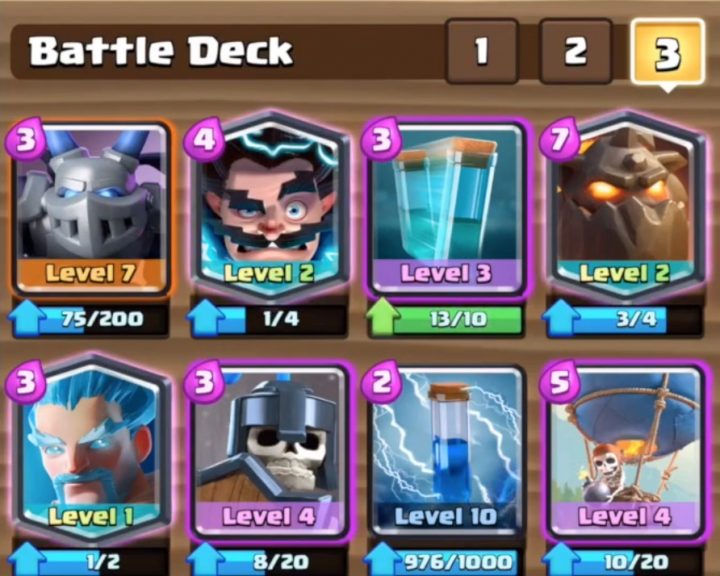 In Clan Battles, almost everyone I’ve faced plans their strategy around winning with offense, and most don’t have a defense. If so, it’s a cannon or Tombstone, which simply isn’t enough to stop a Lava-loon attack. Add in freeze, and it’s game over.

Play good defense and try to get chip damage and wait for double Elixir. Depending on the flow of the battle you can try a Lava Hound in the back corner, and drop a balloon at the bridge. Thankfully there’s a second player ready in case the opponent pushed the other lane. Most of the time we hide the balloon freeze until double elixir to catch the enemy off-guard.

Shown above is one our most successful Clan Battle decks. I’d also recommend two extremely cheap decks with the two main cards being Elite Barbarians and Inferno Tower. Often dropping four Elite barbs and following them with a log is an instant 1-crown win.

Here’s a video from a popular Clash YouTube personality that went 60-0 in 2v2 mode. Try a few different versions of those decks and see what happens.

Mortar and X-bows are the ultimate troll decks, but in Clan Battles, the Quad Goblin barrel could be the best yet. This is extremely easy to counter and hard to pull off, but when done right it’s an instant 3-crown victory.

Most of the deck doesn’t matter. Just make sure both you and your clan mate have the Goblin Barrel, Mirror and one of you have a clone spell. At 10 elixir (or double) throw four barrels, clone them, and watch the Crown Tower crumble. You don’t even have to try for the other two towers. A freeze isn’t needed either, not to mention most of the time the enemy has a log, so don’t waste a freeze. A Zap won’t kill the goblins, especially the higher level cloned goblins. It’s extremely deadly. 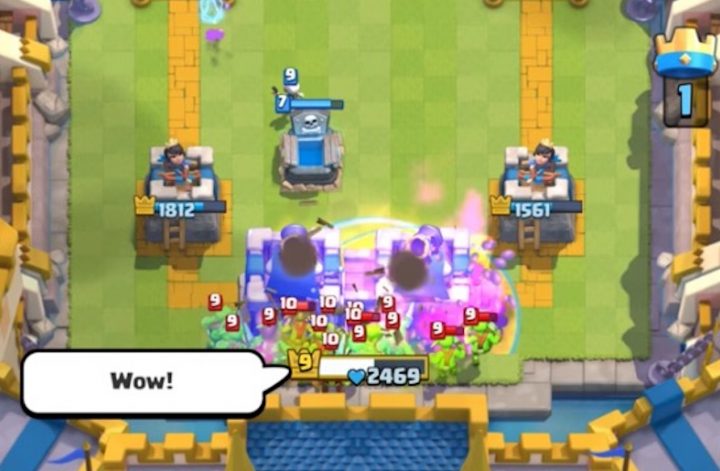 I’ll say it once more. This strategy is extremely easy to counter. However, if they don’t have the right card in the rotation or no quick way to stop the goblins, you will almost instantly win the battle. Bring a Rocket just in case, as most of our quad barrel attacks got the opponent down to around 800 health. A rocket or two and its game over.

Last but not least, and what many should already know, is to bring strong and powerful decks. With Clan Battles there are twice as many troops and double the elixir, so certain cards just don’t do well. Zap bait decks, cheap units, or even the hog rider all struggle. They are too easy to stop. The same goes for our goblin barrel above, although it’s still fun to try.

I’ve been successful saving the Knight and Goblin barrel combo until one tower is gone. Throw the barrel, then at the last-minute drop the Knight in the middle of their base as a tank and to distract troops. If you save it until the end, they aren’t prepared to stop the barrel.

Otherwise, bring a Royal Giant or even the Bowler and Graveyard. Any troop with a lot of health that is hard to deal with are a big help in Clan Battles. 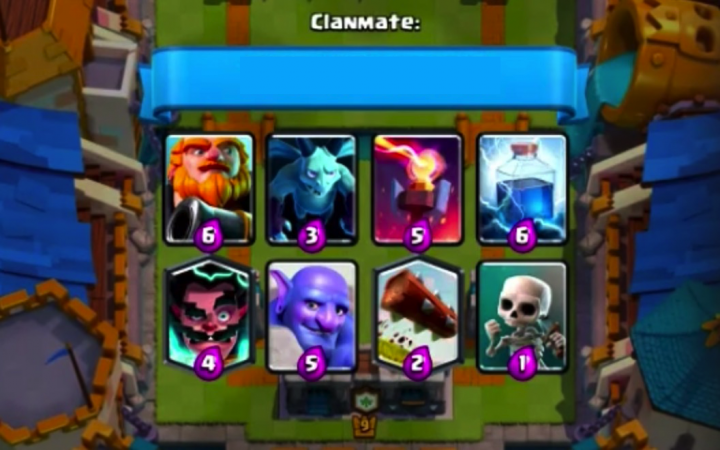 I won a lot using something similar to what’s above, with a few minor adjustments to match my clan mates deck. If something isn’t working right or you both have one of the same card, mix things up. The only troops I think both players should have is the Electro Wizard and spells.

Alternatively, any beatdown Golem deck will be hard to stop. Again, because most players aren’t bringing a strong defense to Clan Battles. Use a Golem, Baby Dragon, 3-Minions or the Mega Minion and a Lightning. Those four cards alone can win almost every battle.

At the end of the day, anything is possible in 2v2, and there are far too many excellent decks to share them all here. I saw two players using Skeleton Army clone in the middle of the base after taking a tower, and it’s almost an instant 3-crown. Because the skeletons split and go for the King Tower and the remaining crown tower at the same time.

We recommend testing out different things, working together and use some sort of communication. If you get absolutely crushed by a deck, copy it and make some adjustments then try it yourself.

It’s all about trial and error, or luck, so have fun with 2v2. This is by far the most fun I’ve had playing Clash Royale over the past year, and I bet it will be for you too. Give our decks a try, especially the Quad Barrel, and enjoy.