Earlier this week Google officially announced and confirmed the highly anticipated Android 5.1 Lollipop update for many key Nexus smartphones and tablets. For now it’s rolling out to the Nexus 5, Nexus 7, and Nexus 10, with the Nexus 6 and more devices set to receive the latest software in the coming days.

Google first released Android 5.0 Lollipop in October, but quickly released both an Android 5.0.1 and 5.0.2 software update aimed at fixing bugs and improving performance, but those didn’t address all users problems. The device plagued with the most issues since the Android 5.0 release is the original Nexus 7 (2012) and below are our thoughts and impressions after the Android 5.1 Lollipop update. This update should address most problems and save the original Nexus 7.

Android 5.1 Lollipop is a major software update to the initial Android 5.0 Lollipop software that arrived back in October, and is set to fix tons of bugs, improve performance and battery life, and is an overall maintenance update that is severely needed following countless complaints on an array of devices. Read on for how Android 5.1 runs on the original (2012) Nexus 7. 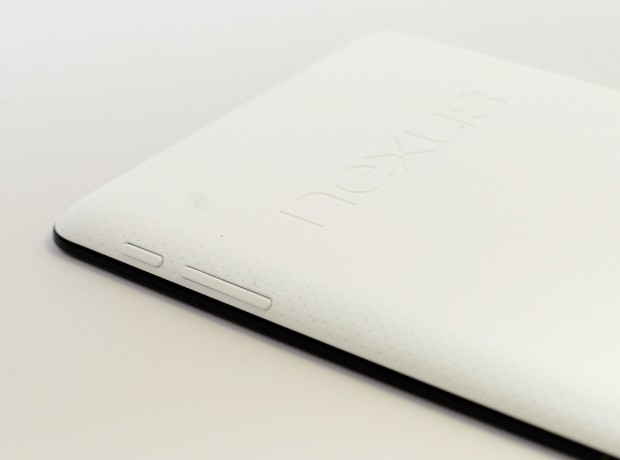 Google’s first tablet, the original Nexus 7, is still kicking and running strong. It has been one of the first devices to receive updates over the past few years, and was the first to Android 5.0, as well as Android 5.0.2 Lollipop. With Google’s latest release Android received a complete visual overhaul with tons of animations, colors, effects, better battery life, notification pulldown bar redesigns and more.

Android 5.0 Lollipop is one of the biggest changes to Android in a long, long time, but sadly it wasn’t a good move for some. The original Nexus 7 has absolutely been plagued with problems since getting Lollipop. Users have flooded our inbox, forums all over the web, Google’s support pages and more expressing frustration over all the problems.

The Android 5.0 Lollipop update for the Nexus 7 made the tablet useless for many owners. Users have called it a paperweight, a dead tablet, a waste of money and more since the update. From freezing, video playback issues, app crashes, poor battery life, charging problems, issues with even installing the update and more. For whatever reason the Nexus 7 (2012) didn’t have a fun time updating to Lollipop, but we have good news.

Android 5.1 Lollipop has saved the original Nexus 7. At least for us.

While Google announced Android 5.1 earlier this week, we’ve yet to see updates arrive through the typical over-the-air update fashion. This is because Google does a very slow, gradual, and staggered rollout to make sure there are no show-stopping bugs in the software release. 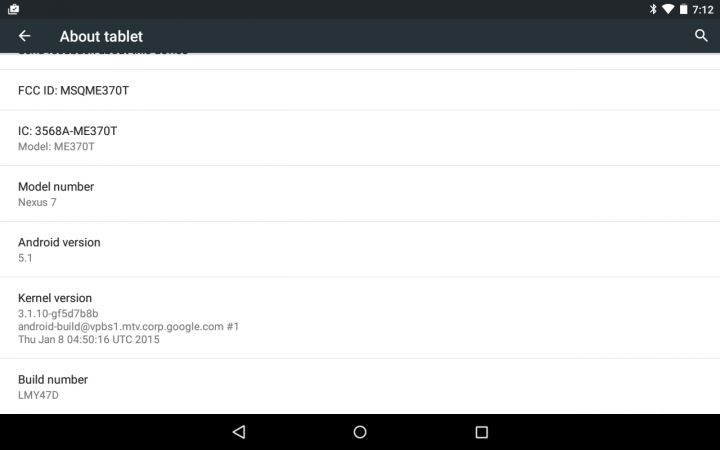 Most of the problems plaguing the Nexus 7 can be solved by doing a factory data reset and wiping all information from the tablet. Essentially giving users a fresh install of Android 5.0.2 Lollipop, but even after that we still saw countless complaints. My own 2012 Nexus 7 was barely usable. There was considerable lag, crashes, freezing, and just general odd behavior. All of which, seems to be gone after the Android 5.1 update, but more on that below.

For now users can expect the Nexus 7 Android 5.1 update to arrive as an OTA update in the next few days, and continue arriving over the next few weeks. If you don’t get it today, or tomorrow, be patient as it will arrive soon enough. That, or flash it manually with the how to we mentioned at the top of the page.

Like many owners, my Nexus 7 was almost unusable after the Android 5.0, Android 5.0.1, and Android 5.0.2 Lollipop updates. It crashed constantly, games would freeze and most wouldn’t even work, we have video playback issues, and battery life took a HUGE hit. These are just a few of the many complaints. It was so bad in fact, that many have sold their devices, I gave mine to a family member, and it was just all around a bad situation.

For whatever reason Lollipop wasn’t playing nice with the Nexus 7, but that’s no longer the case. Yesterday we installed Android 5.1 on the original Nexus 7 and I’ve yet to have a sinlge problem. Not one crash, not one app has froze, and I’ve played back plenty of YouTube video, tried Netflix, and even watched a movie with Sling TV all without issue. It’s safe to say the original 2012 Nexus 7 Android 5.1 Lollipop is essential, and a must download for all owners. This should completely fix most problems.

Using the new Tap N Go Restore function I was able to restore about 60 apps I had downloaded to my original Nexus 7, which took around 15 minutes on Wi-Fi, and I have had a single problem. From playing HD games like Clash of Clans, checking out the latest sports news with Bleacher Report, to watching video on Netflix and Sling TV. Not one problem. This is extremely good news for sad and frustrated owners, and you’ll be happy to know the Nexus 7 should be in much better shape after this update.

In Android 5.0 Lollipop Google confirmed there was a “memory leak” problem that was causing erratic behavior in many apps. Apps would crash, freeze, or just get laggy. This happened extremely quick for some, or would take a few days to finally start happening. A reboot would fix this temporarily, but not for long. As far as we know the memory leak problem was fixed with this update, and from our initial impressions the Nexus 7 on Android 5.1 is running smooth as butter. Yes, it’s finally smooth like it should be. This is a drastic improvement over what we were experiencing with Android 5.0.2 Lollipop.

Connectivity is a major area of concern after any update, especially a large one like this. After installing Android 5.0.1 Lollipop on the Nexus 7 we had Wi-Fi drops constantly. However,  I now can connect to multiple WiFi networks and surf the web without any problem. Bluetooth is also working just as it was before the update, though it was broken for some Android 5.0 users. I connected a pair of Bluetooth headphones without issue, and even tested it with a JAMBOX for good measure. Update without worry. 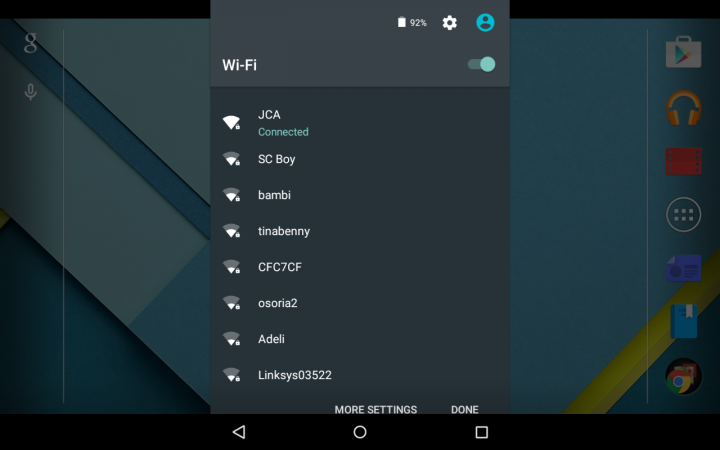 Shown above is one of the many new features of Android 5.1 Lollipop, which is the improved notification pulldown bar. To take things further, Google’s improved the quick settings. Right inside the pulldown bar you can tap the small arrows and switch, search, and connect to Wi-Fi in seconds, rather than fumbling through settings. It’s a nice touch, and is working great here with the orignal Nexus 7.

As we said above, video playback is finally working wonderfully again on the Nexus 7. The original updates killed video playback, caused it to be choppy when it did worked, and borked Google Play Movies and TV. That’s no longer an issue. From Netflix and Sling, to the free Transformers movie currently available on Google Play Movies. They all work great so far.

The original Nexus 7 from 2012 is certainly starting to show its age. With Android 5.1 built for any device, including Android One budget phones for emerging markets, there’s no reason the Nexus 7 and its quad-core processor can’t run it smoothly. We’re happy to confirm that after the Android 5.1 update speed is back to what we expected, and wanted. Everything still runs smoothly including the starting and switching apps. So far overall speed, performance and reliability is great on the original Nexus 7 after updating to Android 5.1 Lollipop.

In short, YES! The initial Android 5.0 Lollipop update caused a lot of problems and left many owners angry and frustrated, but you’ll all be happy to know that the device works much better after this latest update. Sure, there will still be bugs here and there, some may have issues after updating, and we recommend a full wipe and completely fresh install for the best results.

If you are already on Android 5.0 on the Nexus 7, this is an update you should install. It delivers an important bug fix that will keep you from accidentally erasing your Nexus 7 and there are no major known bugs with Android 5.1 so far.

For users still on Android 4.4.4, this is still a hard question. While Android 5.1 Lollipop looks great, performs much better than previous versions of Lollipop, and delivers a new look, it still may not be as smooth as the device was a year ago. Nexus Android 5.0 problems are still floating around, but most have been curbed by the new 5.1 update.

All said and done, we’d recommend all Nexus 7 (2012) owners update to Android 5.1 Lollipop once it becomes available. For more details on what’s new, see our comparison and walk-through below.