In celebration of Star Wars Day on May 4th, May the Fourth Be With You, there is a new Star Wars: The Force Awakens story told using Star Wars Emoji.

You don’t need to buy anything for access to the Star Wars Emoji, and you can send them to anyone.

Here’s a look at the short version of Star Wars The Force Awakens, as told by Star Wars Emoji.

The three-minute Star Wars Video walks through the plot of the movie, but it does a good job of covering up one of the potential spoilers. If you haven’t seen the full movie you can watch this without learning everything that happens, but it will tell you most of the story.

YouTube doesn’t offer an easy download option, but if you want to download the Star Wars Emoji version of Force Awakens you can use a service like Keepvid to save it and then sync it to your kid’s iPhone or iPad so that they can watch it over and over.

You can download the Star Wars Emoji app for your iPhone, iPad or Android and get access to these special emoji on your device. 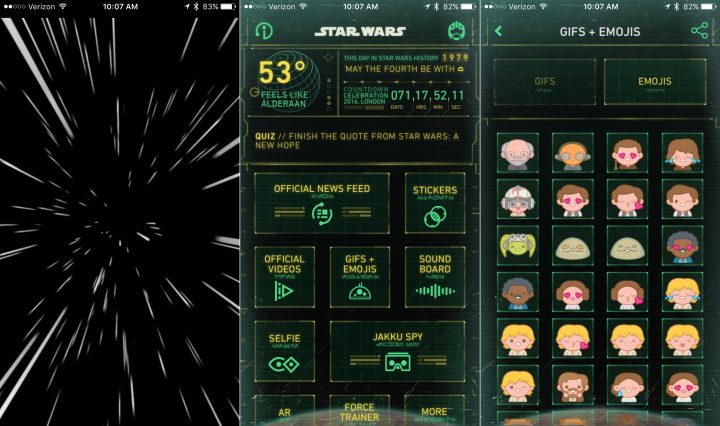 Install the official app for access to Star Wars Emoji.

Unfortunately they don’t have all the same powers that the Star Wars emoji do in the trailer, but you can still send them to your friends.

Other people don’t need the Star Wars emoji app to make use of these emoji since they are sent as a picture and not as an actual emoji.

You need to download the Star Wars app for iPhone or Android to get access. Once you download and install the free Star Wars app, you will want to tap on Emoji and gifs in the middle of the screen. 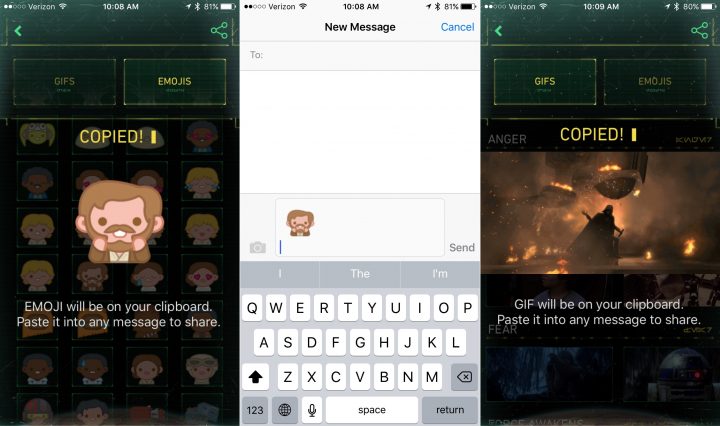 Tap on the Emoji that you want to use and it will copy to your clipboard so you can paste it on Facebook or into a message. You can also tap on Gif to get access to official Star Wars The Force Awakens gifs to paste into messages.

You can only copy one at a time, so you may need to switch back and forth between the app and your message option to send the message you want.

There is no Star Wars Emoji keyboard, so you will need to make do with the copy and past option from the app.