The Xbox One Black Ops 3 beta is finally working after a nearly 24 hour delay that included a series of problems related to the game’s download codes.

As expected, it looks like the Xbox One Black Ops 3 beta is now functioning. We were able to redeem our tokens both online and on the Xbox itself.

We successfully downloaded the Xbox One Black Ops 3 beta in about 30 minutes or so. We downloaded the 13.7GB file over a wired high-speed Wi-Fi internet connection. 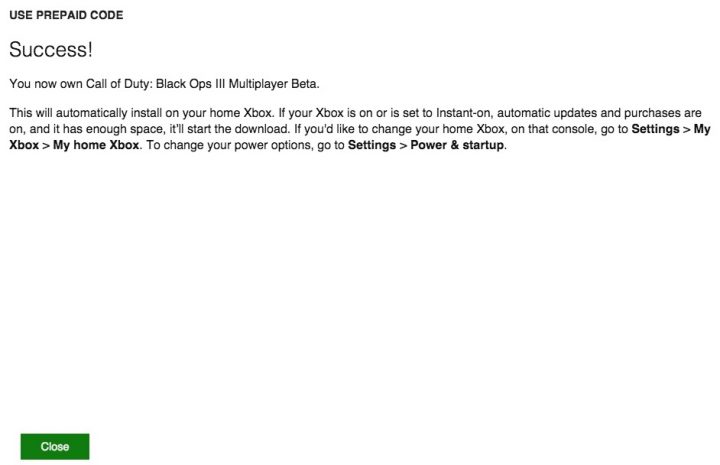 If you’re not at home, you can redeem your code online through Xbox.com and it will start automatically if you have that setting turned on.

The Xbox One Black Ops 3 beta has begun only users have been unable to redeem their beta tokens. These initial Black Ops 3 Beta problems are frustrating those who have been waiting for weeks to play the game.

We’re tracking an issue regarding #BO3Beta codes. We are currently investigating and will let you know more when we can…stand by.

While the company has acknowledged that there is a problem with the Xbox One Black Ops beta codes, it hasn’t detailed when Xbox One users can expect a fix. We’ve been trying to input our Beta Token and our Friends Beta Tokens for the past hour and none of them are working. The Xbox One Black Ops 3 error code looks just like the one below.

@Treyarch I got this error with all three codes. pic.twitter.com/8QFQGmY3ze

@Treyarch Yes please, I keep getting an error from microsoft saying the code can’t be found :/ — OverAbsorb™ Designs (@OverAbsorb) August 26, 2015

@Treyarch good job guys way to drop the ball, I cancelled my order. Get your junk together not like this is the first COD game to come out. — IAmASigEpMan (@HazedRagedSigEp) August 26, 2015

While some Xbox One users are unable to access the beta, it appears that some have had limited success with one user claiming that his download is going to take approximately two hours to complete.

At this point, there doesn’t appear to be a workaround for these frustrating Black Ops 3 problems. In other words, it looks like Xbox One users who took off work to play are going to have to remain patient at Treyarch works through these initial problems with the beta.

Treyarch does say that Microsoft is looking into the Black Ops 3 beta problems but neither company has provided a timeframe for Xbox One users. Those interested in playing tonight will want to keep an eye on Microsoft’s Xbox Status page for real time updates.

We’re aware of the issues you might be seeing with your Black Ops 3 beta codes. We’re looking into it now: https://t.co/PzAdjUFMJj

Installation problems aren’t the only Xbox One Black Ops 3 problems. Others are running into issues finding their Black Ops 3 beta tokens. If you are unable to find your token, check your spam folder in mail.

If you’re still unable to find your token, take a look at our guide that will run you through the steps to take to download the Xbox One Black Ops 3 beta. If none of that helps, contact the retailer that sold you the game.

We also expect to see issues with the game itself. PS4 users dealt with a number of beta issues and we could see some of the same problems hamper the Xbox One beta. Hopefully, they take this guy’s advice and extend the Black Ops 3 beta like they did with the PS4 beta.

@Treyarch make the Beta Longer for this