5 Things to Know About the iPadOS 14.6 Update

iPadOS 14.6 is a milestone upgrade which means it brings a mix of new features, bug fixes, and security patches to iPad models capable of running iPadOS 14.

We’ll start with our early impressions of iPadOS 14.6 update’s performance on iPad Pro.

If your iPad is currently running iPadOS 14.5.1, iPadOS 14.6 requires a fairly large download.

If your tablet is running an older version of iPadOS, your update will likely be bigger. In some cases, a lot bigger. That’s because the features and fixes from iPadOS 14 update(s) you skipped are baked into your iPadOS 14.6 update.

If your device is currently running iPadOS 14.5.1, the installation should take around 10 minutes to complete. It took about eight minutes to install on one of our older iPad Pro models.

For more on the iPadOS 14.6 download and installation, have a look at our guide. 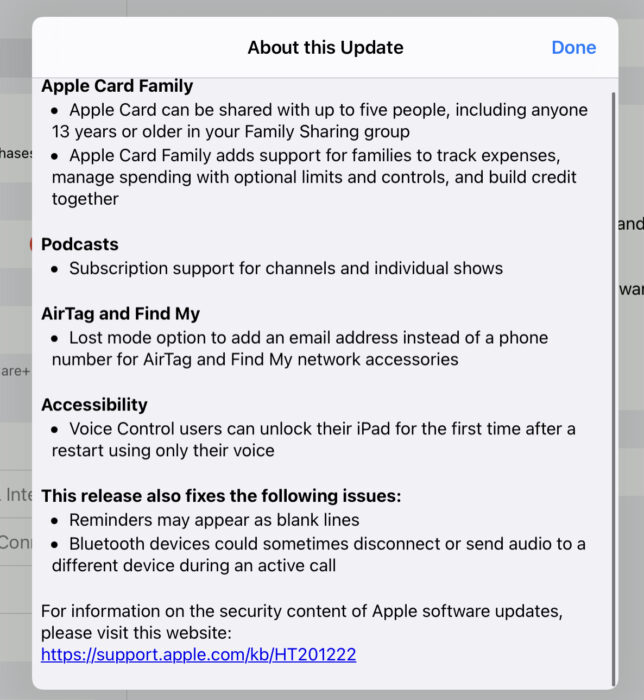 We’ve been using the iPadOS 14.6 update on an iPad Pro for several days now and here’s what we’ve learned about its performance thus far:

If you’ve run into bugs or performance issues on iPadOS 14.5.1, or an older version of iPadOS 14, you should think about installing the iPadOS 14.6 update right now.

If you need help making a decision, take a look at our list of the best reasons to, and not to, install iPadOS 14.6.

If you can’t stand iPadOS 14.6’s performance on your iPad, you no longer have the ability to downgrade it to older iPadOS software.

This means that those of you jumping up from iPadOS 14.5.1 and below should approach iPadOS 14.6 with caution. Once you make the move, there’s no going back.

Apple’s milestone iPadOS updates typically bring a mix of features, security patches, and under-the-hood improvements and that’s what you get from iPadOS 14.6.

While not listed in the update’s change log, iPadOS 14.6 users are saying the update gives Shortcuts a performance boost.

iPadOS 14.6 ties in with Apple’s new Spatial Audio and Lossless Audio features for Apple Music. Those features are due out in June.

The iPadOS 14.6 update also has 30+ new security patches on board. If you want to learn more about those, you’ll find the details right here on Apple’s security site.

The company’s put its iPadOS 14.7 update into beta testing and the pre-release version of the firmware is available to download right now through the company’s beta programs.

Like iPadOS 14.6, iPadOS 14.7 is a milestone upgrade which means it should carry new features, fixes, enhancements, and security patches.

We don’t have an official iPadOS 14.6 release date just yet. As of right now, we expect it to roll out alongside iOS 14.7 sometime in the summer.

The iPadOS 15 release date lands in the fall, but if you don’t want to wait until September, you can download the software on your iPad right now. iPadOS 15 supports all iPadOS 14-powered devices.