After sending testers to 30 major cities in the U.S. and testing in six rural areas PCMag found that Verizon is the fastest mobile network in the U.S. T-mobile is a close second, with AT&T in third and Sprint way out in the back.

Even if you aren’t on the fastest cell phone carrier, speeds overall are up 10Mbps and latency is down, which means better connectivity for everyone. 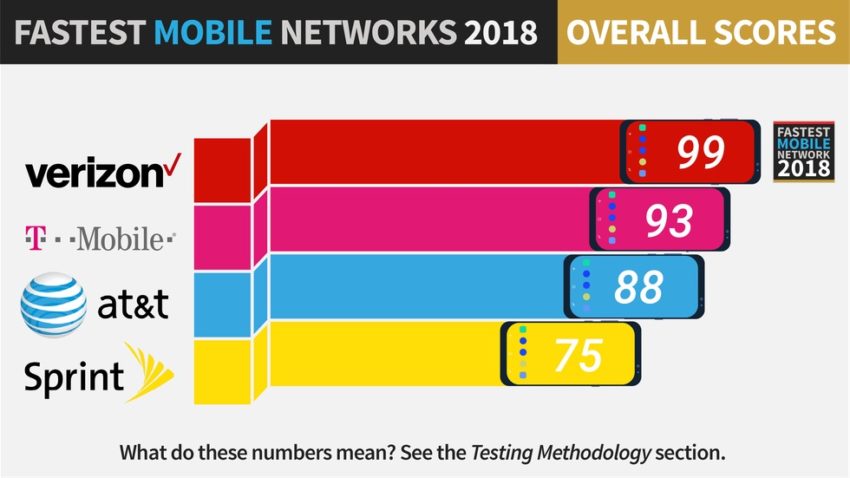 Verizon is the fastest cell phone carrier in 2018.

While the testing focuses on data, this is also a good indication of voice quality since T-Mobile, AT&T and Verizon all use voice calls over LTE when connected to high-speed networks, so you can expect good voice coverage if you can get fast data speeds.

In addition to an overall nationwide winner, the PCMag report breaks down regional winners and winners by city where the testing took place. This makes finding the fastest cell phone network in your area easier.

T-Mobile won the Southeast region, but Verizon won out across the rest of the regions in the U.S., and in 20 of the 36 cities, which is why it is the overall winner.

You can see the results of this testing in detail, including the winners by city. This test is helpful because it focuses on the real world, not a controlled speed in a lab or ideal settings. The test includes reliability, average speeds and other factors to help you make better decisions.

Keep in mind that as you pick a carrier, you may not always get to use the fastest speeds for anything you want. Many of the new carrier plans limit the bandwidth for streaming video, so a super fast download speed won’t always make YouTube or Netflix look better on your phone.