If you’re in the market for a new tablet you’ve got some excellent options. If you’re determined to stick with Android as your operating system, you’ll want to take a look at Samsung’s Galaxy Tab S7 and Galaxy Tab S6. Both of these devices are extremely capable and they’re cheaper than they were when they first launched.

If you think you would be fine with a device outside of Samsung’s Galaxy family, you’ll want to investigate devices like Microsoft’s Surface Pro 7 and Amazon’s Fire HD 10. 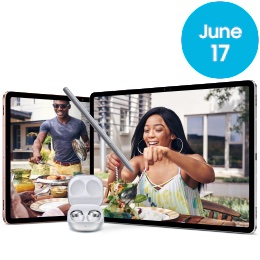 Save $130 on the Galaxy Tab S7 & Free Galaxy Buds Pro at Samsung.com

If you’re on the hunt for a new tablet, but don’t necessarily need to upgrade right now, you should think about waiting for the 2021 crop of devices.

On the Android side of things, we’ve heard Samsung might be working on a new Galaxy Tab S8 flagship. Rumors have been a bit scarce, but here’s what we know.

According to a leak out of Korea, Samsung is working on three versions of the Galaxy Tab S8. The devices are codenamed “Basquait” it seems.

YouTube channel The Galox has released what it claims is early information about the Samsung Galaxy Tab S8. We’re unfamiliar with the source so take the leak with a grain of salt.

Samsung’s also listed a “Galaxy Tab S8 Enterprise Edition” on its website. It’s unclear if this is a typo or an accidental confirmation of an unannounced device. The device in question is listed as having a microSD card slot that supports up to 1TB of storage and a nano SIM card.

It’s worth noting that more well-known leakers like Ice Universe haven’t said a word about the Galaxy Tab S8 series just yet, but that doesn’t rule out a launch.

With a Galaxy Tab S8 release potentially in the cards for 2021, those of you in the hunt for a new tablet have an important decision to make.

While some of you might want to hang around and wait for the Galaxy Tab S8, others are better off going with another Galaxy Tab or a tablet from another family of devices.