iPadOS 13.4 is officially out and iPadOS 13.3.1’s successor brings a long list of changes to the iPad, iPad mini, iPad Air, and iPad Pro.

The iPadOS 13.4 update serves as Apple’s fourth milestone upgrade (x.x) for iPadOS. Apple’s milestone upgrades always bring more than just bug fixes and security patches with them and iOS 13.4 is no different.

With all of that in mind, we want to guide you through the most important things to know right now about the iPadOS 13.4 update.

We’ll start with our quick impressions of iPadOS 13.4’s performance.

If you’re currently running iPadOS 13.3.1, you’re looking at fairly large download. The update is a 800+MB on an older iPad Pro model and it should be around the same for other iPad models.

If you’re on iPadOS 13.3.1, the iPadOS 13.4 installation should take less than 15 minutes to complete. It took about seven minutes to install on one of our iPad Pros.

For more on the iPadOS 13.4 download and installation, take a look at our guide. 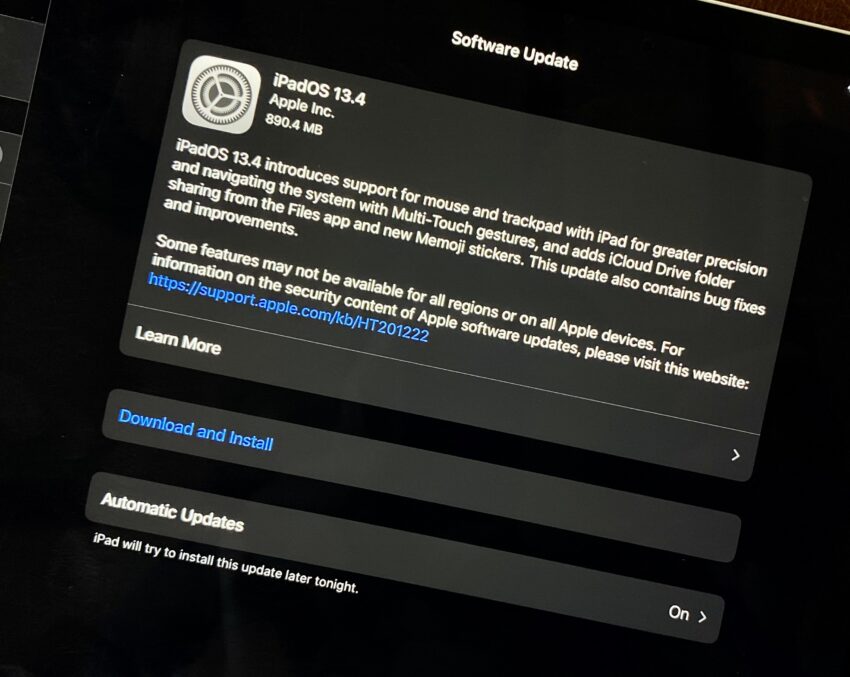 We’ve been using the iPadOS 13.4 update on the iPad Pro for several days now and here’s what we’ve learned thus far:

If you’re dealing with problems on iPadOS 13.3.1 or an older version of iPadOS 13, you might want to install iPadOS 13.4 update right now.

If you need help making a decision, take a look at our list of reasons to, and not to, install iPadOS 13.4.

The iPadOS 13.4 update fixes several bugs, but the update has some issues of its own.

That means those of you jumping up from iPadOS 13.3.1 and below need to approach the iPadOS 13.4 update with caution. Once you make the move, there’s no going back.

That said, if your tablet is really struggling, you can try moving it to the iPadOS 13.4.5 beta.

The iPadOS 13.4 update brings a long list of changes to the iPad line.

The list includes iCloud Folder Sharing (a feature that was originally shown off last year at WWDC), new keyboard shortcuts for Photos, new Animoji and Memoji stickers, and a few other features.

iPadOS 13.4 also bring trackpad support to iPad. And rather than copy the experience straight from macOS, the company is delivering a new experience for iPad users

Trackpad support will be available on any iPad running iPadOS 13.4 and it will work with Apple’s Magic Mouse 2, Magic Trackpad 2 and the Magic Keyboard for iPad Pro. Third-party mice connected over Bluetooth or USB are also supported. 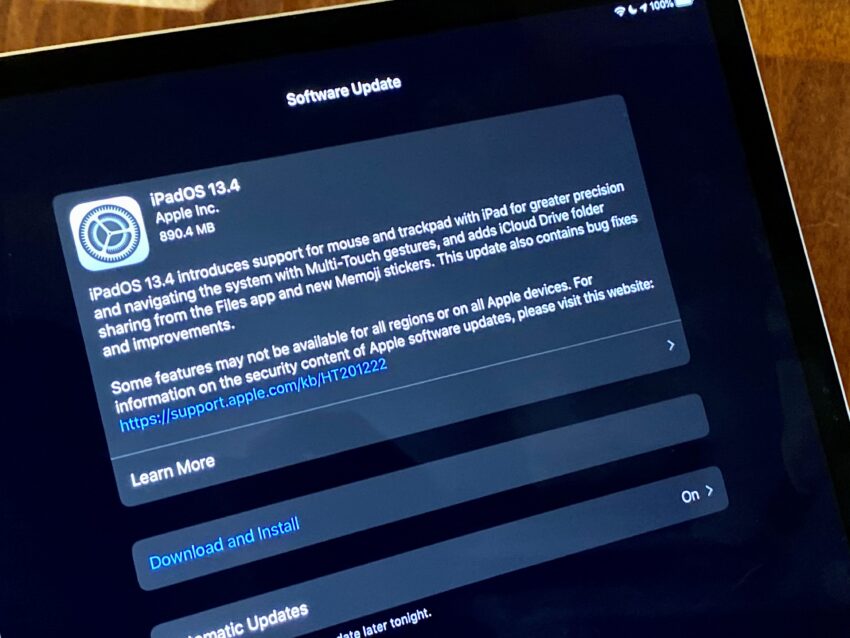 Here’s the full list of changes on board iPadOS 13.4:

iPadOS 13.4 also includes 28 security patches and you can read more about them right here.

The current jailbreak tool supports newer versions of iPadOS 13, but it’s unclear if it supports iPadOS 13.4. We should find out for sure in the near future.

For now, those of you who still jailbreak should avoid upgrading to iPadOS 13.4.

Apple’s pushed iPadOS 13.4.5, a point upgrade, into beta testing ahead of an unknown release date. The update will likely carry bug fixes and security patches for your tablet.

We don’t have a release date to look forward to just yet, but odds are good the software rolls out in April or early May.

Apple’s also hard at work on iPadOS 14 and we expect the company to push the software into beta in June shortly after the conclusion of its WWDC 2020 keynote.

For more on Apple’s new software, take a look at our guide.