If you’re thinking about buying a copy of Battlefield 2042 there are some things you should do before the game arrives later on this month.

It’s one of the most anticipated games of the year and you can buy it right now if you so desire. Retailers are currently taking Battlefield 2042 pre-orders ahead of its release in the fall.

There are three versions of Battlefield 2042 on sale. There’s a standard edition, a Gold edition, and an expensive Ultimate Edition that comes with a bunch of extras.

With pre-orders live and the Battlefield 2042 release date confirmed, you’ll want to start prepping for its arrival. This guide we’ll take you through a few things that will help prospective buyers and those who pre-order.

While you might be tempted to buy Battlefield 2042 right now, there are actually some legit reasons to put your wallet away and wait.

We’ve released a guide that will take you through the best reasons to, and not to, pre-order a copy right now. It’s worth a look if you’re currently on the fence.

Go through our guide, and others if you need to, and decide if the game is worth the investment. Remember, most retailers allow you to cancel a pre-order, free-of-charge, before a game ships.

That said, there are some retailers that will charge you for a game immediately. Sony is one of them. That’s something to think about if you aren’t prepared to cough up the cash right now.

Again, retailers are selling three versions of the Battlefield 2042. And while most people will probably want to go with a standard copy, the Gold and Ultimate Editions do have appeal.

If you aren’t sure which one to buy, take a look at our guide that goes over the Battlefield 2042 editions. It will take you through each and make some recommendations.

As we push through November, make sure you keep an eye on your Battlefield 2042 pre-order. This will help you avoid headaches.

If you’re holding onto an original Xbox One or PlayStation 4, and you own a 4K television, you might want to look into buying an Xbox One X, PS4 Pro, PS5, Xbox Series X, or Xbox Series S.

Battlefield 2042 is coming to older consoles, but there will be some limitations. For instance, while Xbox One and PlayStation 4 support 64 players on a map, 128 players and massive-scale maps will be available on Xbox Series X, Xbox Series S, PC, and PlayStation 5.

If you already have a huge internal and/or external hard drive, you should be good to go. However, if you’re rocking an older console with a limited amount of space, you might want to invest in an external hard drive. Fortunately, you’ve got a lot of options to choose from.

The Samsung T5 Portable SSD is one of our favorites, but you may also want to check out the WD My Passport 4TB.

If you don’t want to pay full price for a copy of Battlefield 2042, make sure you keep your eyes out for deals as we speed toward the release date.

There aren’t a ton of Battlefield 2042 deals out there though EA Play subscribers can knock a bit (10%) off the price of the game right now.

Best Buy provides My Best Buy members with a free steelbook case. Signing up for My Best Buy is free so this is certainly worth a look.

You can also grab a copy of the game for Windows PC if you pickup an SSD from Western Digital. The game comes packaged with the company’s WD_BLACK SN750 SSD.

You can expect retailers to offer sporadic pre-launch deals so make sure you take a look around.

If you pre-order the digital version of Battlefield 2042 you can pre-load the game ahead of its release date. Pre-loading will let you play the game the second it unlocks on November 19th (or earlier if you buy one of the more expensive editions).

Again, Battlefield 2042 will command quite a bit of space on your internal, or external, hard drive.

Make Sure Your PC Can Run It

Before you buy Battlefield 2042 for Windows PC, make sure your computer can run it. 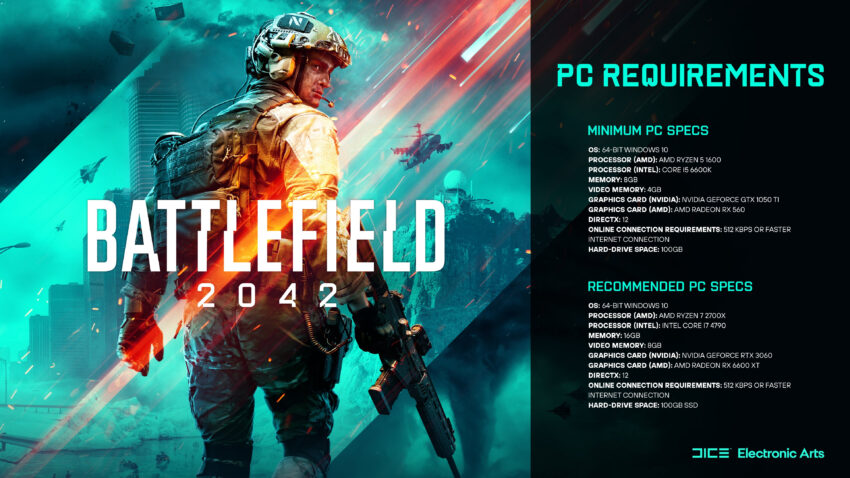 EA’s published the minimum and recommended system requirements. If your PC meets these, the game should run fine. If it doesn’t, it may run poorly. In some cases, it may not run at all.

You don’t need to play older Battlefield games to enjoy Battlefield 2042, but now is a great time to jump into one of the older games if you haven’t played in awhile.

Battlefield 2042 will obviously be a lot different than previous titles, but it will utilize a lot of the core elements Battlefield games are known for.

If you don’t find all-out warfare and objective-based game modes fun, you might want to spend your money elsewhere.