The Elder Scrolls: Blades is Bethesda’s new first person RPG and it’s coming to the iPhone, iPad, and Android later this year. If you don’t want to wait for the official release date you’ll need to sign up for early access.

If you’ve ever wanted to play a high quality, Skyrim-type game on your mobile device, you’ll get the chance this fall. The Elder Scrolls: Blades is Bethesda’s latest entry in the long-running Elder Scrolls series and it puts iPhone, iPad, and Android users inside a massive world with forests and dungeons to explore and cities to build.

The game features the single player storyline you’d expect from an Elder Scrolls game, but it also includes some other elements including PVP arena combat where you’ll take on other mobile players.

All versions of Blades will connect to one another which means those playing the game on an iPhone X will be able to interact with players using an Android device.

Bethesda hasn’t confirmed an official release date, but the game is currently up for pre-order ahead a release sometime later this year. Blades is free so pre-ordering won’t cost you any money.

If you want to be among the first to play The Elder Scrolls: Blades you’ll need to pre-register. Pre-registering only takes a few seconds. Here’s how to do it. 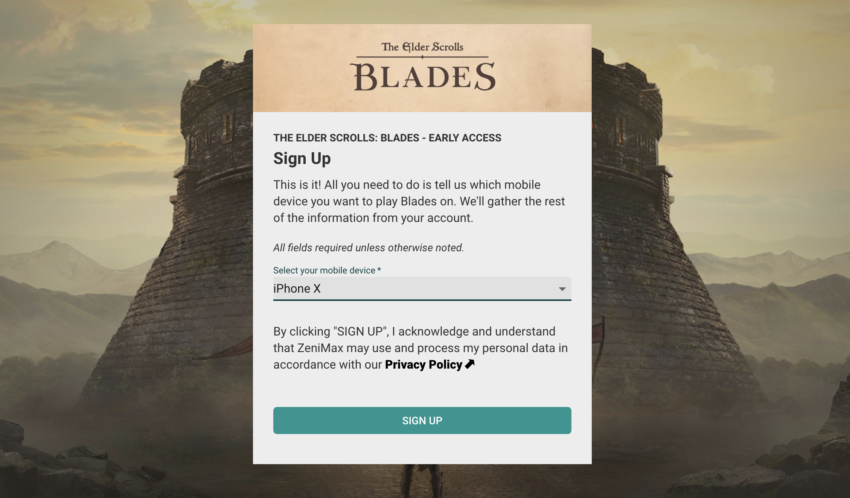 Once you’ve completed this you’ll be pre-registered to play Elder Scrolls: Blades early. Bethesda hasn’t confirmed a date, but says it will get in touch when it’s ready to launch the title.

Unfortunately, Bethesda is no longer offering a sword and helmet bonus to those who pre-register. That offer ended on June 15th.