The iOS 8.1.3 update on the iPad 3 delivers good performance in early testing and the new feature that reduces the storage space needed to upgrade from iOS 7 to iOS 8 may simplify the upgrade process for many users. In this early iOS 8.1.3 review on the iPad 3 we’ll help you decide if you should install the free iOS 8.1.3 update today or stick on iOS 7 or an earlier version of iOS 8.

This early iOS 8.1.3 iPad 3 review comes after spending a few hours testing the software update on the older iPad. Our experience with iOS 8 on the iPad 3 is generally positive and the performance is better than the iPad 2.

The iOS 8.1 iPad 3 update boosted performance, making the old iPad easier to use for common tasks like browsing the web, watching Netflix, using Facebook and sending email. Although my wife is the primary user of this iPad, it is one we share often enough that it is easy to see changes in performance from updates like this.

One of the big reasons some iPad 3 users may look at this early iOS 8.1.3 review is that this update cuts down on the space needed to install updates. If you own a 16GB iPad 3 it is now easier to install updates like iOS 8 or iOS 8.1.3.

Here is an early iOS 8.1.3 on iPad 3 review to help you decide if it is worth installing the iOS 8.1.3 update on your old iPad.

The iOS 8.1.3 update is a decent size so it took about 20 minutes to download. Your speed will vary based on your connection and other factors. I was also updating an iPhone 6 Plus and installing the new OS X 10.10.2 update on two Macs.

After the download the iOS 8.1.3 update installation completed in about 5 minutes, including the reboot. All apps and accounts worked as they had before the installation.

The iPad 3 iOS 8.1.3 performance is good so far, and I will share more details about this update in key areas below. Keep in mind that you likely use different apps than I do, connect to different networks and use your iPad in different ways. This means that there is a chance you may not have the same positive experience that I am on the iPad 3 running iOS 8.1.3. 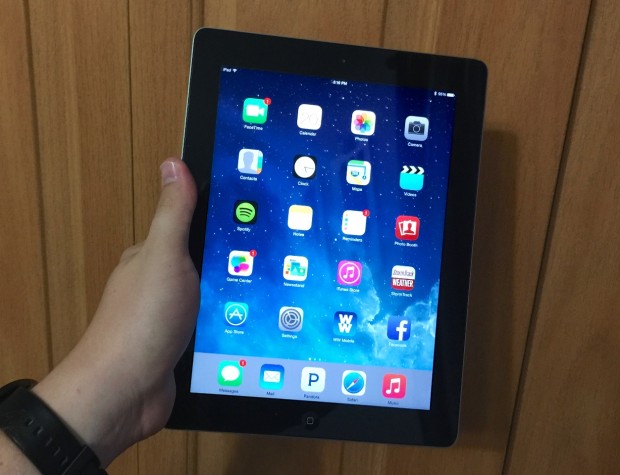 After installing iOS 8.1.3 I was able to open up any app with an account and start using it without the need to re-enter login information. This is expected, but occasionally problems require users re-login.

I tested Facebook, Gmail, Netflix and several other apps on the iPad 3 and all are working just as they were before the upgrade. If you run into issues it is a good idea to make sure your apps are all updated.

After an update and two hours of use testing apps and performance the iPad 3 iOS 8.1.3 battery life looks good. Overall the battery is down just 5% from when we started the update process which means there is not some type of fast drain that indicates a major problem. We’ll test this in more detail over the next week.

Connectivity is an area that updates can break, but so far things are working well. The iPad 3 connected to the Bluetooth keyboard case it sits in right after the iOS 8.1.3 update and there was no need to re-pair it or troubleshoot any problems.

The iPad 3 also connected to my home network and to a personal hotspot on my iPhone 6 Plus without problems. This is not a cellular model, so I could not test that.

At this point there are no iOS 8.1.3 bugs degrading the iPad 3 performance, but it is possible that we will notice them after more use. Small updates and small bugs often escape initial scrutiny and can arrive for a small group of users after a few days. We’ll keep an eye out for these over the next week.

The iPad 3 iOS 8.1.3 update performance is the same as on iOS 8.1 and iOS 8.1.1, which is better than it was on the original iOS 8 release last year. The performance is not as fast as on the iPad Air, but it is still good enough for many users.

If you are already on iOS 8 and you have problems with bugs or performance this looks like a good update to install today. If you are still on iOS 7 and thinking of upgrading to iOS 8.1.3 you should wait a few days. This looks like a great update, but there is no way to downgrade to iOS 7 from iOS 8.1.3. If you upgrade and don’t like the performance you are stuck until Apple releases iOS 8.2 and you will never be able to go back to iOS 7.