If you want to see what’s new in iOS 8 you can see the changes in our iOS 8 vs iOS 7 walkthrough. This is a comparison of iOS 8 and iOS 7 on the iPhone and iPod touch.

This iOS 8 walkthrough shows the new iOS 8 features, small visual changes to the new iOS 8 update. We’ll show you how they compare to the older software you are used to.

The iOS 8 release date arrived on September 17th, and after a rough week of installing iOS 8 the process is simpler now. The iOS 8 update is free and available for the iPhone 4s, iPhone 5, iPhone 5c, iPhone 5, iPad 2, iPad 3, iPad 4, iPad Air, iPad mini, iPad mini Retina and the iPod touch 5th generation. You may not want to update the iPad 2 or iPhone 4s. You will also find iOS 8 on the iPhone 6, but it ships with the phone, not as an update. 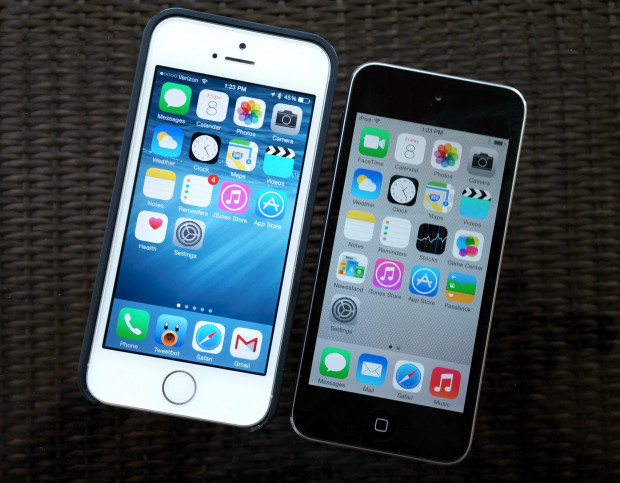 Check out our iOS 8 vs iOS 7 walkthrough to see the new iOS 8 features coming this fall.

You’ll notice in this iOS 8 vs iOS 7 walkthrough that the new iPhone update does not look much different than iOS 7. Apple made big changes to the look and design of iOS 7, and with the iOS 8 release we see enhancements and features added that include small visual changes, but the bulk of the update is focused on adding new features.

After looking through what’s new in iOS 8 you’ll notice that Apple is adding a lot of new iOS 8 features to make messaging better, track your health and manage photos. It’s also very clear that Apple is catching up to Android in some areas with a better keyboard and other changes that former Android users will love.

Read: How to Upgrade to iOS 8

You can click on any of the images below to jump to a specific iOS 8 vs iOS 7 walkthrough slide and see how that section of the software compares. The iOS 8 screenshots are on the left, and iOS 7 on the right.