We’ll walk through everything you get with the Madden 19 Hall of Fame edition and help you decide if it’s worth spending an extra $20 on Madden 19 this year. There is no super-special digital edition, but there is a crazy bundle at GameStop. Here’s a look at why you should pre-order Madden 19 and why you shouldn’t.

Here’s Which Madden 19 Hall of Fame Legend to Pick!

You can buy Madden 19 at Amazon, Best Buy, GameStop and other retailers. The Hall of Fame Edition is available on disk or digitally. 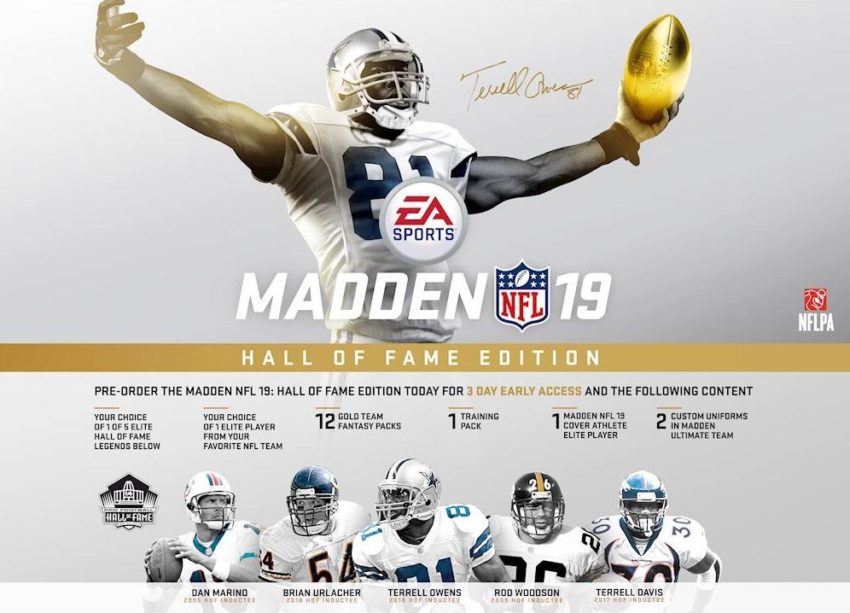 Is the Madden 19 Hall of Fame Edition worth buying? What you need to know.

Madden 19 Hall of Fame is all about those Madden Ultimate Team extras, or MUT bonus items, of which there are many. The real reason to spend the $20 extra on the Madden 19 special edition is to get the most bonus items to start out with a better team. This will help you unlock better players right away, and it will help you complete the challenges easier.

If you don’t play Madden Ultimate Team, do not buy the Madden 19 Hall of Fame Edition. If you do play MUT, here’s what you get;

This is in addition to the 1 Elite player from your favorite NFL team that also comes with the standard edition. You don’t get extra contracts this year.

The Elite Legends players include the following super stars. You can choose one for your team, based on skill, position or sentimental attachment.

The Elite Legend Player is valued at $20 based on the bundle of a Legend and MUT points at GameStop, and then the 12 Gold Team Fantasy Packs are worth 150 points each, or 1,050 points overall. That’s roughly $10 in added value. Factor in a few dollars extra for the Training Pack and the uniforms, and That’s a total value of $35 to $40 for the $20 price increase.

If you plan to spend any time at all in Madden 19 Ultimate Team mode, you should consider spending the extra $20. Check out the best Madden 19 deals to save even more on this.

Most players will want to steer clear of the $129 Madden 19 Bundle that GameStop sells, as it basically includes $40 in Madden 19 points and a Legends upgrade. You may be able to buy the Legends upgrade directly in Madden 19 and many times these players aren’t going to hold value or remain competitive long enough to justify the $60 bundle.