Origin Access Premier is a new game subscription service from EA that is available now on PC, and it adds on to the value of Origin Access. This leapfrogs EA Access in terms of benefits and is not available on the Xbox One. This is similar to the Xbox Game Pass service, but you get EA titles instead of Microsoft Exclusives.

This is a look at what Origin Access Premier includes, how much it costs and other information that you need to know before you subscribe to the new higher tier option from EA. 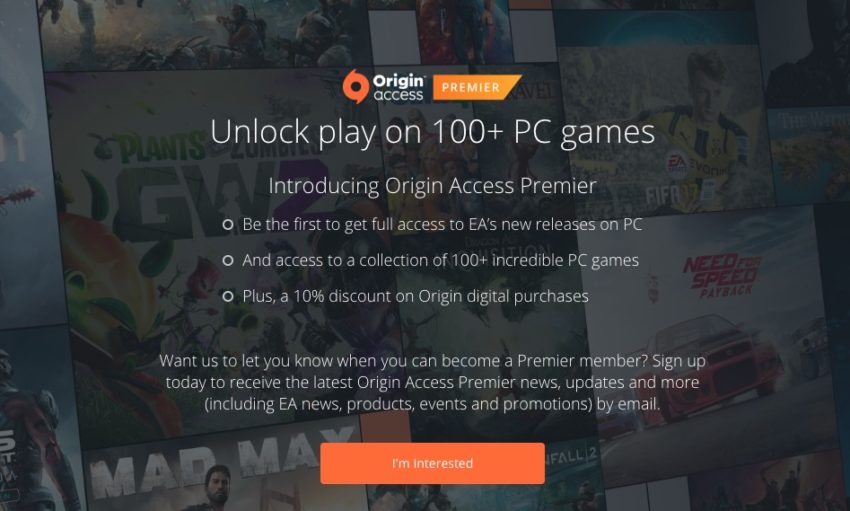 Origin Access Premier is a game subscription service that allows you to play full versions of the latest EA games on PC. This is a new level of Origin Access, and it is more than just a play first trial or access to a library of older games.

You’ll get to play the full versions of the newest EA games before anyone else, and you get to keep playing them well past the 10 hour mark without spending any more money. In addition to the biggest games coming in 2018 from EA, you also get access to over 100 other games from EA and other publishers.

You can sign up for more info, but you can’t start your Origin Access Premier membership until later this year.

Origin Access Premier is $14.99 a month. That’s a big jump up from Origin Access, but you are getting new games as soon as they come out, instead of half a year after the release date.

You can also buy a year of Origin Access Premier for $99.99, which is an astounding price for full access to Madden NFL 19, FIFA 19, Battlefield V and Anthem as well as other games.

The major titles that are part of Origin Access Premier.

There are over 100 games in the Origin Access Premier library, but the biggest draw are the new EA games for 2018 that you get to play first, and you get to play for more than a trial. This includes the following major releases;

This is the first time we’ve seen Madden on PC in a long time. There is some hope that this will bring NHL 19 to PC. NBA Live 19 is announced, but there is no mention of a PC version yet.

On top of these new games, which retail for $240, you get access to the older games that are part of Origin Access. Here’s a list of the full games you can play as part of the Origin Access Vault.

Origin Access is a $5.99 a month or $29.99 a year entry level version of a game subscription from EA. This plan allows you to play new games like the ones above for 10 hours in a trial, and then you can decide if you want to buy them. You can also play the Origin Access Vault games.

The main difference is that with Origin Access Premier you can play the full games with no time limits. If you quit either of the services you can no longer play the games. You get a 10% discount with either service that is good on games and on in game purchases.

This is not a game streaming service. You will need a PC capable of playing these games and you will need to download the game and then play it locally, just like if you bough the game.

You can check the specs to see if your PC is capable of playing these games as you decide if it is worth subscribing. You won’t be able to use just any PC if you want the most for your money as the newer titles will require a decently powerful computer.

If you can’t play the newer games, you may want to look into Origin Access instead of the new premier option.