The first big PS4 Fallout 4 patch is finally here and this roundup takes a look at the most important things you need to know about the update that will appear next time you fire up your PS4 and your copy of Fallout 4.

In November, Bethesda announced that its first Fallout 4 patch was in the works for PC, PS4 and Xbox One. The company confirmed several details including plans to roll out a beta for the PC before pushing it out to everyone that owns a PC, Xbox One or PS4.

Yesterday, the developer took the Fallout 4 1.02 patch out of beta and released it for the PC. As expected, the PC Fallout 4 patch delivered a number of changes including new features and bug fixes for Fallout 4 problems.

Bethesda said that it would release the update for Xbox One and PS4 later this week and today it made good on that promise. 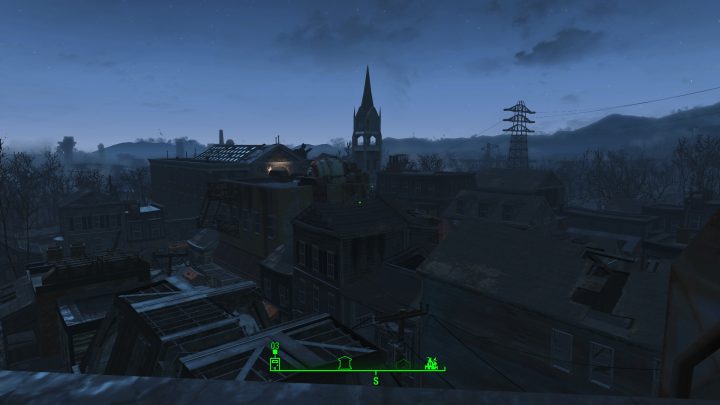 The Fallout 4 patch for PS4 is here. And here’s what Fallout 4 owners need to know about their first major update.

If you’re running out of space on your PS4 or external hard drive, now would be a good time to free up some room.

Bethesda’s first major PS4 Fallout 4 patch is big and checks in at over 500MB in size. If you’ve reached the threshold, you’ll want to delete some files so that you can get the patch downloaded without any headaches. 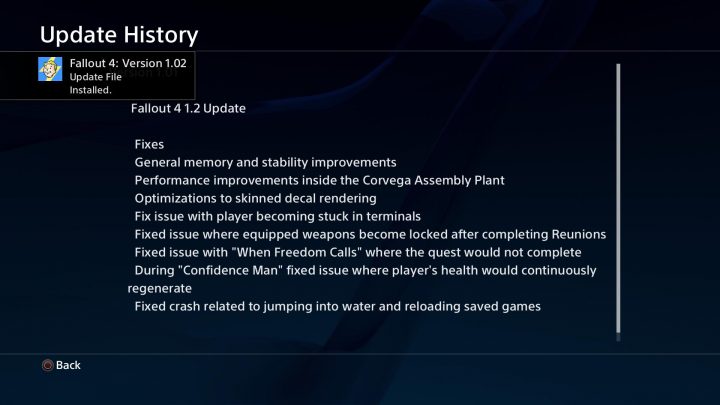 If you aren’t sporting a high-speed connection, you might also want to plug your ethernet cable directly into the PS4 to help with the download speed.

Most of you will be be able to get this Fallout 4 patch downloaded and installed within 10-15 minutes though.

The PS4 Fallout 4 patch is similar to the update that rolled out for PC users yesterday morning.

The PS4 version of the update doesn’t come with new features. Instead, it’s loaded up with bug fixes for ongoing Fallout 4 problems. Here is a rundown of the changes that will be applied after you install the update on your PS4:

PS4 users are hopeful that this update fixes some of the frame rate issues that’ve hampered the game’s performance.

While not listed on the change log, the update is expected to fix the game-breaking Monsignor Plaza problem that PC, Xbox One and PS4 users reported almost immediately after the game’s release on November 10th.

Unfortunately (and unsurprisingly), it looks like the Fallout 4 patch failed to fix every Fallout 4 problem. Gamers are still complaining about a myriad of issues post-patch and it looks like Bethesda still has its work cut out for it.

The company has promised regular updates that feature a mixture of bug fixes and new features but it’s not clear when the company plans to release its next patch for PS4, Xbox One or PC.