Google finally announced a new pair of Pixel Buds at its Pixel 4 launch event last October, but with a Spring 2020 release date. Showcasing a set of sleek completely wireless earbuds with the power of the Google Assistant built-in. If you’re asking yourself should I buy the Airpods Pro, the original Pixel Buds, or wait for the new ones, here’s what you need to know.

If you’re looking for wireless headphones you have no shortage of options. However, Google’s original Buds weren’t truly wireless and Apple’s Airpods don’t play very nice with Android. Which is why the new Pixel Buds 2 are a perfect middle ground.

Google’s current Pixel Buds are a good deal at the lower $99 price point, but we recommend holding off for the 2nd gen model coming out within the next few weeks.

Following nearly two years of rumors and expectations, Google finally revealed its new headphones on October 15th, 2019 at its Pixel 4 launch event. We expected them in 2018 at the Pixel 3 event, but that never happened. So, these were a long time coming, even though they’re still not yet available. We expect a release sometime in April of 2020 following the Pixel 4a launch event.

It’s officially “Spring” right now and the Pixel Buds 2 just cleared the FCC, so the release date is imminent.

All the release date rumors were completely wrong. And while Google’s new buds look 100% ready to go, with product videos and all, the company won’t let you buy them yet, even here in Spring 2020, which is frustrating. That said, they pack plenty of punch into a tiny package, so maybe they’re working on a few more features before releasing them to the public.

Unlike the first model, the “New Pixel Buds” are 100% wireless and come in a sleek tiny little carry case that’ll fit in your pocket. They’re pretty similar to the Airpods, honestly.

Google claims around 5+ hours of battery life while listening at high volumes, and around 24 hours of battery life with the included carry case and charger. Yes, the case charges the headphones. They’ll respond to “Hey Google,” and feature everything else we’ve seen lately from the Google Assistant. One feature, in particular, is the new long-range Bluetooth technology. You can leave your phone in your locker at the gym and your Pixel Buds will stay connected, sound clear, and fully work 100% anywhere in the gym. Google claims the connection works from over 100 yards away. That’s 300+ feet.

The new Pixel Buds 2 come in a variety of colors (Clearly White, Oh So Orange, Quite Mint and Almost Black) and are sweat and water-resistant, among other things. A Google VP recently posted this to Twitter, although these new headphones don’t quite hit every mark he wants. 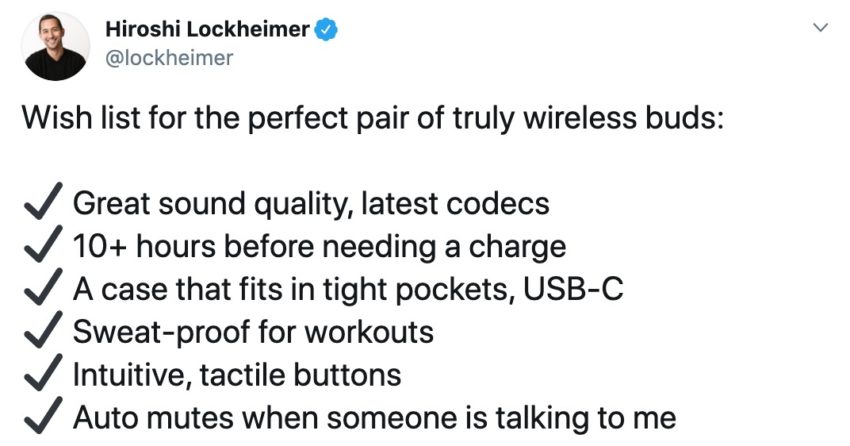 The original Pixel Buds were nice but they had more than a few shortcomings. A big one being that they weren’t truly wireless. It makes sense for Google to keep the design the same, but if they want to compete with Apple, Samsung, Bose and more, the wires had to go, and now they have.

Google’s new Pixel Buds will be available within the first few months of 2020, sometime this Spring, and will be $179. We’re expecting an April launch. Read on for more details.

Either way, there are several ways we wanted Google to improve the Pixel Buds 2 and make fans happy. Make them wireless, put them in a smaller case with wireless charging, add noise-canceling technology, and continue their efforts with translation and the Google Assistant. They’ve done all of that and then some, making these exciting products.

With that in mind, here are some reasons you might want to skip buying the current Buds and wait for the second-gen Pixel Buds to arrive.  We’ll also go over a few reasons they aren’t worth waiting for anymore.