There are six The Division 2 editions ranging from $59.99 all the way up to $250, but if you are coming in to the buying process late, you will need to pay much more for the super special edition. Most buyers will be looking at the Standard, Gold or Ultimate Division 2 editions. You need to spend a few minutes to figure out which bonuses and add-ons you want to pay for up front, and which you will want to wait and see before spending more money on. With a $50 price difference between the main versions of The Division 2, it’s important to do research before you buy this new game.

The two The Division 2 Collector’s Editions are out of stock with Ubisoft, but you can still find them at some retailers an on eBay if you are willing to pay a hefty premium.

Here’s how the different The Division 2 editions compare, what you get with each and what you need to know to figure out which one you want to buy.

Which The Division 2 Edition should I buy?

The Division 2 release date is March 15th, but you can play three days early with the Gold Edition and higher, letting you start playing on March 12th. There is no early access with other subscription services. The open beta is over, but you had a chance to get try out the game early without pre-ordering during that period.

If you pre-order The Division 2, you get The Capitol Defender Pack which includes “The Lullaby” Exotic SPAS-12 Shotgun and Hazmat 2.0 outfit. This is available at all retailers and you may find some extra bonuses out there.

The Division 2 is available at Best Buy, Amazon, Newegg, GameStop and other retailers. You can also buy The Division 2 digitally on Xbox, the PlayStation Store or through the Epic Games Store and Ubisoft.

The version of The Division 2 that most people will buy is the standard edition. This is $59.99 for PS4, PC and Xbox One. This includes the base game and the pre-order bonus that comes with all games. You can save $10 with a reward certificate when you pre-order at Best Buy, save 10% at Newegg and there are some other deals to be had.

Once you factor in the base game, you don’t get anything else with this version, which is to be expected for the base version of the game. You may miss out on the three day early access that more expensive editions get, but the next step up is a major jump, so you really need to know that you want the game before you switch from the Standard edition of The Division 2 to the Gold edition.

Casual players, and The Division players who loved the first game, but want to see how Ubisoft handles the release, patches and content before you spend an extra $50 to get the Year One Pass.

Buy The Division 2 at Best Buy, Amazon, Newegg, GameStop and digitally through Xbox, PlayStation or Epic Games for $59.99.

With The Division 2 Gold edition you get a lot of extras and this is the option that most hardcore The Division players will want to pick up. You get the base game and pre-order bonus. You also get to play the game on March 12th, 3 days before standard players. If you buy the physical version, you get a Steelbook, but you will pay more for it. You get a $10 with a reward certificate when you pre-order at Best Buy and save 10% at Newegg.

The big reason to buy The Division 2 Gold Edition is the Year 1 Pass. This is the reason for the $50 premium on the physical and the $60 premium on the digital. Oddly if you buy the Year 1 Pass separately, you will pay $40. The Year 1 Pass includes 7 day early access to all new year 1 episodes, 8 classified assignments, 3 new specializations and you get classified assignment rewards, an agent ward outfit , Scout emote and additional bounties and projects.

You can always buy this pass later, so unless you know you want it and you want to play early, or you really want a Steelbook skip this edition and go with the standard edition. 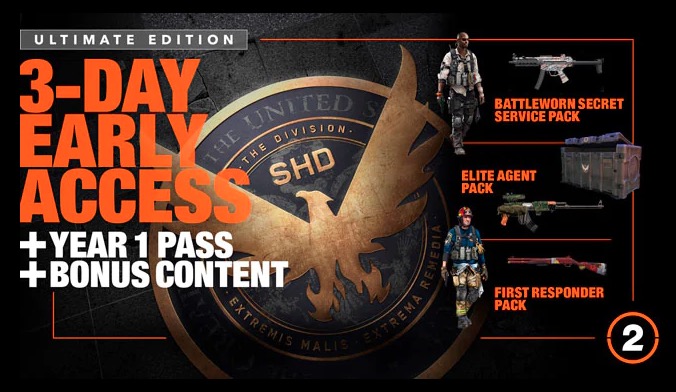 What you get with The Division 2 Ultimate Edition.

Gamers looking for the best bang for their buck without going to a full on collector’s edition will want to look into the Ultimate Edition. This is a $119 version of the game that includes three extras that you cannot get with the base or Gold editions, and that you will not likely be able to get later. The Ultimate edition includes;

These are players skins and weapon skins that change the look of your in game character. Ubisoft already confirmed they will be selling in-game skins throughout the life of the game, so if you want to save the cash and use it on skins that you can pick from later that is an option.

If you want the Year One Pass and the three skins and weapon skins this is the option for you. On the surface it looks like a better value than the Gold edition, especially the physical Gold edition.

Buy The Division 2 Ultimate Edition at Best Buy, Amazon, Newegg, GameStop and digitally through Xbox, PlayStation or Epic Games for $119.99.

What you get with The Division 2 Dark Zone Collector’s Edition.

Do you want everything that comes with The Division 2 Ultimate edition plus real world bonus items including a figure, map, soundtrack and lithopgraphs, plus in-game currency for The Division (2016)? If so, the Dark Zone Collector’s Edition is what you’re looking for. It includes;

This is sold out from Ubisoft, but is still available from Microsoft for $199.

If you are a massive fan, you may want to get the Phoenix Shield Collector’s edition. It is $250 and it includes everything from The Dark Zone edition, but instead of the small figurine, you get a articulating 1/6th scale Brian Johnson articulating figurine. It’s pretty amazing looking, but you will need to pay a premium.

Right now you can only find this on eBay and sellers are charging at least a $100 premium. If you think it is worth it, you can place a bid, but make sure you check feedback and realize you won’t likely have it on release day.

The Division 2 Disk or Digital?

You can buy The Division 2 on disk or digitally. It depends on how you want to play the game and if you want to be able to sell the game if you decide to move onto something else.

The standard edition is the only one that makes sense to buy physically if you think you might sell the game. If you buy the Gold Edition physically and claim the year one pass, you won’t be able to sell it with that pass and will take a big hit.

The Gold Edition makes the most sense to buy digitally since it is $10 cheaper and you get the benefits of a digital game. You don’t need to swap disks for example. This is an internet connection required game, so you’ll need the Internet to be able to play anyway.

With the digital version you can also pre-load so you can play immediately instead of waiting for the game to install and download a big update.